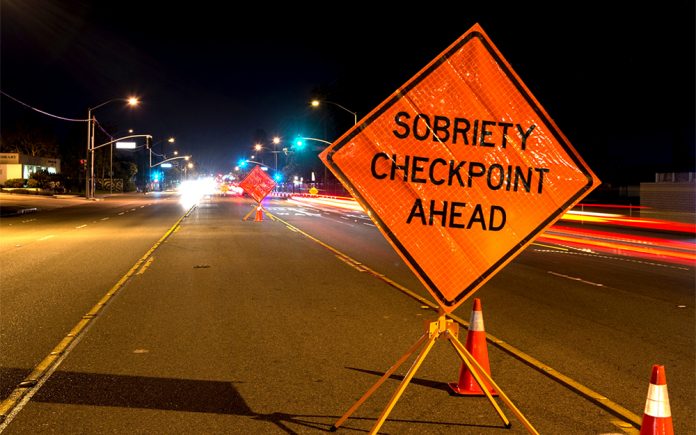 IF YOU DON’T BELIEVE THEY WILL BE OUT, THEN LEAVE THE LIGHTS ON FOR JIMMY HOFFA…and if you don’t know who Jimmy Hoffa was, look him up in the dictionary…UNDER CEMENT!

You can bet your “bippy” there will be Checkpoints between Christmas and New Year’s Eve, and throughout 2022! Many are bored with the Covid Hibernation restrictions, and thus drink to feel better. Then after drinking, the alcohol contributes to the use of bad judgement. The impaired person gets in the car to go to McDonalds or for a pizza… and you know the rest of the story.

Of course, DUI sobriety checkpoints are legal in 2021, and they are not a 4th Amendment illegal search and seizure violation… if the DUI Checkpoint complies with all the regulatory rules. Turning onto a side street or turning around before passing through a checkpoint is generally not against the law.

Your turning around should not, in and of itself, give the police a reasonable suspicion to make a DUI stop. However, the officer may be able to stop you if he observes any driving that would be sufficient for reasonable suspicion. Thus, slow or erratic driving, straddling the line or making an illegal turn could attract the officer’s attention, and he then could stop your car. Of course s/he could also make up Probable Cause.

To deter holiday drinking, Checkpoints are implemented to meet the increased number of people who will be drinking and driving. A word of advice, Use a Taxi, Uber or Lyft. They are a lot cheaper than getting arrested or being in an accident and having to call me the next morning.

The most important thing to know is that if you are stopped you be as polite as possible. The single most important thing to remember is what is listed in my admonition below about giving the card to the officer. If you show you are happy to comply with anything the officer wants, but you first want to get authority from your lawyer, then you will look like the good guy and the lawyer is the bad person.

Of course, the police are not going to call me or any other lawyer. However it will not look like you are avoiding the police, but rather that you are following your lawyer’s orders.

In the Coachella Valley, few realize we have more DUI FATALITIES…per capita, than anywhere else in California. That makes DUI Checkpoints and Saturation Patrols essential to save lives of the drivers …and ours. A saturation patrol is a large number of law enforcement officers making their presence known by conducting stops, targeting inebriated, distracted, aggressive and speeding drivers, as well as those with seatbelt or cell phone violations….the whole nine yards of traffic violations.

Remember: Silence is Golden and Handcuffs are Silver so DON’T TALK to POLICE without your lawyer’s permission. DON’T TALK WITH ANYONE ABOUT AN ACCIDENT OR CRIMINAL INVESTIGATION WITHOUT YOUR ATTORNEY’S PERMISSION. IT IS OFTEN NOT WHAT YOU SAY BUT WHAT THEY THOUGHT YOU SAID.

Though often referred to as a DUI criminal defense lawyer, I choose to not view my DUI clients as “criminals”. I prefer to view them, and more importantly to treat them, as good, honest people that have found themselves in a scary and unfortunate situation after screwing up.

I look upon my job as protecting the Constitutional Rights of every American who drinks, drives and gets arrested for a DUI or has an ACCIDENT.

I do however “Change Hats” when I SUE Drunk Drivers for damages to my Injured or Deceased (Wrongful Death) clients.

REPRESENTING  THE INJURED AND CRIMINALLY ACCUSED