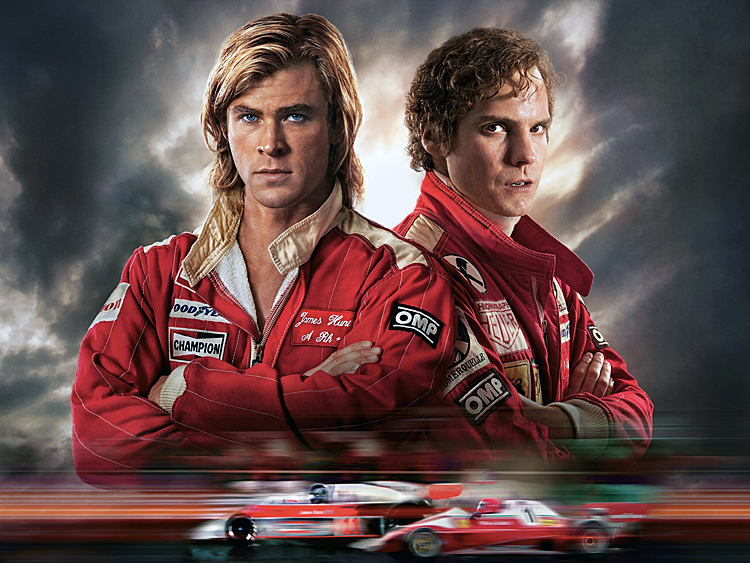 Whether in front of or behind the camera, Ron Howard has been making movies almost all his life. His first time as a feature director was 1977’s low budget car chase GRAND THEFT AUTO.

Howard has come full circle with RUSH, a sleek, slick and satisfying race movie about the intense true life rivalry on the mid 1970’s Formula One circuit between handsome British playboy James Hunt (Chris Hemsworth) and the more serious minded, plain-looking (“rat-faced”) Austrian Niki Lauda (Daniel Brühl). Hemsworth and Brühl are uncanny physical matches to their real life counterparts (both of whom are briefly seen in the closing credits). 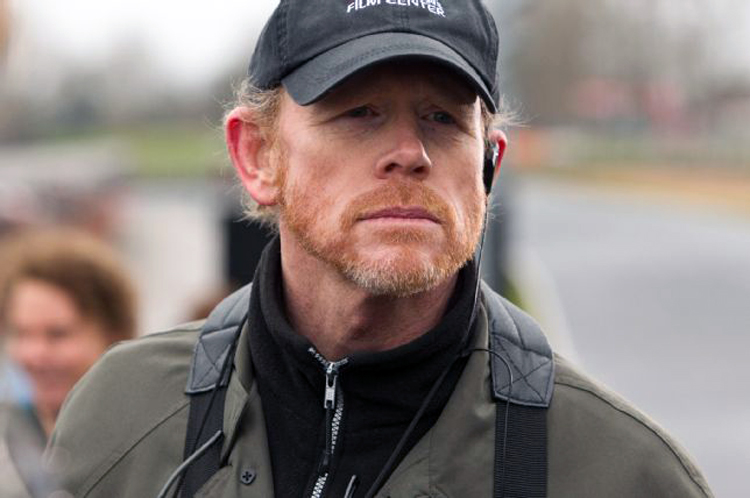 With RUSH, two-time Academy Award© winner Howard has made perhaps his best movie. There’s a foreign film vibe to this tightly edited, lean, artistic production that is loaded with up close racing sequences that focus on the personalities of the two competitors in a blazing season that many Brits and Europeans well remember (the film is already a big hit in the UK).

Hemsworth captures the arrogance, swagger and playboy charm of Hunt. But none-the-less, he is clearly the villain of the piece. While perfectionist Brühl may not be a full-fledged hero, it is he for whom we root.

The mix of what must be CGI and stock footage with recreations of the exciting races is unusually adept and creates an impressionistic canvas of what it’s like to present in the driver’s seat and in the stands. It deserves to be seen on the biggest screen possible.

The period feel of the era is meticulously realized. The supporting cast, especially the women in the lives of the two leads, are subtly nuanced. Olivia Wilde is model Suzy Miller who becomes Hunt’s wife (and Richard Burton’s mistress). Alexandra Maria Lara, in several nearly wordless scenes, is extremely effective as an understanding Marlene Lauda who clearly loves her complicated husband. 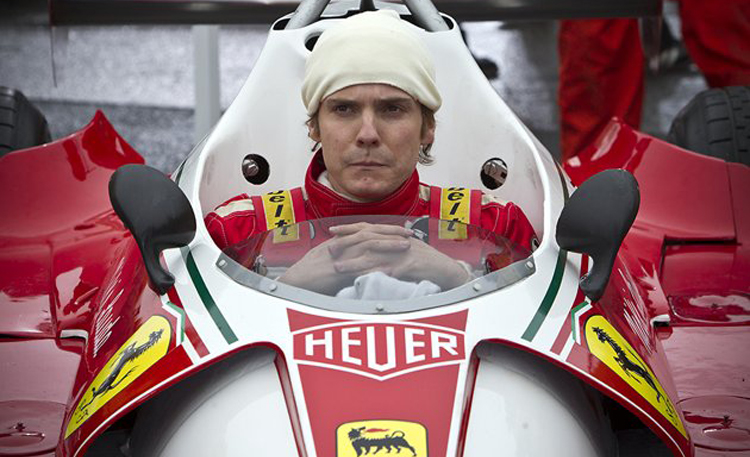 I wish the film had been even louder during the racing sequences and even though Hans Zimmer’s bold score is pumped, I wanted the seats to vibrate.

This is an adult, R-rated film. It is not a deep story and the surprises and reveals are in the truth of what actually happened during that unforgettably competitive racing year. I was emotionally involved, especially during the second half. Recommended. Now playing at Cinemas Palme d’Or.

WE ARE WHAT WE ARE 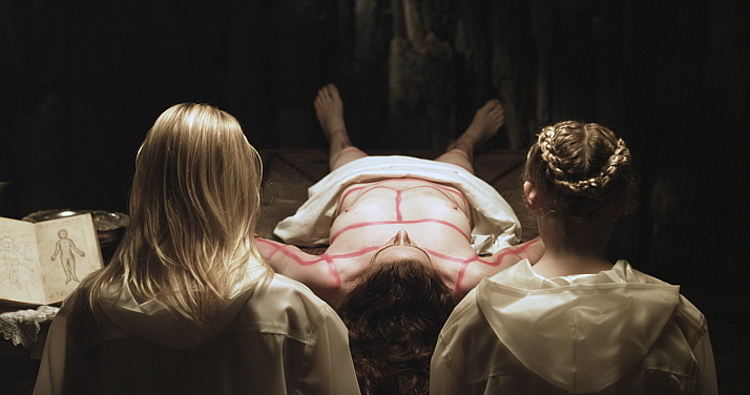 Not yet showing locally, this loose reboot of SOMOS LO QUE HAY may be about something more than superficial genre horror it is disguised as. At least I think it is. In some ways, it might be about what happens when a seemingly wholesome — perhaps deeply religious — family, the Parkers in this instance, are isolated and cut off from the wired world the rest of us glibly share. In secret, father Frank maintains his ancestral customs, no matter what. When a big storm unloads its rain and wrath, daughters Iris, Rose and brother Rory are forced into a new position of family responsibility for which they are ill prepared. 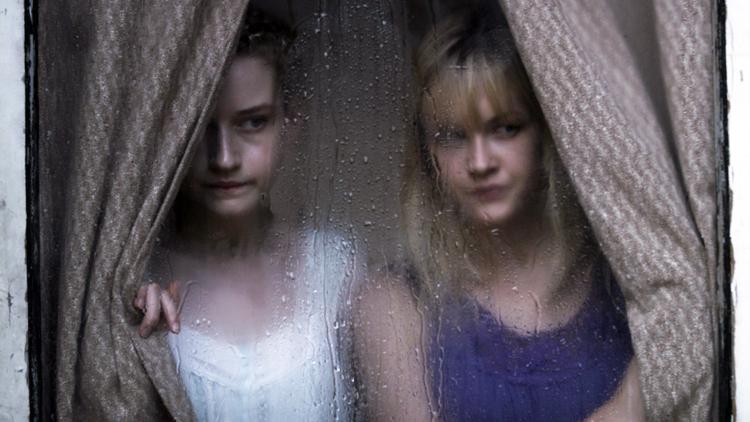 As the rain comes down and the waters rise, secrets the family has kept hidden for generations are slowly revealed. Locals, including a Doc Barrows (Michael Parks), build a case against the Parkers and an inevitable showdown looms. And when it arrives, it is indeed a whopper. Ambyr Childers, a part time resident of the CV, is riveting as the blank-faced, wide-eyed teen Iris. Director Jim Miklis has a sure hand and a great eye for visual metaphors that imply a hell of a lot more than what’s overtly on the screen.

NOW AVAILABLE FOR THE HOME THEATER:

As Halloween draws nigh, this is a good time to checkout horror for the home screen.

NOTHING LEFT TO FEAR

Supposedly “inspired by the legend of Stull, Kansas,” this first production from producer Slash’s Slasher Films is about a pastor, his wife (Anne Heche) and family who move to a seemingly sleepy Kansas community of friendly people when a series of horrific incidents greet them. Their teenage daughter is tormented by grisly visions and her younger sibling has been marked for a depraved ritual. And get this; deep within the heartland’s darkness, one of the Seven Gates of Hell demands the blood of the innocent. Why, you might rightly ask? So that “creatures of the damned” can be unleashed. Don’t you hate it when that happens? This first film from Rock & Roll Hall of Famer was written by Jon Mills and directed by Tony Leonardi III. Slash said, “As a long time fan of the horror genre, I want to produce films that are in an older tradition of this genre. That is to say, films that leave more to the one’s imagination that are psychologically scary and character driven; films that what scares you is more cerebral than superficial. Slasher Films is my vehicle to realize that aim. NOTHING LEFT TO FEAR is the first film with more to come.” Anchor bay. Blu-ray

THE LORDS OF SALEM 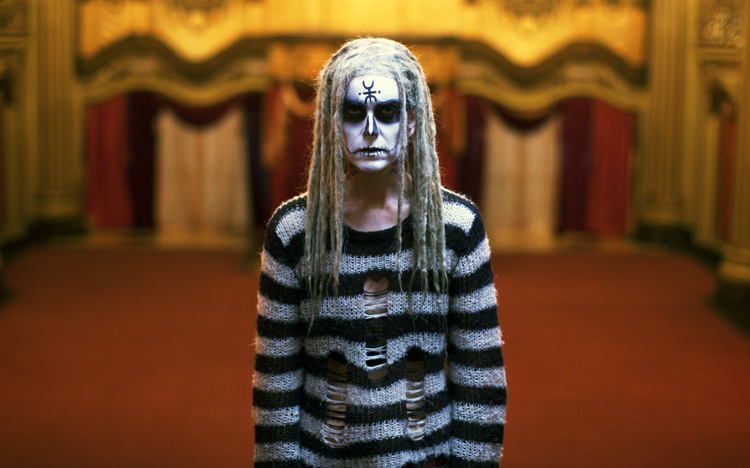 From the demented mind of horror maestro Rob Zombie comes this chilling descent into an evil, nightmare world. Heidi (Sheri Moon Zombie) is a radio DJ working in Salem, Massachusetts, who receives a peculiar wooden box containing a record – it’s a “gift from the Lords.” When Heidi listens to the bizarre sounds embedded deep within the grooves they trigger flashbacks of the town’s violent past. But is Heidi going bonkers or are the “Lords of Salem” returning for bloody revenge on modern day Salem? The single bonus on this disc is a crazy fascinating commentary from Writer/Producer/Director Rob Zombie. Caveat emptor: This nerve-jangling fever dream will assault your senses. Anchor Bay. Blu-ray.

Not as witty as the original, this fourth installment in the franchise is also a kind of reboot of Sam Raimi’s clever, immensely entertaining 1981 original. But make no mistake, the reboot is filled with bloody brutal and gore.
At it’s center is the reliable Book of the Dead that still has the power to conjure violent demons on a quest to possess five young kids too naïve to have not known about the three previous films. Fede Alvarez directs without restraint. Lots of extras on the BD edition. Tri-Star/Ghost House. Blu-ray

THE SPY WHO CAME IN FROM THE COLD 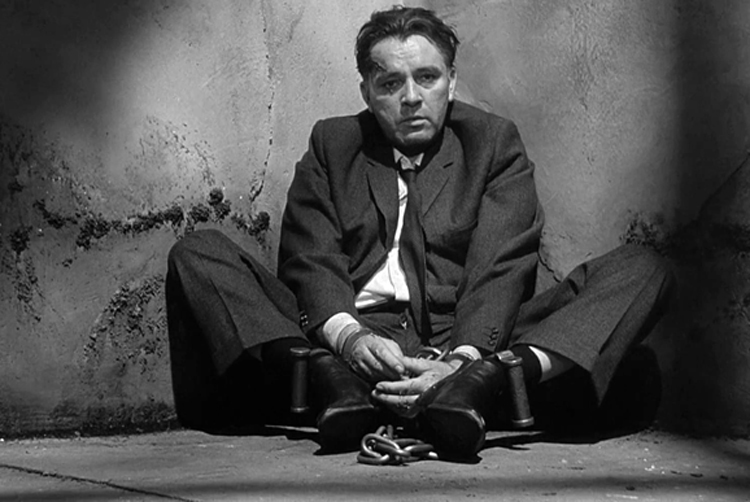 Martin Ritt’s 1965 movie based on the 1963 novel by John le Carré gave Richard Burton one of his best roles as British secret agent at the end of his rope. Reassigned from fieldwork, Burton’s character, Alex Leamas, is sent on a mission to “defect” behind the Iron Curtain. To make it seem more real, once in East Berlin, Leamas goes on an alcoholic binge. The beautiful black and white cinematography by Oswald Morris is as gritty as the complex plot of crosses and double-crosses. As with most Criterion titles, there’s a rich trove of bonus material including two terrific featurettes on le Carré as well as a conversation on “Acting in the 60’s” with Burton and critic Kenneth Tynan. Criterion. Blu-ray.