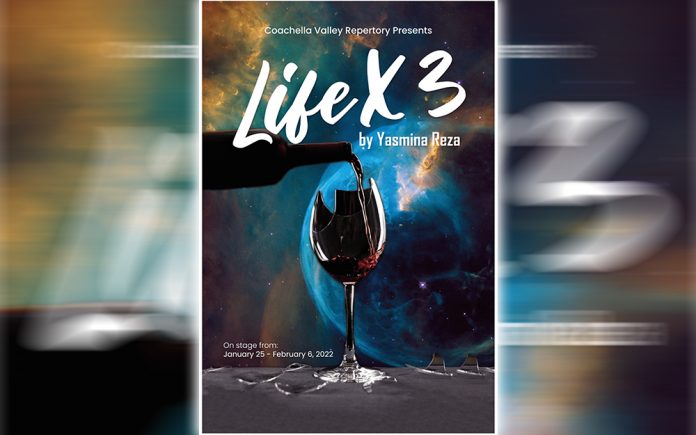 CVRep continues its season of Hopes, Dreams, and Expectations 2021-2022 with Life X 3, written by Yasmina Reza, directed by Joanne Gordon, January 25 – February 6, 2022. An incredible cast makes this a must-see play, starring Charles Pasternak, Lynn Favin, Betsy Moore and Scott Golden. From the author of Art, a sharply funny commentary on vanity, insecurity, and marital vicissitudes, Life X 3 presents three versions of two couples (and an offstage six-year-old) trying to make a success of one evening despite the fact they neither like nor respect one another. Tickets and subscriptions are on sale now at www.cvrep.org or call the box-office at (760)-296-2996 ext. 115.  Cast bios, photos, and/or interviews are available upon request. Contact Alexandria, (760) 296-2966, extension 119.

The play contrasts man’s ability to understand and map the outermost reaches of the universe with his total inability to deal rationally with the simplest domestic mishap, and explores how the smallest action can cause a life-altering event. This play contributes to an increasingly impressive body of work from one of the most intriguing and distinctive voices in contemporary theatre with a fresh, funny and ultimately thought-provoking style.

Henry and Sonia are having a difficult evening with Arnaud, their wakeful six-year-old son; but Henry has other worries. About to publish the results of two years’ research on the flatness of galaxy halos, he’s desperate to make a good impression on the distinguished astrophysicist Hubert Finidori, who wields a decisive influence over the question of Henry’s longed-for promotion. When Hubert arrives with his rebellious wife, Inez in town for dinner on the wrong night, the fact that there is no food in the apartment (merely an ample supply of Sancerre) is only one of the potentially disastrous elements in the play. In addition, Hubert’s often brutal treatment of Inez; his lust for Sonia; Inez’s weak head for alcohol; Henry’s discovery that rival scientists may have beaten him to the punch; Sonia’s equivocal feeling of attraction towards Hubert; and the entirely unpredictable behavior of the invisible Arnaud—and the stage is set for a catastrophic unraveling of normal civilized behavior.

Award winning director and actor, Charles Pasternak stars as Henry and has previously starred in CVRep’s Male Greek Chorus in How I Learned to Drive (Desert Star Award Nomination), directed by Joanne Gordon. During the pandemic, Pasternak directed three staged readings for CVRep: The Importance of Being Ernest, Much Ado About Nothing, and The Revolutionists. Starring as Henry’s wife Sonia is Lynn Favin. Favin has held leading roles on 3 National Touring Shows (Ophelia in Hamlet, Lily in The Giver, Narrator in The Grapes of Wrath) and performed many of Shakepeare’s greatest female characters professionally across America and in the UK. She is a recurring voice actress with 17 characters on the Emmy Award winning show Robot Chicken: Seasons 8-11 and has numerous TV/Film credits including The Get Down (Netflix) and multiple national commercials. Scott Golden stars as Hubert and is thrilled to be back at CVRep where he recently starred as Gabe in Dinner With Friends. Golden’s stage credits include Absolutely Filthy (Sacred Fools), The Behavior of Broadus (Burglars of Hamm) and most recently as Matt in Mr. Burns; a post-electric play (Ovation Award nominee). The character Inez is played by Betsy Moore. Moore’s most recent theater credits include Colleen in Ripcord, Puck in A Midsummer Night’s Dream, and Miss Lynch in Grease at Sierra Repertory Theatre. Her recent film and television credits include This is Us (NBC), The Flight Attendant (HBO), The Baxters (MGM) and the feature film Stu starring Mark Wahlberg.

Returning to CVRep’s stage is award-winning director, Joanne Gordon. Gordon was previously the Professor Emerita and former Artistic Director of California Repertory Company and Chair of the Department of Theatre Arts at CSULB (2004-2013). Gordon’s accolades include five Drama-League Awards, a Los Angeles Critics Choice Award, Woman in Theatre Red Carpet Award, Long Beach Playhouse Diva Award and being named “Best of the Year” by the Los Angeles Times. In the past, Gordon directed staged readings of The Clean House and The Golden Fleece as part of CVRep’s virtual Theatre Thursdays series. She was also the moderator for CVRep’s Luminary Cocktail Hour with Alexandra Billings, actress, singer, author, teacher, and activist. While internationally renowned for her work on Sondheim and the dramatization of the work of Charles Bukowski, Gordon’s most recent work with Alexandra Billing “S/He and Me” has provoked great deal of attention and interest. Her adaptation and production of Love, Bukowski was nominated for several awards by the Los Angeles Drama Critics Circle, which also conferred on Cal Rep the Polly Warfield Award. Love, Bukowski was nominated for Best New Play of the Year by the O.C. Weekly. Gordon has directed a number of Stephen Sondheim works worldwide, including the first Chinese language production of West Side Story in Beijing. Published work includes Stephen Sondheim: A Casebook; frequent contributions to The Sondheim Review and Art Isn’t Easy: The Theater of Stephen Sondheimone of the seminal studies of Sondheim’s work. As an internationally renowned Sondheim scholar, Gordon directs and conducts workshops in the U.S., Russia and Europe. Her essay Something Just Broke was included by Oxford University Press in The Oxford Handbook of Sondheim Studies (2013). Gordon did her undergraduate work in South Africa and her Ph.D. at UCLA

CVRep’s top priority is the well-being and safety of patrons, employees and volunteers. All CVRep patrons, staff, and volunteers are required to be fully vaccinated, and must show a picture ID with their vaccination card upon entering the building. It is required that all patrons, staff, and volunteers wear masks at all times during performances. The Playhouse is equipped with an advanced air handling system which sanitizes the air. Hand sanitizing stations are located throughout the Playhouse. To limit contact, all tickets are issued electronically. In addition, the theatre undergoes a thorough sanitization and deep clean prior to each show.