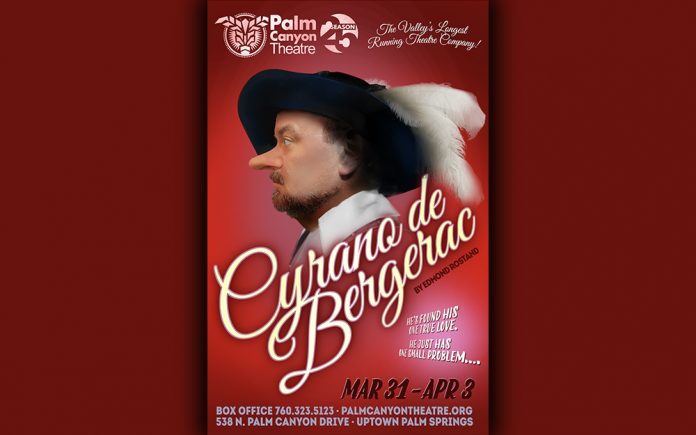 Panache, a French word that refers to a flamboyant manner and reckless courage, derived from the helmet-plume worn by Henry IV, King of France from 1589 – 1610.  The word was first introduced into English language by writer Edmond Rostand in his historically acclaimed play, Cyrano de Bergerac. Written in 1897, it is a fictionalized account of the life of a real man. 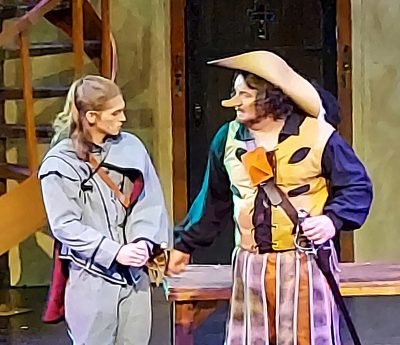 On December 27, 1897, the curtain rose at the Theatre de la Porte Saint-Martin in Paris and an hour after the curtain fell, the audience was still applauding. Since its Paris debut over 200 years ago, Cyrano de Bergerac has been translated into a multitude of languages, produced internationally thousands of times and adapted for stage, musicals, television and film.

Its longest Broadway run was 232 Performances in 1923 and on March 31, 2022 Cyrano de Bergerac opened at the Palm Canyon Theatre in Palm Springs.

Set in Paris, in the year 1640, a brilliant poet and swordsman named Cyrano de Bergerac (Michael Pacas,) finds himself deeply in love with his beautiful, intellectual cousin Roxane (Katrina Dixon.) Despite Cyrano’s brilliance and charisma, an abnormally huge nose over shadows his appearance, and he considers himself too ugly to risk telling Roxane about his feelings.  Roxane, professes her love for Christian (Cameron Keys,) a man with a beautiful face, but little wit or intellect.  Doubting his own ability to receive love, Cyrano agrees to help Christian win Roxane’s heart through his talent with words and poetry.  Cyrano’s words are spoken by Christian as Cyrano hides in the shadows both literally and figuratively, while witnessing his gift of prose serve to benefit another man.

For all of his Panache, wit and intellect, Cyrano has little belief in his ability to be loved.  Michael Pacas, in the titular role, is every bit the tragic hero with a fatal flaw that the story calls for. From the moment Pacas, enters the stage, his swashbuckling performance is filled with a raw energy that captivates the audience and refuses to let go until the final scene. Cyrano de Bergerac, is classified as a romantic tragedy, although Rostand actually referred to it as a heroic comedy.  Either way this story inflicts a dagger into the soul of the human condition. 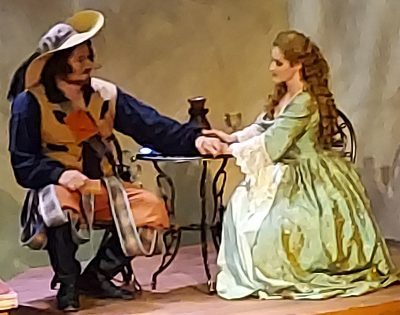 Roxane, the beautiful, charismatic, and intellectual cousin of Cyrano de Bergerac, is elegantly portrayed by Katrina Dixon. She is a woman who is attracted to a handsome face, but falls in love with poetry and wit. Dixon’s genuineness is so perfectly conveyed. She is trapped in a time when a woman’s role was to marry well, but instead she seeks to fulfill her intellect and pursue a man whose words, (she believes,) feed and nurture her soul and quinch her thirst for mental stimulus.   Dixon’s vulnerability and strength in this role rival any who have performed it before her.

Cyrano de Bergerac is a grand, 17th Century, sword-fighting, bravado filled, epic story and Director Dr. William Layne, encapsulates the world perfectly in his direction.  A talented ensemble fills the stage for this big scale production and Layne stages and balances the scenes with great skill and an eye for authenticity. He has brought out the best in these actor performances. I especially appreciated the use of the nuns and their entertaining moves in changing scenes.  It was truly one of the most creative ways of using supporting characters for scene transitions, that I’ve seen. 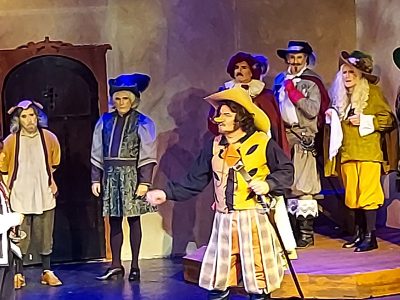 J.W. Layne’s Scenic and Lighting design, Derik Shopinski’s costumes and Nick Campbell’s sound, enhanced this production so immensely and proved once more how a great production team and an iconic script can truly showcase the best of what theatre is meant to be.

Cyrano de Bergerac is a iconic play that deserves deep appreciation, not just as it is being performed, but also after the curtain falls. Its message is thought provoking and its characters are timeless in their human struggles.

Cyrano de Bergerac is on stage at the Palm Canyon Theatre through April 3rd. I encourage you to not miss this production of this classic play.