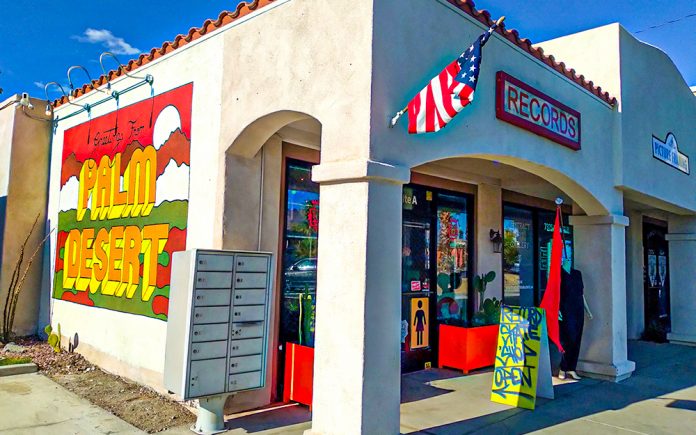 What started out as an idea for a funky, weekend popup in a modified vehicle has, over the past year turned into something so much more. More than just a record store/skate shop. More than a place where one might score some hard to find threads, either new or vintage. More than a gallery that provides a bit of wall space for a few local artists. Dale’s Records in Palm Desert has been evolving into somewhat of a community hub where local musicians can perform to all-age audiences who have been starving for live music for over a year. 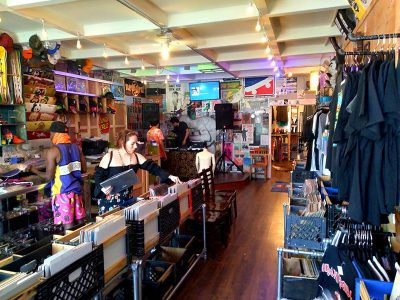 A graduate of Palm Desert HS, Dale Myers has spent the bulk of his life as a desert dweller. After his stint in the Airforce didn’t pan out into a career, he eventually found himself running our beloved local spot that sadly is no more, The Record Alley.

Myers: “I ended up at The Record Alley after leaving the Airforce back in 95 so, I was there for about 21 years. After I left Record Alley, I started a mobile record store which was pretty fun. We would take it to bars, popups and whatnot. I did that for almost 2 years until the transmission went caput. At that point I sold my house and opened this current spot with the intention of only being open on weekends. I had started working at The Ace Hotel as an engineer and fully intended on staying there a while so I could have benefits and some security. Next thing you know, Covid hit and I went from 4 days a week at The Ace to no days a week.”

CVW: So the circumstances under the shutdown ended up helping your business grow?

Myers: “Basically. A lot of people had extra time on their hands with nothing to do and the mall was closed which probably helped.”

CVW: So, the sign outside says, “Records,” but there is a whole lot more going on in here, right? 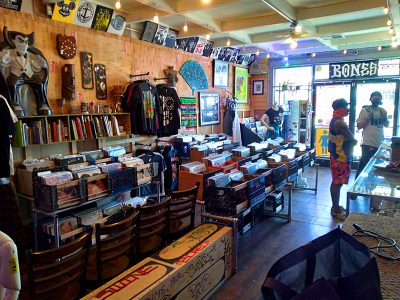 Myers:  “Oh, definitely. I started out with records. Besides “The Record Alley,” we didn’t really have any other indie record stores. Growing up here, at one point I think we had five, in Palm Desert alone. As far as skate shops, we had a few over the years. Sports Fever was around forever, and there were a few others in between until “Industry Ride Shop” popped up and kind of took over for some time. We always had our own little independent shops and eventually they were all gone. So the kids were basically all left to either go to the mall, shop online, or go out of town. The idea was that being just a record shop isn’t going to work by itself any more than just a skate shop will. So pairing one situation that won’t work by itself with another situation that won’t work by itself somehow balances out and works.”

CVW: You also have a pretty rad selection of vintage clothing. Where do you acquire these pieces?

Myers: “All of my vintage stuff comes from my girlfriend who has a store called, Peach Whiskers. It’s off San Pablo here in Palm Desert so everyone should go check it out.”

CVW: Over the past few weeks I have been here a couple of times for shows which were a lot of fun. But, even being here today it seems like more than just a retail store. It seems like a bit of a hangout spot in the community. Was that your original intention?

Myers: “Not exactly, but growing up out here, it seems like it was always part of the culture that these kinds of  places you would go to were the places where you would hang out and you engaged with the people who worked there. I mean, even when it gets to be a bit much…in the long run, these are the people who are paying my bills. They’re respectful and they’re not rowdy. Nine times out of ten these days, they’re coming in to get out of the heat and that’s okay with me.”

CVW: Let’s talk about the shows that you have been throwing here at the store. Was that something you always intended on doing? 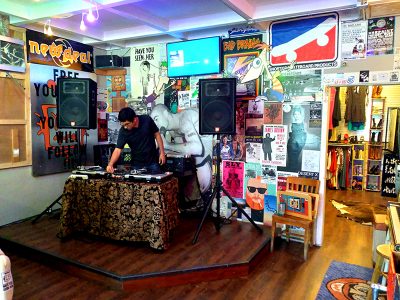 Myers: “Absolutely! As soon as I decided on this space I pointed to the corner and said, “That’s where the stage is going.” It’s not big but it’s enough to make a presence. I basically built the rest of the store around it. These aren’t big shows….clearly, we are limited by space but they have been a great time so far.

You know, over time, I fully intend to have some of the bigger, local bands that have a big draw come in and play but, I also want to be a place that showcases the kids who have no place else to  perform. The 16 year olds who are basically screwed because, pretty much the only other venues out here are bars. Here, their friends can come see them play. This has been panning out as an opportunity for young musicians, which is always something that I wanted here and we’ll keep doing it.”