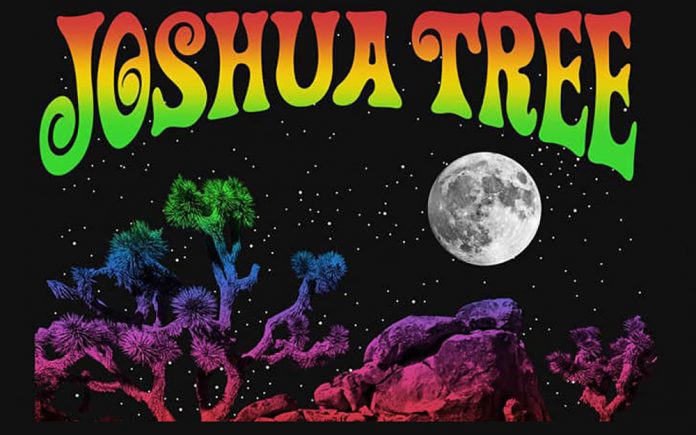 It had to be divine choreography. I can’t explain how I was able to attend this otherworldly event other than to say, with tours and live music performances returning like a tsunami, I wanted to follow up with artist, producer, tequila aficionado, and friend, Dave Catching, at the renowned Rancho De La Luna recording studio. Catching generally celebrates his birthday doing what he loves – playing music locally with his uber talented colleagues. I was happy to learn he had two upcoming shows scheduled: a fundraiser for the Joshua Tree National Park, and an outdoor show at Pappy & Harriet’s. Fan girl that I am, as soon as we ended the conversation, I went online to purchase tickets. I knew both shows would be significantly special, not only because of the performers, but each of these venues are weighted with their own unique magic. Somehow, I was one of 100 who were able to purchase tickets to the fundraiser that sold out in ten minutes. All 100 of us expected it to be great. All 100 of us underestimated. 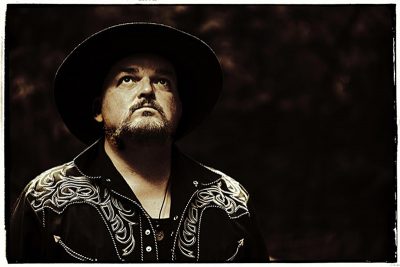 For the first time in over a decade, a concert was held “beneath the desert stars” inside Joshua Tree National Park. Attendees were met by two tour buses at Joshua Tree National Park Association in 29 Palms, and taxied to Indian Cove, a pristine, organically breath-taking little amphitheater surrounded by the signature granite walls of the park. Park Rangers were on hand to make sure park rules were adhered to, and staff were on hand to monitor volume and make note of wildlife response to the music.

Alain Johannes, set the stage to “game level: surreal” as the first performer.  Founding member of alternative rock group Eleven, who has performed and produced with QOTSA, Them Crooked Vultures, PJ Harvey, Chris Cornell, Arctic Monkeys, Mark Lanegan, and The Desert Sessions. His signature voice blending with his special Matty Baratto* made 8 string, cigar box guitar, tuned in 4ths in the key of C, soared into the sacred stones of the cove. Having survived a painful battle with COVID, being able to perform again held a lot of emotion. “It’s been tough,” said Johannes. “It’s left my lungs pretty messed up, so there are days that are better for singing than others.” Listening to him in this unforgettable setting, revealed no such struggle. This first performance after lockdown, as well as his first-time performing songs off his new album to a live audience, “Couldn’t have been a more magical setting and with a better group of fellow musicians and music lovers,” Johannes shared. “It was quite intense setting up all those hours in the heat and intense sun, but once the sun set and I got up to play, it was like a dream, really. One of the best experiences I’ve ever had.” 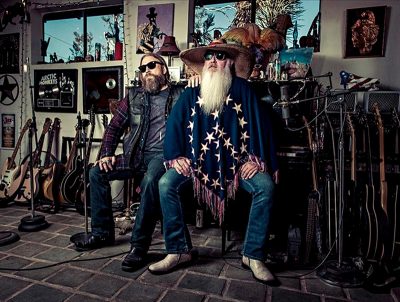 Next, as earthlings? queued up, the sky was dark, and the crescent moon was rising center above the stage. When they opened their sound ensemble of powerful vocals, teaming guitars, and dynamic rhythm section, with spacy keys and synth supporting. It was jaw dropping. earthlings?, created and based in Joshua Tree in 1994, was originally a collaboration with Pete Stahl (Goatsnake, Scream) and Rancho de La Luna owners David Catching and the late, Fred Drake. It has many moving parts today, and in my opinion, has significantly raised the bar for music not only in desert, but on the world stage. The level of intuition and creativity, coupled with the undeniable talent depth of each player, created a musical experience that can only be described it as “free” – free of genre boxes, free of conventional rules, free of individuals, free of single player solos, and free of predictability. They presented a melodically, fearless expression of sound, as they worked together as one, to create something worthy of the heavenly host of stars their music rose to meet.

When asked about the show, front man and founder, Pete Stahl, shared, “It was always a dream of mine to have my band play in the park. Honestly, it was a lot of work, but good work, where we all made it happen together. It was very fulfilling, in the end, to do something that benefits our community and the park. We have been using the park as a mixing room, so to speak, since it was deemed a monument. We’ve always taken mixes from the studio to listen to them out there!” Stahl’s band SCREAM had done shows acoustically during the lockdown – one at the Viper Room in LA to benefit Save our Stages, and one at Dodger Stadium to benefit the front-line health heroes, promoting vaccinations. “Both of those shows were live streamed in front of small audiences,” Stahl added. “These shows were back to the real thing.”

Mojave Lords came to the stage, and gently ripped open the sky. “Powerful” is the best descriptor, but not relative to their electronically amplified power or volume, but to their delivery. It was clear this stony venue had a powerful effect on everyone, but it was strikingly obvious with Mojave Lords. They came in like the lords of thunder and rain, as if they’d been handpicked by the gods as the house band for this sacred parcel. Lead singer, Bingo Richey, delivered with a voice rich and wonderfully exposed in this setting. His messages delivered with intense eye to eye contact went through you, and the band followed his lead like a monsoon chaser. “We could feel how magical it was going to be when we arrived, shared Catching. “That space coupled with the fact that most hadn’t been to a concert in 16 months, made it an extraordinary event.”

This spectacular show was produced by Desert Institute at Joshua Tree National Park Association, a private, non-profit Cooperating Association working in partnership with Joshua Tree National Park to help in its achievement of programming goals in education, interpretation, scientific and historic research and activities. They are coordinating very closely with their partners at Joshua Tree National Park on this series. The events are of course permitted and monitored. “A great deal of preparation went into the planning and execution of the concerts, and we at JTNPA greatly appreciate the musicians, support teams, and staff who have worked so closely and seamlessly together to make the shows a reality,” shared Jacqueline Guevara, the organization’s Executive Director.

The show that followed on Saturday at Pappy & Harriet’s, now under new ownership, felt like a homecoming to me and many of the attendees. It felt the same to the bands. “The new owners of Pappy & Harriet’s, Lisa and JB, made it extremely easy, and were especially accommodating,” said Catching. “The crowd couldn’t have been cooler. Almost everyone from the benefit also attended Pappy & Harriet’s. It was fantastic to see everyone’s smiling faces, to see people dancing and laughing. It is the greatest feeling in the world. The appreciation level between bands and attendees was definitely huge, and mutual!”

Stahl explained, “Both shows were completely different, and we approached them as such by crafting the sets to fit each venue. Especially with the Indian Cove show, we wanted to take advantage of the natural acoustics of the amphitheater by playing songs that are less loud than what we played at Pappy’s. We wanted to fill its space and acknowledge the land that surrounded us with our music, and honor that tradition.” 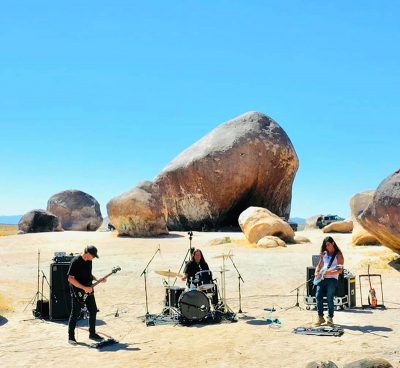 “Like two sides of a coin,” said Johannes. “One was almost spiritual, the other celebratory – a party like atmosphere. I enjoyed both tremendously and they remain as a single experience that brought healing, renewal, and hope.”The next concert in the series will be held July 17th featuring more desert music icons: Yawning Man, Sean Wheeler, Bad Otis Link, Kate McCabe, and Mathias Schneeberger.

“This performance is such a honor …It truly is,” shared Mario Lalli of Yawning Man. “Playing our music in the beautiful environment of the Joshua Tree National Park …we are very excited! The entire evenings performances are directly inspired by not just the beautiful mysterious desert landscapes, but the culture and stories that evolve from its unique impact on the people that make their home here.” 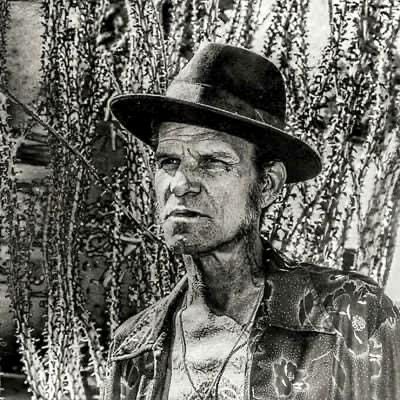 When asked what to expect from the show, Lalli shared, “Yawning Man will be playing new music as well as do some stretching out and improvising. Sean Wheeler is performing in collaboration with artist Otis Link, bringing his stories, poems, and folklore to life from his book “Dry Heat.” We will be projecting the art and illustration from Otis Link on a screen behind the stage. Sean will be accompanied by members of Yawning Man and Mathias Schneeberger, creating an ambient score to Sean’s stories and visuals.”

“Known Unknowns is a visual tribute to new beginnings. Filmed during the pandemic in 2021, Kate McCabe’s landscape film aims to convey that fresh starts and perspectives are realizable, that every day reveals a unique array of possibilities. The film contains 21-time lapse sunrises, each with its own distinctive soundtrack, each with an iconic desert expanse appearing out of darkness into first light. Known Unknowns reminds us that we carry on, despite the relentless passage of time. This screening is the film’s West Coast Premiere.” 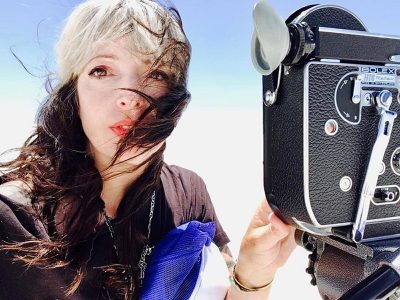 “Filmmaker and interdisciplinary artist Kate McCabe founded the art collective Kidnap Yourself near Joshua Tree in 2005 soon after graduating CalArts with an MFA in Experimental Animation. Her films have screened internationally and most recently at the Palm Springs Art Museum, as well as streaming as part of a Canyon Cinema collection through Kinoscope. Since 2008, Kate has published a book series about her life in the desert, “Mojave Weather Diaries” now included in the Luna Arcana. She has worked as both an educator and artist, exploring themes of our communication mishaps and our connection to the landscape.”

As I write, tickets are still on sale. They can be purchased online at Beneath the Desert Sky Summer Concert / Saturday, July 17 Tickets, Sat, Jul 17, 2021 at 7:00 PM | Eventbrite. I strongly suggest you experience this while you can.