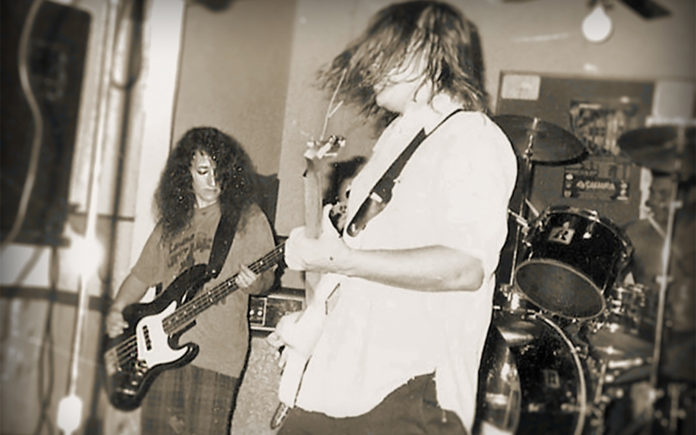 A Brief Overview Of Their Oeuvre, Yes I Said Oeuvre.

Desert Rock legends Dali’s Llama celebrates their 25th anniversary this year. The band will be commemorating the milestone with a set at the Hood on Friday, March 9th. The evening will also feature performances from old pals like Decon, the Hellions, the always voluble Sean Wheeler and Godfather of the Desert Scene, Mario Lalli, (Maybe for the night he can be Mario Llalli!).

Zach Huskey, long considered a forefather of Desert Rock, has been making music since he hit puberty. He got his start in the early ‘80s, fronting nascent bands like The Sciotics, Blue Sunday, Cloudy Daze and The Next. During this time, he began dating his future wife, Erica Faber.

Following high school, the couple relocated to Los Angeles and Zach first formed Long, Dead & Gone and then My Pain. Each band achieved a modicum of success in L.A., sharing stages with Wool, White Zombie and Rage Against the Machine. They also regularly returned home to play the covert generator parties that happened deep in the desert. By the early ‘90s, inter-band conflicts and the rigid “pay-to-play” policies implemented by Sunset Strip venues had begun to take its toll. Erica had become proficient on bass, so the duo returned to the desert, found a drummer (the first in a series), and formed Dali’s Llama. 25 years, 11 albums, one vinyl retrospective, a three song EP and seven drummers later, they’re a Desert institution.

The band will head into the studio later this year, but if you’re currently jonesing for some magically Zach-licious Rock N’ Roll, maybe this is the right time to revisit Dali’s Llama’s Extensive back catalogue.

“PRE-POST NOW” (1993) To paraphrase Julie Andrews in the “Sound Of Music,” let’s start at the very beginning, since it’s a very fine place to start. Dali’s debut arrived in September of 1993, and the Power trio’s sound was equal parts Post Punk and Power Pop. Zach’s snarly vocals ride roughshod over his fluid guitar, Erica’s rumbling bass lines and Johnny Moreno’s walloping back-beat. Highlights include kaleidoscopic crunch of “Pretty Colors,” the crisp economy of “Sky” and the fluttery epic, “Art And Meditation.”

“CREATIVE SPACE” (1994) Less than a year later the band was back, doubling down on the winning formula of their crackling debut. Stand-out tracks include the deadpan ruminations of “In General” and the quiet-loud dynamics of the title cut. Then there’s the bratty declaration of “Listen” and the snarly see-saw of “N.O.R.” which offers a brittle treatise on the perils of working retail when you’re battling a cold, (and you’re Zach).

“BEING” (1995) The most fully realized record from Dali’s Power Punk Trio era, it features new drummer (and L.A. compadre), Ian Dye. From the frenetic “Just A Friend” to the slinky, Noir Blues of “Metrophobia,” the band is just en fuego. “Being” expands their sonic soundscapes with the spirally acoustic bliss of “Born Trying,” the Bagpipe-y goodness of “Progress” and the cool-cat swagger of “Wilderness.” (A personal favorite of a certain Bitch Goddess who still has a “Being” t-shirt).

“THE COLOR OF APPLES” (1995) A hard left turn for the newly minted four-piece, which included guitarist Eric Overton and drummer #3, George Rubalcava. The five songs here were inspired by the free-form Jazz pioneered by Albert Ayler and Ornette Coleman. The title track is the stand-out, featuring locomotive rhythms and Squonky guitars. To quote the late Phil Liebert, who penned the Lester Bangs-ian liner notes, “this difficult music is quite rewarding.”

“CHORDATA” (2006) Although it had been 11 years since the last Dali’s Llama effort, Zach and Erica had remained busy raising their sons, Sage and Zane and channeling their energies into side projects like Zach’s Primordial Blues band and three solo albums. DL’s newest line-up added some extra distaff energy with the addition of drummer Robin Clewell. It also introduced the world to the wunderkind talents of guitarist Josh Roell. Roiling bass, crusty guitars and a bludgeoning beat power “She’s So Strong.” If Chuck Berry, Black Sabbath and AC/DC had ever joined forces they might have come up with the song “Mongrel.” Then there’s face-melting guitar on “Zulu,” the sly ‘70s boogie of “Sanctuary” and gnarled bluster of “Old Dog.”

“SWEET SLUDGE” (2007) Sure, the title of Dali’s sixth opus seems like it references the viscous ooze of down-tuned guitar that permeates the album. In reality it’s an homage to Zach’s addiction to fancy, (corporate) coffee. Back to a three-piece, this album finds Zach, Erica and Robin ragin’ full-on. A highlight here is the cosmic caterwaul of “Micro Giant.”

“FULL ON DUNES” (2008) This album ushers in the era of drummer #5, Jeff Howe. It was recorded at Scott Reeder’s Sanctuary studio during a particularly tumultuous time for Erica and Zach. It features cameos from (in)famous friends like Mario Lalli, Sean Wheeler and Joe Dillon. There is a thick, heaviosity to this album, exemplified by the dust encrusted maelstrom of “Desert Dogs” and the deciduous plumes of “Smoke Tree.” The song “Full On” shares some musical DNA with Argent’s ‘70s Proto-Grunge/Prog hit, “Hold Your Head Up,” and “Full On” zig-zags through a sonic swamp.

“RAW IS REAL” (2009) With the addition of guitarist Joe Dillon, DL is back to being a four-piece. “Raw…” is a visceral reaction to the wrenching health crisis that Erica and Zach experienced the year before. Stinging bass lines connect with battering-ram beats and the guitars are equal parts sluggish and pugnacious. Highlights include the sandblasted gaze of “Eve’s Navel” and crepuscular feedback of “Blackout.”

“HOWL DO YOU” (2010) First and foremost this album introduces the protean talents of drummer #7, Craig Brown. For those keeping track, #6, Trent Ramsayer, came and went with little fanfare. Perhaps, “Spinal Tap” style he “left a little green globule on his drum seat,” the answer is lost to the mists of time. (Actually, he might be in Orange County, meanwhile, Ramseyer is a great Adult film star alias… just putting that out there).

Anyhoo, “Howl…” adds some much needed levity to the DL cannon. Inspired by Garage bands like the Sonics and the Punk/Psych stylings of the Cramps, the album was produced by Desert Rock Renaissance man Mikael Jacobson, who also added some spectral organ to the proceedings. (Back in high school, Mike and Jeffrey Whipp anchored the sublimely wonderful College Rock three-piece, Doted Swiss. A musical Swiss Army Knife, he has earned his keep as a professional Musician, writing recording and teaching for over 30 years). Stand-out cuts include the carnival spook of “She’s My Halloween,” the Rockabilly frenzy of the title track and the Space-Age Psychedelia Of “Masochist.” This album is creepy, kooky and altogether ooky.

“AUTUMN WOODS” (2012) Their 10th effort returns Dali’s Llama to the Antediluvian slime. It also begins a bit of Joe Do-si-do, as Joe Dillon exits and Joe Wangler takes his place on guitar. Clocking in at an epic 10 minutes, the hypnotic title track serves as centerpiece. Other highlights include the churning “O.K. Freak Out,” the evocative Punk teen rebellion of “Nostalgia” and the post-coital exhale of “Resolve.”

“DYING IN THE SUN” (2016) Here, Dali’s Llama turns it up to 11 and it’s a regular Joe-Palooza with Wangler on guitar and Dillon on keys. The band fully stretches out, from the Sasquatch stomp of the title track, the foreboding “Samurai Eye” and the spiky sleepwalk of “Claustrophobic Blues.”

If you are still yearning for more of Zach’s musical sangfroid, further exploration should include last year’s three song EP. Also search out his two mid-‘90s albums with Primordial Blues, three solo efforts and all-star collaborations with Hot Beat Pussy Fiend, Ogressa and the Hick-Up’s.

For Friday’s show, Sean has resurrected his early ‘80s combo, Zezo Zece Zadfraq and the Dune Buggy Attack Battalion, (the name is a slippery homage to the creepy crawly Manson family). Meanwhile, Mario’s Rubber Snake Charmers features his son Dino, as well as an ever-changing line-up of Desert Rock luminaries. This Silver Jubilee extravaganza starts at 8pm and the cover charge is $5.00