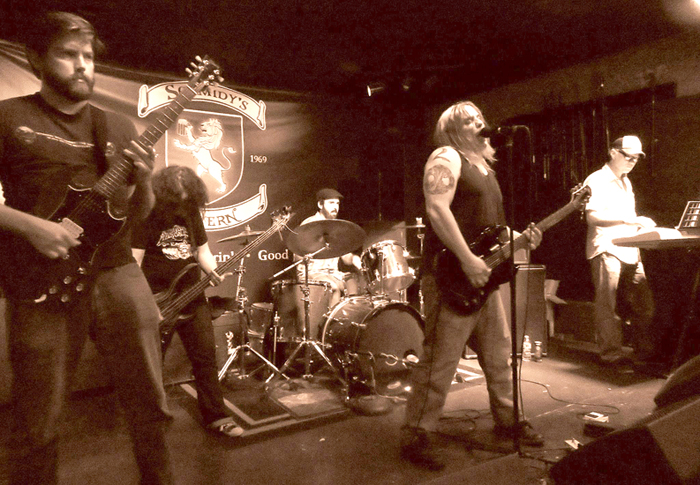 Zach Huskey has been making music for nearly 35 years. Mild-mannered librarian by day, and hirsute Rock God by night, he is a Capricorn whose interests include; bears, facial hair and bear tattoos.

He is also an original progenitor of the Desert Rock scene. Sure, other bands have achieved more notoriety, a certain popular front-man has even co-opted some of  Zach’s experiences as his own. (e.g. Iggy Pop at the Ocotillo Lodge, an adventure belongs to Zach, Iggy and Sean Wheeler).

In reality, it was Zach, along with Mario Lalli, Herb Lineau and Sean Wheeler that started it all. The nascent scene began in the early ‘80s, just as Zach hit high school age. During that time he fronted bands like the Sciotics, Blue Sunday, Cloudy Daze and The Next.  It was around this time that he and Erica Faber first got together.

Pursuing his Rock & Roll dreams, Zach relocated to Los Angeles following high school. Even at the height of the Hair Metal years he was moderately successful in bands like Long Dead & Gone, as well as My Pain.

Although the “pay to play” policies were in full swing on the Sunset Strip, Zach was actually able to navigate the system. In between performing at venerable clubs like the Roxy and the Whisky, he still managed to get back to the desert for covert generator parties the mostly remained secret, word-of-mouth events.

By the early ‘90s, both groups had run their course. Zach and Erica returned to the desert intent on creating their own band. Erica had become rather proficient on bass, and once they hooked up with drummer Johnny Moreno, Dali’s Llama became a reality.

Their first three albums, Pre-Post Now, Creative Space and Being, offered a master class in concise Power Punk.  By the time they recorded The Color Of Apples, Zach was channeling influences as disparate as Erik Satie, Neil Young and Albert Ayler.

Dali’s Llama took a hiatus in the late ‘90s as Zach’s myriad side projects took center stage; his Primordial Blues band recorded two albums. Then he revealed his more rustic side, releasing a couple of (mostly solo) acoustic efforts. Touring was limited as Zach and Erica, married since 1996, were raising their boys, Sage and Zane.

Dali’s Llama came blasting back in 2006 with their Chordata album and haven’t slowed down since. Between 2007 and 2012 they released Sweet Sludge, Full On Dunes, Raw Is Real, Howl Do You Do and Autumn Woods. 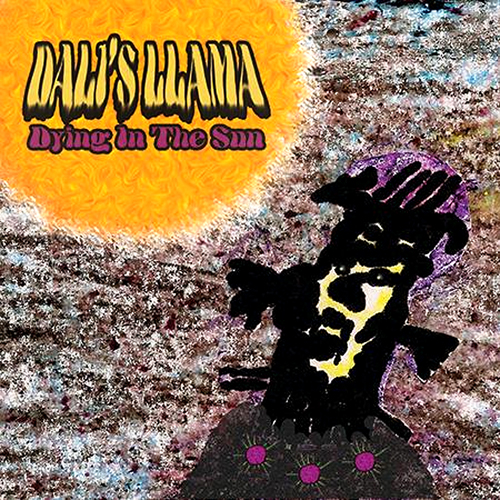 After a brief detour with the Hick-Ups, Zach’s Cowpunk side project, Dali’s Llama has returned with their 11th album, Dying In The Sun. Although the core of the band has always been Zach and Erica, the current line-up, which includes guitarist Joe JW Wangler, drummer Craig Brown and wild man Joe Dillon on keys, has been ongoing for the last few years.

The seven song set kicks into gear with the title track. Clocking in at seven minutes plus, this is a sepulchral sludge-fest of epic proportions. Tuned-down riffs stomp and pivot like a restless Sasquatch. At one with nature, and feeling his age, Zach seems ready for the long walk home. “Now that I’ve grown old, at the end of my road/I shall walk into the hills and let the desert make the kill.”

Luckily, the rest of the band has other plans, as the instrumental break kicks the song into interstellar overdrive.  A wildly accelerated tempo is matched by threading bass lines. Zach’s dusty, plodding pyrotechnics are supplanted by JW’s pin-wheeling psychedelia. Trading riffs, the pair engage in a rapid-fire free-for-all guitar duel that is positively thrilling (and not the least bit Ted Nugent-y). The track winds down with Joe Dillon’s spectral keyboard runs.

Both “Hocus Pocus” and “Bruja-Ha” concentrate on the supernatural. The former is powered by pummeling drums, bludgeoning bass lines, subtle keys and guitar riffs that shift from chunky to stentorian. The lyrics offer a sly commentary that equates organized religion with sanctimonious superstition; “Seasons of guilt, mumbo jumbo, the invisible soul.”

The latter is slightly more playful, lyrics gently mock a Goth-Girl gone wild.  Shards of guitar crash over see-saw rhythms, as Zach offers up an arch caricature; “Fake spells and fake commands, lighting candles she plays pretend.” Suddenly the guitars power down under a Witchypoo cackle and then come roaring back locking into a head-banging groove.

The album’s centerpiece is “Samurai Eyes.” Splattery cymbals wash over plucked guitar notes and teasing, tensile bass fills. All these elements feed into the sense of foreboding that pervades the track.

The lyrics sketch out a skeletal scenario worthy of a Kurosawa film. Three and a half minutes in, guitars begin to shudder and quake. Over a walloping back-beat marauding riffs and stabbing keys underscore this Bushido Code haiku. Wagnerian power chords ride rough-shod as the tune gallops to conclusion.

Other interesting tracks include the Biker dystopia of “V.O.E. ’73.” The opening notes are drenched in feedback and the tune is anchored by thudding bass, punishing rhythms, spooky keys, and Zach’s yowly, End-Times vocals.

Meanwhile, “Claustrophobic Blues” is a spiky ode to al fresco somnambulism.   The tune is accented by tilt-a-whirl riffs that ricochet through buzzing bass lines and a whip-crack beat. As guitar solos scream and caw, it’s a wonder anyone can sleep.

It’s interesting to note that for guys who grew up here, this desert landscape continues to be a source frustration and inspiration, both in equal measure. Almost anyone who left (escaped) to more temperate climes or a denser urban sprawl, can’t deny the desert in their blood.

So, it’s only fitting that the closing track is an eight minute meditation our stark environment. “Verbenia” is more suite than song, breaking into three distinct parts.  Insted of his trademark yowl/growl vocals, Zach actually sings, almost crooning through this yawning in-a-gadda-da-vida.

Initially thudding guitars and bass are in lock-step providing a metronome meter. As time signatures shift, the guitars slither through the mix. With ambient wind chime sounds, the action grinds to a halt and Zach intones a cryptic mantra: “Canyon sleeper, dream on away/Desert creepers crawl on away.” Suddenly Zach lets loose with a scorched-earth solo, JW is hot on his heels. As the kaleidoscopic freak-out subsides and the melody winds down, a hot desert wind blows through, closing out the song.

Dali’s Llama may never indulge in a “Kumbaya” sing-a-long with U2, or headline Coachella, but that’s ok. That was never the point. Dying In The Sun is a welcome addition to their consistently satisfying body of work.

Queens and Eagles may capture the headlines, but when the history of Desert Rock is written, as the sonic architect of Dali’s Llama, Zach Huskey will be truly acknowledged as a pioneer and a real frontiersman: The Teddy Roosevelt of the sludgey Desert sound.