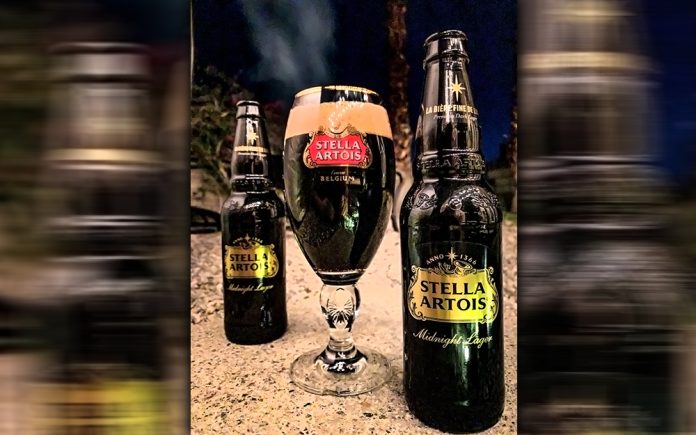 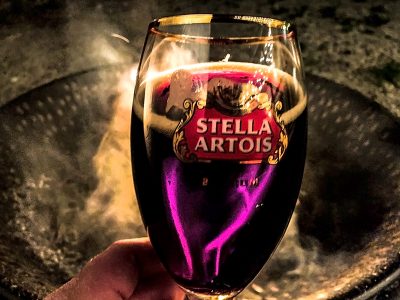 While I was busy last Halloween reviewing (and hating) Trader Joe’s (awful) pumpkin beers, the makers of Stella Artois released a limited-edition beer called Midnight Lager. Presented in a spiffy, black painted bottle with gold lettering, the Belgian-based (and now AB-InBev owned) brewery debuted their second holiday-themed release as a sister to their flagship product. It’s a little-known fact that the Brouwerij Artois first released the original Stella in 1926 as a seasonal, Christmas beer to be sold only in the winter months. Stella proved to be a big hit for the company, and by 1930 it was released and enjoyed year-round. Almost a full century later, Midnight Lager debuted at midnight on October 31, 2019, bringing dark lager beer to the casual beer drinking masses. While the style is not completely unheard of in the American macro-production market, it’s still rare enough to pique more than some curiosity.

Heineken has a dark lager that’s been around for some time now, it’s limited distribution stateside probably has much to do with its limited appeal, as the one-note caramel flavor that it carried didn’t quite catch on with the American drinking public. Ab InBev’s Saint Pauli Girl and Beck’s brands also created dark beers, all with limited production runs that are a testament to the lack of popularity that dark lagers suffer from in the U.S market. Craft Breweries have managed to release some spectacular dark lagers, many of them American interpretations of classic old-world styles, some brewed with reverence and faith to the original European recipes.

Stella’s Midnight Lager broadly defines itself as a European dark lager, which is actually broken down into two specific subcategories; the Munich Dunkel and the Schwarzbier. The classic interpretation of a Munich Dunkel is a rich, bready beer with malty sweetness, hints of chocolate and caramel, low hop bitterness, and no hop flavor. So, with that in mind, imagine the nerve of Negra Modelo to call itself a Munich Dunkel. That’s like a Honda Accord calling itself a sports car. Conversely, the Schwarzbier is a style with light to moderate malt flavor, and a bitter-chocolate note that never tastes burnt. Babe’s Brewhouse in Rancho Mirage has an excellent Schwarzbier called Blackfin lager. Full Sail Brewing’s Session Back lager is also a fantastic example; as well as Uinta’s Baba Black Lager.

So, much like with music, categorizing can be tricky when a song or beer falls into several categories with the different characteristics being displayed. Bohemia Obscura, Bohemia’s dark Mexican lager, categorizes itself as a Vienna lager, the same style of beer as Samuel Adams Boston Lager. While there are definitely similarities between the two (as in they’re both wet), the flavor of Bohemia Obscura is more in line with a Czech dark lager (If you need more proof of how breweries get their own categories wrong, Mexico’s Indio Lager also calls itself a Vienna Lager. Not to get all beer snob-hipster on everyone, but dude, no it’s not). Dark copper in color, with just a hint of roastiness, balanced malt sweetness, and more intensity than a European dark lager, this is a style that has yet to create a trend stateside.

In 2015, the BJCP Style Guidelines took the category of Dark American Lager and transmogrified it into a new category, the International Dark Lager. Why, you ask? I have no idea. Call it what you want, both categories mean the same thing, which is essentially a very simple lager that just so happens to be dark in color. Think San Miguel Dark, or the aforementioned Saint Pauli Girl Dark. This type of beer is not terribly robust, not terribly complex, not very roasty, and basically needs to just have a clean finish to end up in this category. Shiner Bock is a classic example of the International Dark Lager.

While categories are essential for judging competitions, they don’t mean much to the general consumer, and that is why major breweries rarely get caught up in the semantics of labeling their beer in exacting ways. Stella Artois Midnight Lager calls itself a European dark lager, and that’s as befitting a title as it needs. It’s a tasty one at that; a dark beer that manages to retain the characteristics that lovers of Stella’s pale lager enjoy. It might be hard to find this far after the season has passed, but it is definitely worth a purchase.