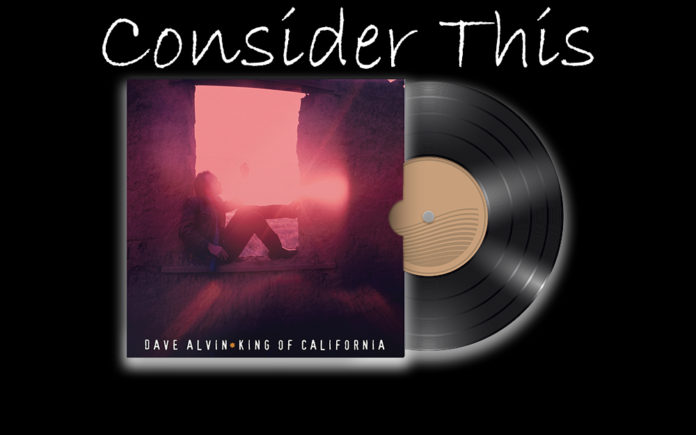 When you picture Dave Alvin as a kid (as many of us often do), is he playing with toy trucks, baseball bats and erector sets? Or is he holding a rare Skip James LP, studying the label before placing it gently on a Grundig Majestic Stereo console? It’s certain Dave and his older brother Phil made room for other interests, but it feels like music has been the primary obsession since these guys learned to talk and walk.

Dave was born in 1955 and along with Phil, grew up in Downey, California. The LA suburb is best known as a center for aerospace production, as well as nurturing the musical aspirations of the Carpenters. The Alvin Brothers’ influences were a little less clean-cut. Once an older cousin turned them on to the sounds of Blues, Folk, R&B, Country and Rockabilly, those became their touchstones.

Starting in their early teens, the brothers made weekly pilgrimages to legendary Los Angeles clubs, soaking performances from legendary Bluesmen like Lightnin’ Hopkins and the Rev. Gary Davis, and meeting personal icons like Muddy Waters and Big Joe Turner. Even though both matriculated through college and Phil began teaching mathematics, their passion for music never diminished.

In 1979 Phil and Dave recruited drummer Bill Bateman and bassist John Bazz, and formed The Blasters. The L.A. club scene had recently been reinvigorated and the Downey four-piece took full advantage. Soon they were sharing stages with bands like X, Gun Club, the Screamers and Black Flag. They pioneered a Roots Rock sound that was seasoned with an extra jolt of Punk Rock energy. Phil was a natural ‘lead’ singer, but Dave emerged as an accomplished songwriter. He created indelible songs like “Marie, Marie” “Border Radio” and “American Music,” cementing their place in Los Angeles music history.

Their 1980 debut, American Music, released on Rollin’ Rock Records, mixed favorite cover songs and a brace of cutting originals. A year later, The Blasters signed to the iconic Punk label Slash. The band recorded three long-players and one EP between 1981 and 1985 before Dave left for, not necessarily greener, but different pastures. First, he took a busman’s holiday and formed the Knitters, a Country/Folk side project that involved ¾’s of the band X: John Doe, Exene Cervenka and D.J. Bonebrake. They released the mostly acoustic Poor

Little Critter On The Road album, to rapturous reviews.

A year later, when guitarist Billy Zoom left X, Dave stepped in sharing duties with Tony Gilkyson for X’s sixth record, the somber See How We Are. Not long after, he embarked on a solo career. His debut, Romeo’s Escape, was released through Epic, ( the division of Columbia Records responsible for Michael Jackson and Europe) in 1987. But they had trouble marketing the record, actually instructing stores to file it under Country. It got kind of lost in the shuffle, but Dave got his groove back when he signed with Hightone Records.

The Oakland-based independent was formed in the mid ‘80s and concentrated on releasing American Roots music. Dave recorded Blue Blvd and Museum Of Heart in quick succession but it was his 1994 King Of California album that proved to be his watershed record. Interstate City and Blackjack David arrived at two-year intervals and at the dawn of the 21st century, he recorded Public Domain. As his dad was losing his battle with a terminal illness, Dave would clear his mind by hiking and singing old Folk favorites. That became the impetus for the record, which won a Grammy for Best Traditional Folk Album.

In the nearly 20 years since, Dave has continued to release albums at a steady clip. Jumping to the Yep Roc label, 2002’s live Out In California begat Outtakes In California. A stream of studio albums followed: Ashgrove in 2004, West Of The West, (covering California musicians he’d long admired), in 2006. Three years later Dave Alvin And The Guilty Women surfaced, and Eleven Eleven, his 11th solo album arrived in 2011.

He has also found time to reunite occasionally with the Blasters, as well as record two albums with his brother Phil, covering seminal Blues and Folk classics. Last year he partnered with Texas troubadour Jimmie Dale Gilmore and recorded Downey To Lubbock, a warm collection of originals and covers. Now, just in time for its 25th anniversary, Hightone and Craft Recordings have teamed up to release an expanded edition of King Of California on CD and, for the first time, vinyl.

The album opens with the expansive title track. Dusty acoustic riffs swirl around rippling mandolin notes and a mournful Weissenborn slide guitar sideswipes an urgent snare drum kick. The melody shares some musical DNA with Bob Dylan’s “Boots Of Spanish Leather,” but Dave’s lean lyrics echo the economical prose of John Steinbeck. A young man off to make his fortune in order to marry his true love, heads to the Golden State; “Over deserts hot and mountains cold, I traveled the Indian country, whispering your name under lonesome skies, remembering only my company.” Of course, it all goes awry, youthful self-assurance is met with brute force; “Now a dead man is laying at my feet, tried to steal my earnings, and I still recall your tender kiss, oh this bullet in my chest is burning/Oh my darling dear, please shed no tears, ‘cuz I think it’s fair to warn ya, that I’ll return to claim your hand as the King Of California.”

Two tracks here initially popped up on X albums. “Little Honey,” co-written with John Doe appeared on the last Billy Zoom-y X offering, “Ain’t Love Grand.” That version was a super-charged rave-up. Dave’s take is less brash, more conciliatory. The tempo slows and slippery acoustic licks sidewind around bottleneck electric guitar, fluttery organ notes, plaintive accordion and a thwacking beat. Dave doesn’t so much confront a wayward girlfriend, as try to understand her self-destructive impulses; “Little Honey, are you going out tonight, Little Honey won’t you please come over here? Little Honey, won’t you please bring me a beer/ Little Honey, I promise I won’t get mad, if you tell me about the boyfriend that you had.” The momentum gathers speed on the outro, matching Dave’s kind resolve.

“Fourth Of July,” which can be found on X’s “See How We Are” album feels more ornate and upbeat. Shimmering acoustic guitar intertwines with piquant mandolin, chunky electric guitar, lush organ colors are bookended by a tick-tock rhythm. The buoyant melody nearly camouflages the deftly turned phrases sketching out a scenario of domestic discord; “She gives me her cheek, when I want her lips, and I don’t have the strength to go, on the lost side of town, in a dark apartment we gave up trying so long ago/On the stairs I smoke a cigarette alone, Mexican kids are shooting fireworks alone, Hey Baby, it’s the fourth of July.”

Dave recalibrates several songs he originally wrote for the Blasters. “Barn Burning” dates back to their 1980 debut. The original is a rollicking, jumped-up Blues number. Here, it’s a stripped-down Blues-shuffle accented by braided acoustic guitar, prickly mandolin, smoky harmonica, walking bass lines and a ricochet rhythm. Whereas Phil’s trademark vocal stylings felt fun-loving and yodel-riffic, Dave hunkers down, coiled and reptilian. Although lyrics like “The rich get richer, the rich get richer, and the poor they just get poor….cause there’s an evil in this land” are probably 40 years old, they resonate right now. The instrumentation on the break wigs out, hitting full-fledged Hootenanny proportions.

“Border Radio,” from the Blasters’ self-titled album was a stuttery, Big Easy-style Rocker. Here, it’s recast as a pensive ballad. Originally, the lyrics felt like a tart homage to the illicit radio stations that cropped up in Mexico blasting 50,000 watts of American music back in the 1950s and ‘60s. As Spanish-flavored acoustic guitar lattices over Weissenborn slide and upright bass, Dave unspools a sad and rueful saga of a woman trying to track her wayward man via the airwaves; “She calls toll-free and requests an old song, something they used to know/She prays to herself that wherever he is, he’s listening to the Border Radio.”

Both “Bus Station” and “(I Won’t Be) Leaving” can be found on the band’s Non Fiction album. Back in the ‘80s, “Bus…” was a bit of a basher. Here, the action slows, gossamer accordion wraps around searing pedal steel over brisk percussion and willowy acoustic guitar. Front and center are Dave’s tender vocals and lyrics that chronicle A couple’s peripatetic life on the margins; “Bus Station, at sun-up, she reads the ticket in her hand, it’s a different name for the same old town and this this ain’t the life they planned/And so he tries to tell her, it won’t be like the times before, it’s a different town and a brand new start and he’s gonna work a whole lot more.”

Meanwhile, “…..Leaving” downshifts from the propulsive Stax-Volt shang-a-lang of the original to the slow-cooked Memphis Soul stew of this rendition. Dave’s pledge of romantic fealty is shadowed by sweetly spiraling electric guitar.

The album is peppered with three taut covers; a gritty account of Whistlin’ Alex Moore’s “East Texas Blues,” a gutbucket take on Memphis Slim’s “Mother Earth” and a bare-bones adaptation of Tom Russell’s “Blue Wing.” Still, the real surprises on King Of California are the two duets.

Dave partners with Rosie Flores on “Goodbye Again,” and he also teams with Syd Straw on the George Jones chestnut, “What Am I Worth.” On former, co-written with Rosie, Dave’s affection for Tex-Mex and Norteno music shines through. Sun-dappled acoustic licks wash over high-strung arpeggios and honeyed accordion are anchored by a clip-clop rhythm. The pair portray ex-lovers, locked in a romantic pas de deux. Ache mixes with regret, but they never come to terms.

This expanded edition closes out with three bonus tracks, “Riverbed Rag,” a wickedly intricate instrumental that highlights Dave and the band’s musical prowess. Dave and Katy Moffat Serve up a fairly faithful rendition of the traditional Folk favorite “The Cuckoo,” followed by a soulful interpretation of the Merle Haggard classic, “Kern River.”

As a lead singer, Dave really came into his own on this album. Much of that is due to the presence of sympathetic producer/multi-instrumentalist Greg Liesz. He corralled a who’s-who of pickers and players to bring their vision to fruition. The line-up included James Intveld, Bob Glaub, Alan Deremo and Don Falzone on bass, Bobby Lloyd Hicks, James Cruce and Donald Lindley on drums. Jimmie Woods played harmonica, Skip Edwards tackled accordion and organ, Steve Van Gelder handled fiddle and David Jackson also played accordion. Greg Liesz played mandolin, Weissenborn slide, high strung and pedal steel. He and Dave switched between electric and acoustic guitar.

If you’re unfamiliar with Dave Alvin, this album serves as both a gateway drug and a crash course. If you’ve followed him forever, it’s a potent reminder of his rough-hewn grace. Either way, there’s no debating it, he’s earned the crown, he’s the King Of California.