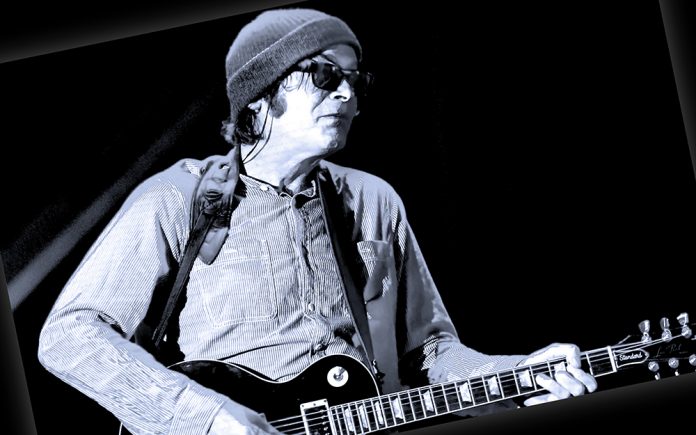 David Roback died on February 24th at the age of 61, the cause was metastatic cancer. Most people know him from his most recent band, Mazzy Star, but for me it was his earliest bands, The Rain Parade, and Opal, that made the deepest impressions.

David was born in April, 1958 and grew up in Los Angeles. His father George was a physician, and his mother, Rosemary, was a nurse. David and his brother, Steven, attended Palisades High and formed their first nascent band, nconscious, with Susanna Hoffs, who went on to front the wildly successful ‘80s band, The Bangles.

He briefly attended UC Berkeley before transferring to Carlton College, a Liberal Arts school in Minnesota. It was there that David and his roommate Matt Piucci completely immersed themselves in music. Post-matriculation, Matt followed David back to L.A. with the express intention of forming a band. Initially, they were the Sidewalks, but once they added Steven Roback on guitar, Will Glenn on keys and drummer Eddie Kalwa, they became The Rain Parade.

The Los Angeles music scene of the late ‘70s/early ‘80s was as sprawling as the city itself. The thriving Punk/D.I.Y. ethos allowed budding bands to follow their muse. For The Rain Parade, this meant a deep dive into the Psychedelica that first flowered in the ‘60s. Heavily influenced by bands like The Seeds, The Nazz, Chocolate Watchband, The Electric Prunes, The Count Five and The Standells, The Rain Parade used those antecedents as a template that forged their own trippy sound.

As it turned out, they weren’t alone in their obsession. The Bangles, The Dream Syndicate and The Three O’Clock were all intent on exploring the Garage, Baroque Pop and Psychedelia of the ‘60s. Three O’Clock leader Michael Quercio coined the term “Paisley Underground” as a way to categorize the loose-knit collective, that the four bands, along with Green On Red and The Long Ryders had formed.

Their debut, Emergency Third Rail Power Trip arrived in 1983 and it was a stunning synthesis of their influences. Songs like “Talking In My Sleep,” “Look At Merri,” “What’s She Done To Your Mind” and “Look Both Ways” wove a tapestry of kaleidoscopic musical colors. Although The Three O’Clock is considered the archetypal standard bearer of the Paisley Underground sound, for me, nothing can touch The Rain Parade’s first record.

Despite critical acclaim and an ardent fan base, David exited the band not long after Emergency… was released. Perhaps with three strong songwriters on deck, he was feeling crowded out. He quickly moved on to his next musical enterprise, “Rainy Day.” The project seemed to come about organically, during the earliest days, the Paisley Underground bands would have weekly barbeques hosted by the Green On Red guys. Food would be consumed, alcohol and other substances were imbibed and pretty quickly, guitars came out. The assemblage would work through their favorite ‘60s songs, mixing and matching band members in different combinations and configurations.

David spearheaded the venture, handling production chores, playing guitar and adding lead vocals to a couple of tracks. He prevailed upon a veritable who’s who of Paisley stalwarts to join him, including Susanna Hoffs, Michael Quercio, most of The Dream Syndicate (Kendra Smith, Karl Precoda and Dennis Duck), as well as Bangle Vicki Peterson, Rain Parade(r)s Will Glenn, Matt Piucci and Steven Roback, and ex-Blue Cheer musician/producer Ethan James.

The nine tracks on their one-and-only LP included ethereal takes on Bob Dylan’s “I’ll Keep It With Mine” and the Velvet Underground’s “I’ll Be Your Mirror,” with Susannah Hoffs front and center. Michael Quercio takes the lead on Folk favorites like “John Riley” and “Sloop John B.,” (the latter by way of the Beach Boys iconic version). Kendra Smith checks in with a harrowing version of Big Star’s bleak “Holocaust.” Meanwhile, her mien is sunnier on Buffalo Springfield’s “Flying On The Ground Is Wrong.” David’s lead vocals are in the spotlight for the Who’s epochal “Soon Be Home” and another Neil Young/Buffalo Springfield gem, “On The Way Home.” Closing the album, all the voices converge (although Michael’s slightly out in front), for a shambolic rendition Jimi Hendrix’s “Rainy Day, Dream Away.”

Before the lacquer was dry on the vinyl, David moved on once again. “Rainy Day” was showered with critical hosannas but David and Kendra Smith (who had recently peeled off from The Dream Syndicate), along with drummer Keith Mitchell, formed Clay Allison. The moniker quickly switched to Opal, a sideways homage to Pink Floyd founder Syd Barrett’s solo song, “Opel.” They released a couple of EPs, which were later issued as “Early Recordings” in 1989, but their proper long-player, Happy Nightmare Baby was released two years early.

Sinewy, sultry and sepulchral, Opal’s music was pretty close to perfect. Kendra’s vocals shapeshifted from phlegmatic to keening sometimes in the middle of a phrase. The music and instrumentation were equal parts haunting and dreamy, adding tribal and modal accents. For many, it served as a soundtrack for late Saturday nights and, to paraphrase Kris Kristofferson, some Sunday mornings coming down.

This time, before David could cut and run, Kendra beat him to the punch. She actually quit the band in the middle of a U.K. tour, onstage, during a gig at the Hammersmith Odeon. Hope Sandoval took over vocal duties for the remainder of the tour. A Los Angeles native, Hope had formed the duo Going Home with Sylvia Gomez. When she sent a demo to David, he offered to play guitar on their album (which has yet to see the light of day). By the end of the tour Hope and David began writing music together. Out of the ashes of Opal rose Mazzy Star.

She Hangs Brightly, Mazzy’s inaugural effort, arrived in the summer of 1990. It was a cutting distillation of all that had come before. Swirly psychedelia plus a soupcon of the decadent ennui that echoed progenitors like the Velvet Underground. Hope’s laconic vocals were beautifully complicated by David’s minimal backing vocals and reverb-drenched guitars. Once again, the Rock cognoscenti were quick to champion David’s latest vehicle, but the general public was slow to catch on.

That changed when Mazzy Star signed with Capitol Records. Their sophomore effort, So Tonight That I Might See was released in late 1993 and actually generated a bona fide hit. The hypnotic “Fade Into You” immediately went into heavy rotation on MTV and propelled the band into the Top 40. In the ensuing years, the song has become ubiquitous, scoring pivotal scenes on everything from “Felicity,” “Roswell, New Mexico” and “Gilmore Girls” to “C.S.I.” and “Desperate Housewives.” But that doesn’t diminish it’s mesmerizing grandeur.

Mazzy Star’s third album, Among My Swan appeared in late 1996, stalling at #68 on the Billboard Top 200 chart. Their trademark sound still matched hypnotic vocals to jigsaw-intricate instrumentation, but in the late ‘90s, Grunge had plateaued and testosterone-y Rap-Rock like Korn and Limp Bizkit were on the ascendency. Plus Boy Bands, who among us can forget them subtlety was on the wane. Without any official word, Mazzy Star quietly slipped away.

Both David and Hope had an aversion to publicity, so there was never a definitive break-up announcement from Mazzy Star. For the next 15 years David Roback stayed busy composing film scores. Hope had begun splitting her time between California and Ireland. A side project, Hope Sandoval And The Warm Inventions, recorded two albums, Bavarian Fruit Bread and Through The Devil Softly, released in 2001 and 2009.

As quietly as they had disappeared, Mazzy Star reappeared in 2011. With minimal fanfare, they released a two-sided single, “Common Burn” b/w “Lay Myself Down.” Taste-making L.A. radio station, KCRW played it on the reg. It seems David and Hope had never stopped collaborating, continuing to write and record, they just didn’t release any of that music commercially. Two years later, their fourth official long-player, Seasons Of Your Day was released. A North American tour followed.

Critical praise was unanimous; the album jumped to #24 on the U.K. charts and entered three of Billboard’s charts, Independent Albums, Top Alternative Albums and Top Rock Albums, hitting #5, #8 and #13. The album was by turns dusty and desolate, lush and ornate, incandescent and intoxicating. Shimmery hints of bottleneck Blues, Country, Spaghetti Western and blithely Baroque accents folded into their trademark sound. Mordant and melancholy and oh-so seductive, the record left fans breathless.

In 2018, Mazzy Star issued Still, a 4-song EP featuring old and new recordings. It was released following the deaths of original Mazzy drummer, Keith Mitchell, as well as their longtime stage manager, Tom Cashen. The effort was dedicated to both of them. Now David is gone too.

David Roback consistently eschewed the spotlight preferring to spend most of his time living quietly in Norway. He remained nonplussed by contemporary music. Back in the early ‘90s, as Mazzy Star was ascending, he stubbornly insisted “I prefer the Rip Van Winkle approach to art.”

I grew up loving singer-songwriters until my difficult teenage years, when I pledged my allegiance to Punk. As my 20s dawned, I knew I needed to find something slightly harder but more melodic to bridge the gap between Joni Mitchell and Exene Cervenka.

My cousin Cally’s husband made me a cassette that featured deep cuts by Spirit, Procol Harum, Jimi Hendrix, the Kinks and more obscure stuff like “Concrete And Clay” by Unit 4 + 2. Not long after Phil Liebert blew my mind with a mix tape called “Acid Rain From Paisley Skies.” (I still have it, I also have six tape players in the house in non-working order). It was the motherload of ‘60s Psychedelia. That tape sent me on a vision quest to find a music wholly my own, which is how I discovered the Paisley Underground groups. Rain Parade led to Opal and Mazzy and everything between.

David Roback is gone, but his musical legacy is the gift that keeps on giving. Word on the street (okay, the internet), is that the rerelease of long out-of-print Opal albums is imminent. That provides some consolation, but today, I grieve the loss of an epic talent.