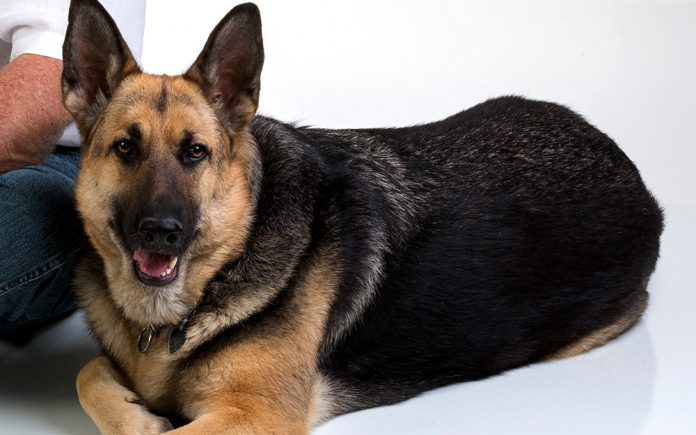 Let’s help beautiful Sunshine find a second “second chance” home!  This amazing dog has triumphed over the worst of circumstances, but sadly her human now has serious medical problems and can no longer care for his dogs.  Rod reports this magnificent German Shepherd brings sunshine into his life every day.  Here is her story.

In 2014, local dog rescuer Kim Hardee found a 4-month-old German Shepherd puppy wandering the streets of Thousand Palms. She was in horrific medical condition. Kim contacted Rod about fostering the pup.  Rod recalls, “I told Kim I was going out of town, but when I set eyes on the puppy it broke my heart.  She had almost no hair on her body due to an extreme case of mange, and her skin was covered with oozing sores from this infestation.”

“We took the puppy to Country Club Animal Clinic where Dr. Lillian Roberts and her knowledgeable staff became Sunshine’s veterinary term.  I cancelled my plans to leave town, and for the next couple months, I took the dog to Dr. Roberts for observation, medication, and special medicinal shampoo.  Eventually the mange was cured.  However, I soon noted that Sunshine could not hear well.  Dr. Roberts brought in a hearing specialist to evaluate Sunshine, and we learned she has a 90% hearing loss.”

Dr. Roberts recalls, “Sunshine had one of the worst cases of Demodectic Mange I’ve ever seen.  This condition can be hard to control, and the secondary infections really complicate things.  I presume her deafness could be related to a congenital malformation of the ear that we can’t see, but I don’t have any way to know for sure.”

No one was surprised when Rod fell in love with Sunshine and adopted her.  She appears to still have some residual hearing, jumping to alert and barking as soon as Rod’s truck approaches his driveway.  She always responds when he claps his hands to get her attention.  Rod tells us more about how he communicates with his dog.  “I developed some hand signals to communicate with Sunshine.  When she barks thinking an unknown intruder might be approaching our property, she recognizes a particular hand signal from me letting her know all is okay and she is a ‘good dog’.  She is extremely intelligent, and is presently working with a library of about a dozen hand signals.  Sunshine would go everyone with me, including when I used to work.”  If Sunshine gets a few steps ahead of him, she responds to the hand clapping, stops, and looks for instructions.

Dogs with hearing impairments like Sunshine get along better in the world than one might think.  Dogs view the world differently than humans, and communicate with their environment in the following order, (1) smelling, (2) seeing, and (3) hearing.  In humans this order is reversed.  Once a dog loses some hearing, his ability to see and smell becomes more enhanced.  Dogs physical senses are far greater than those of humans. Some deaf dogs have learned many dozens of commands through American Sign Language.

A hearing impaired dog, or any other animal with a disability, should never be pitied.  Dogs don’t dwell on what they don’t have.  They live in the moment, joyfully greet each day, and focus on what is happening in their world.  Dogs have an extra sense that humans often lack, the ability to read people’s energy and emotions.  Sunshine instinctively senses that Rod is not feeling well.

Sunshine loves other dogs.  She looks to her sister Pit Bull, Magdelina “Maggie” for companionship. (Rod rescued Maggie from a beach in Mexico.)  Sunshine cuddles with Rod’s cat, she happily greets the neighborhood children, and she “talks” to the local seniors.

Sunshine is in excellent health….active, but with a sense of middle age calmness.  She is spayed and vaccinated.  I met Sunshine and experienced her wonderful personality and lovely spirit. Sunshine hopes for a loving home where she enjoys the company of her family indoors and has a backyard for fun and exercise.  Email me at janetmcafee8@gmail.com or call (760) 219-7002, $100 donation to animal rescue group.  Sunshine hears with her heart, and whoever adopts her will be blessed.