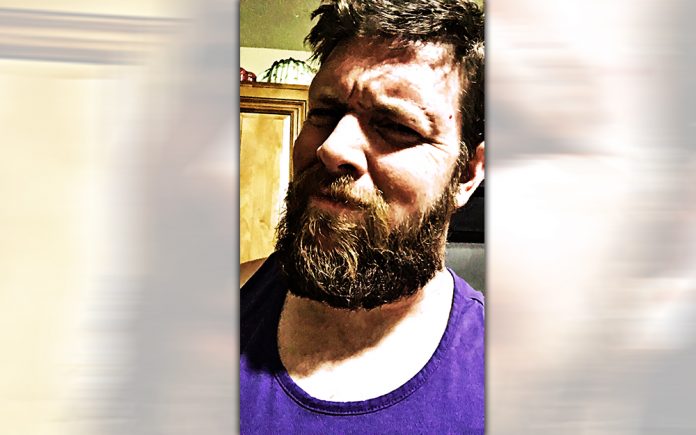 When asked about noteworthy bass players from the Coachella Valley, I think about musicians like Nick Oliveri, Scott Reeder and Armando Flores. Or I may consider Dan Dillinger, Serene Noell or Jeremy Parsons. There really is a plethora of pickers and pluckers to choose from. However, the utmost unsung bass player is Derek Wade Timmons or DWT.

Who was the bass player called upon to perform in an all-star band with artists like Lisa Lynn Morgan, Tom Edwards, Jeff Bowman, Michael Keeth, Vinny Berry and Nick Hales to pay tribute to Paul Rodgers with the Icon Award at the 2019 Coachella Valley Music Awards? DWT

Who was the bass player to make the three-piece desert rock band Sleazy Cortez a household name in the Southern California? DWT

Who was the bass player who can stand and deliver next to arguably the best guitarist and drummer combo in Arthur Seay and Mike Cancino to ever hail from the desert? DWT 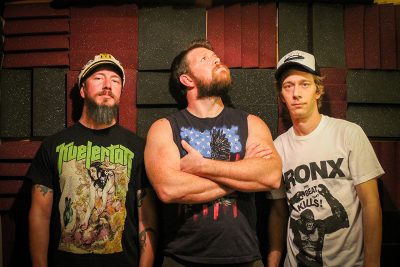 Who’s the bass player to step into the already well-established Punk/Metal force Throw the Goat with Brian Puke Parnell and Troy Anthony Whitford and help the band not only maintain their trajectory but become even more fortuitous? DWT

You kind of see where this is headed. DWT is among a unique breed of bass players who do their job when summoned, do it well and go almost unnoticed because they, along with the drummer, produce the foundation for which all the discernible riffs are laid. It’s time for us to give reverence where it is due.

Coachella Valley Weekly spoke with DWT with some trepidation. The man has a way of being serious about having fun so there is a deceptive aloofness to him that will T-bone you into a spin of sober-mindedness and objectivity when you speak with him about any topic. Below is our quick convo.

CVW: You are very prolific on the bass. Why the bass? Why not timpani or pan flute? 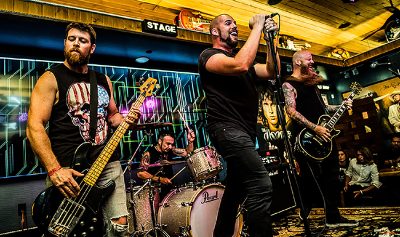 DWT: “I know the sheer animal magnetism of the pan flute could have gotten me a lot of luck with the ladies, but I had to keep my lips available for smoking and drinking, as for the timpani, that’s just too much tuning.

I was happy playing Misfits and Metallica on guitar all day until I really started listening to Primus. Who wouldn’t switch to bass after that?”

CVW: Understood. With all the bands you’ve played in, what do you take away from the totality of your music career thus far? 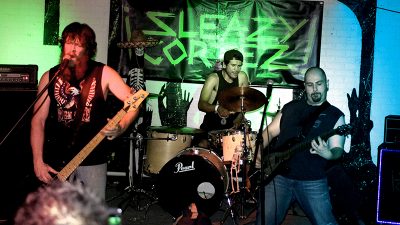 DWT: “I could have worked harder to have my music reach more ears and I still regret every song or supposed EP or band that never came to fruition, but there are way more that have happened that I’m really happy with, and I’ve made so many friends and met so many cool people because of it. Also looking forward to accomplishing some things both in the near and distant future, hopefully making a few larger-scale dents on the music world.”

CVW: Where do you think DWT is headed?

DWT: “Well, the city said I have to get all these weeds out of my yard, so there’s that. Of course that’s apart from getting engaged to Stevie Jane Lee, the new Throw the Goat album coming out this fall, Grins and Lies going into the studio in August, and working with Nick Hales and Greg Saenz on the new Sleazy Cortez bizness. But yeah, the weeds seem to be the most urgent, according to The Law.”

Coachella Valley Weekly also communicated with some of DWT’s bandmates, his fiancé, and a few fellow “low-enders.”

“I would say what makes DWT a great bass player is his diverse taste and knowledge of music, he’s like a walking Wikipedia haha! His presence on stage makes you really bring his bass lines to your attention, where in some bands the bass can get lost under everything else. Having the honor of being in a band with him myself, I would also have to say that he has inventive bass lines, a good attitude, a general excitement to be playing music and quick fingers. I may be a bit biased but I have never worked with anyone in all the bands I have been in that is more fun to work with than Derek. He really loves what he does and it is contagious. As a front man in Sleazy Cortez he is quick-witted and funny. His lyrics really tell great colorful trashy stories that are just fun. In Grins and Lies he brings a funky element to Metal which is something I haven’t ever had in a band, it really creates something unique. I would say he is just as cool as everyone thinks he is with a little more thrown in.”

“He’s one of the most positive dudes to ever dude! A musical encyclopedia! Best coal mining bass player to walk this desert. VHS loving, record playing, B side finding teddy bear.”

“I’ve gotten to know Derek more and more over the last year since he’s been in TTG. It’s made me wonder why we weren’t better bros before now. Derek is like a 17 year-old with the stories of a 57 year-old. He has the fresh-faced exuberance of someone half his age, but he can spin a yarn about the coal mine that could lead a person to believe he’s near retirement age. His Kentuckiana-twang and sleeveless shirts, often emblazoned with bald eagles and American flags, might send a distinct ‘white trash’ vibe to some, but he’s really a big softie without an ounce of hate in his heart. The extent that he’s been able to retain so much information about music and film (plus the verbal momentum he’s able to demonstrate when sharing this information) is quite impressive. His youthful excitement over his various collections is also impressive. We’ve had some long nights, getting hammered and putting on records from his substantial library, talking about music for hours on end.

Playing and recording music with Derek is a blast. He gives a lot of attention to detail when it comes to his bass lines. We kinda speak the same language when it comes to music, even though he has a degree in it and I most certainly do not. But it’s easy to work together and that’s what counts. He’s always gung-ho and raring to go with whatever silly idea that gets thrown his way. He’s a kind hearted, down-to-earth dude who loves life and makes everyone glad to be around him.”

“Well, where to start with DWT. We’ve been friends and bandmates for about 12 years now. I think we’ve played in about 5 or 6 bands together. We’ve learned a lot from each other and share the same passion for music. He came from Indiana when I was 18 to California and landed in a house known as ‘Nottingham’ in Indio which consisted of nothing but musicians. I happened to live there. So that’s how it all got started. He joined a bunch of bands and we all swapped musicians within each other. He’s always had his own unique style on bass. Still don’t know anyone who plays like him. Overall, great fuckin’ guy and I’m lucky to know him as a dear friend of mine.”

“Props to DWT for moving down from Indiana to play in a Desert Rock band and to his brave kitty who rode all the way to California on his dashboard.”

“Derek is a great dude, a great player and wins the award for best upbeat attitude.”

“Derek is the nicest guy in the world. He’s super fun to hang out with and he’s an awesome bass player with a solid low and mean playing style.”

“Let’s see, between him and Dan Dillinger, it’s a toss up as to who is the most okayest bass player. Derek has a glorious beard, but he drinks shitty beer. However, he does wear cut-off shirts, so that’s a plus. Derek also turned downed playing with Blasting Echo, so I’m butt-hurt about that, still. He comes across as a solid individual, but that’s probably because he’s got a good woman at his side. She probably keeps him in check. If there was a Yelp rating for bass players, I’d give him 3 out of 4 bass strings. In all honesty, he’s a solid guy. There’s just a handful of people who are first-call players when somebody needs a bassist. Derek is in that group.”

“My first impression of Derek was, in one word, ‘welcoming’. A very witty, slick, magnetic personality. Musicianship? He’s wise and versatile. He’s talented and an innovator. When Derek is there to perform or there to check out music, it’s always a little bit better. He brings a good attitude that makes you have a good time.”

Serene Noell (The After Lashes, ORMUS)

“Derek is a top-notch bassist as well as a groovy singer. His tunes will grow a beard on anyone just listening the tunes of Sleazy Cortez.”

“Honestly, we’re not super close. All I could really say about the guy is that he’s a great bass player and has always been cool when we’ve been around each other. Never had any negativity between us. Judging by all the people around us and their views on him, he’s a pretty stand-up guy.”