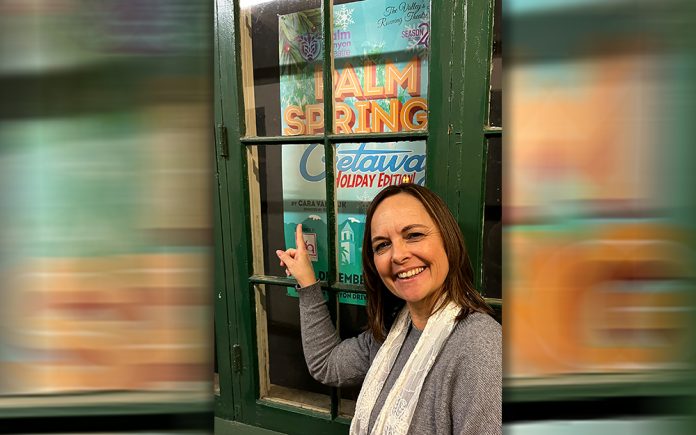 Alan Berry took the photo of Cara by the poster.

Paul Hayashi took the photos of the performance

I first met the multi-talented Cara Van Dijk in the early 2000s when she was producing KESQ’S Eye on the Desert.  It was one of those situations where there was an instant connection and friendship.

Cara, who majored in television journalism and minored in theater, was approached by the co-artistic director of The Palm Canyon Theatre, Se Layne, to write an historical musical book about Palm Springs. 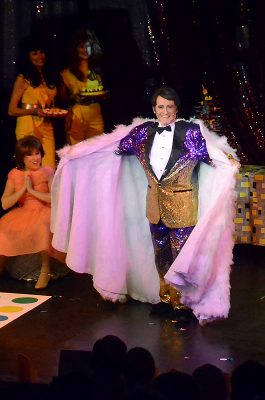 So, on President’s Day in 2020, Cara sent her family off and locked herself in her house for three days to see how far she would get with the writing project.  Shortly into her writing, Cara showed the beginning of the script to Se.  Se was thrilled with what she read she offered to bring Cara anything foodstuff to keep her going.   Cara said the only nourishment that would keep her going late into the night would be Good and Plenty candy.  Se brought her ten boxes.

The musical begins in Hollywood in the 1930s, where the protagonists realize they need a “getaway” as they try to escape mobsters set on revenge. Prompted by a mysterious fortune teller, who describes Palm Springs as the Playground of the Stars, “Bob” and “Bing” set off on a time-jumping adventure reminiscent of the lighthearted, screwball comedy films of the 1930s and 40s.

The fast-paced farce is filled with physical comedy and campy energy with bits of Palm Springs history and lore sprinkled throughout. Distinct music of each decade, performed by a four-piece band, and era-specific dance styles, plus historic projections, usher audiences down memory lane. A company of 35 local talents, ranging in age from seven to 80+, transform from one iconic character to the next showcasing not only decades past, but the magic that remains in Palm Springs today. 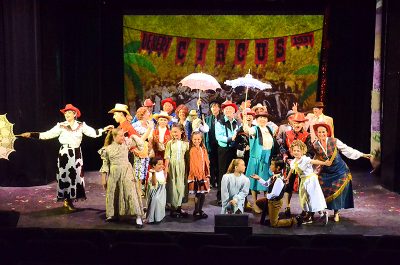 “I hope people enjoy the production for the entertainment value,” said Cara, “but I also hope it will give people – visitors and locals – an opportunity to find a new appreciation for the past that has evolved Palm Springs into what it is today. For a small community, Palm Springs may have one of the most colorful histories in our country. Maybe the show will inspire people to learn more about the city’s history. It’s a fun, parodic piece. Characters break the fourth wall, there’s time travel, fortune telling, a lot of crazy stuff – so I hope audiences just let their minds escape into the wonderful world of musical theatre. The production of Palm Springs Getaway is a work of historical fiction. While the adventures of Harry, Junior, and Mary are a figment of the author’s imagination, the show follows a general timeline of the evolution of the City of Palm Springs. Actual names or likenesses of any persons (living or deceased) and dialogue spoken by those individuals are presented in a fictitious, respectful, and parodic manner. In addition, audiences should rest assured there have been no documented incidents of time travel phenomena in the Palm Canyon Theatre or the Coachella Valley at large.”