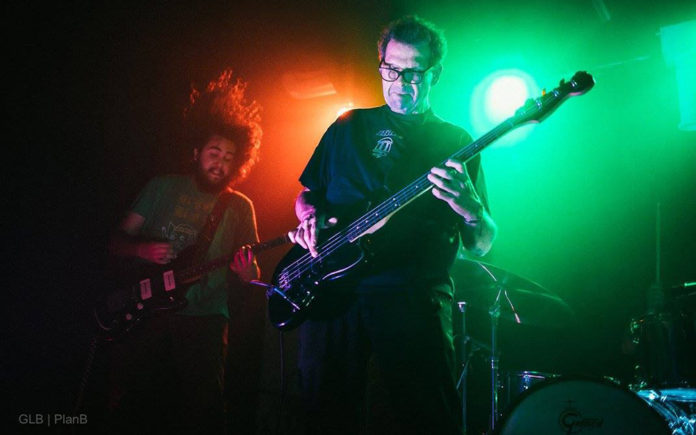 Mario “Boomer” Lalli is often referred to as “The Godfather of desert rock.”  This is not an unfounded claim.  Boomer has been a part of the desert rock scene since before it was “stoner.”  He was a part of the early punk scene which started putting our valley on the musical map.  Boomer grew up with punk legends Sean Wheeler, Herb Lienau, Alfredo Hernandez, Scott Reeder, Brian Maloney, Tony Brown, Dan Latham, and Zach Husky.  He would also go on to form bands with many of these guys.  Punk rock was just the beginning of a storied career.

In the mid 80’s, Boomer would form what is arguably considered the first “stoner rock” band, Across The River.  Across The River featured Boomer, Scott Reeder, Alfredo Hernandez, and Mark Anderson.  This band was amazing, but very short lived.  If Across The River wasn’t the first “stoner rock” band, Yawning Man surely was.  Yawning Man was more of a jam band formed by Boomer, Gary Arce, Alfredo Hernandez and Larry Lalli.  This was the band which started the legendary generator shows.  It was Boomer’s generator feeding the unreliable power to the gear at the early generator parties.

Boomer was a huge influence on the next generation of musician’s who would go on to be legends in their own right.  This younger group included musicians such as John Garcia, Nick Oliveri, Josh Homme, Brant Bjork, Tony Tornay, Mike Pygmie, Billy Cordell, Chris Cockrell, Nick Nava, Mike Moracha, and Vic Du Monte.  He would even go on to form a band with one of these guys.  Boomer, his cousin Larry Lalli, and Tony Tornay would form Fatso Jetson.  Brant Bjork even joined Fatso Jetson for a bit.  Fatso Jetson would go on to inspire many “stoner” bands, and is still active.

Boomer is a multi-instrumentalist.  His guitar tones are known the world over.  His bass groves are replicated by many.  His voice is distinct and is easily recognizable.  Boomer has been going strong for almost 40 years, and has no plans to stop.  Yawning Man is still recording and regularly touring.  Fatso Jetson put out a new album recently and still tour occasionally.  He keeps busy with every aspect of music.  From playing, to singing, to producing merchandise, Boomer is a master.  He is a true desert legend.

Coachella Valley Weekly:  Can you tell us a bit about the formation of Yawning Man?

Mario “ Boomer” Lalli:  “Basically back in about 1986, Gary (Arce), Alfredo (Hernandez), my cousin Larry (Lalli), and myself all lived together in a house in La Quinta that I had bought for us all to be together and hang out and play music.  We all just loved to jam and had jam sessions in the garage every day.  Basically there was no real intent to start a band specifically, we just were jamming making music in the garage and out in the desert because that’s what we loved to do.  That’s basically how the band started out.  We had no plans of gigs or records, just playing for the enjoyment of making music.”

CVW:  Fatso Jetson has also been around for 20 years. How did that band start?

Boomer:  “Kind of the same way; Tony Tornay used to hang out pretty much every day at my club in Indio called Rhythm & Brews.  He and Larry – my cousin and partner in the club – just started jamming after hours… making noise.  It started to take shape, but again it was just jamming and having fun… no real plan.  Obviously, that changed.”

CVW:  Both Yawning Man and Fatso Jetson are still active. How do you keep these bands relevant?

Boomer:  “We all love music.  We all thrive on creating and exploring.  Honestly, I’m not concerned with being relevant.  We just enjoy creating.”

CVW:  What was it like to re-record “Catamaran” after 32 years and having Kyuss cover it? Has the song evolved much?

Boomer:  “It was fun.  We always wanted to record all those old tunes properly… that was a good one to start with.”

CVW:  This year you’ve finally officially released the original Yawning Man demos, Birth of Sol.  What led to this decision?

Boomer:  “We have had the idea for years to make a tangible release of that stuff.  We thought with releasing a new album this would be a cool time to do it and tour with it.”

CVW:  You’ve recruited Greg Saenz as your live drummer. With Greg’s punk rock background, did it change the dynamic of the live sound?

Boomer:  “Greg’s truly a great diverse musician.  We had an amazing chemistry almost immediately.  We wrote four new songs during this tour just born of improvisations at sound check and jams mid set.  He has a straight forward consistent approach with a tuned ear for dynamics in the changes and peaks and flows in the jams.  We were really happy with our live performances.  We’re extremely grateful to play with him.”

CVW:  What’s next for you?  Any new projects? 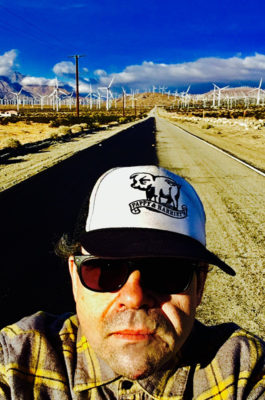 Boomer:  “I’m touring the States and Australia with Yawning Man and recording these new ideas as soon as possible.  The new Yawning Man album, The Revolt Against Tired Noises is out on Heavy Psych Sounds, and as you mentioned, Birth of Sol is out on vinyl as a joint release with Cobraside, Ruined Vibes, and Plastic Cactus.  Birth of Sol is also available as a double cassette on Solid 7 Records.””

CVW:  You’re at least a second generation musician. Your son Dino is also a fantastic musician. There was a project with you, Dino, and Benny Macias. It’s essentially you plus BigPig. Does that project have a future?

Boomer:  “Well I hope to release the recording we did at some point. The band was called Automodown.  It’s an intense crazy instrumental trio.  I loved it … those kids are amazing together.”