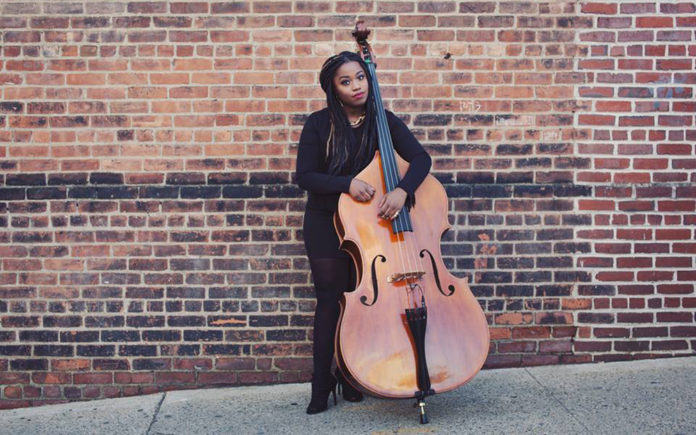 Every now and then, you run across a person with the raw musical talent and personal determination to overcome obstacles that overwhelm most.  Often discouraged but never defeated, Selah Poitier is one of those people.

“My hope is to bring about effective change in my society.  I want to enlighten…promote self-awareness…while lifting the spirits of people though my music,” says Poitier.

This singer/songwriter who plays the upright bass is reminiscent of a young Diana Krall or Esperanza Spalding. While talent alone never determines the fate of a musician’s career, her personal drive and ability to weather obstacles and disappointments that would crush the spirit of others seem to be what give her a better chance that many others to achieve her hopes and aspirations.

With her upcoming performance with a nine-piece ensemble at the JTMF, we get a chance to hear Poitier at the beginning of her wild adventure in music.

Selah Poitier’s story is of a passionate teenager living in the Bahamas. Her family included a number of talented artists.  They were also quite religious and “rigid in their beliefs” attempting to force their ways on her.  Being “naturally free-spirited” she did not want to follow “societal norms”.  Looking back on that time, Poitier says, “I like to use my music to encourage people to think for themselves and question their societal indoctrination including the society in which they were indoctrinated in.”

Looking to change her life course, Poitier set her sights on getting a college degree in music.  Her target was the heralded and much vaunted Berklee College of Music in Boston.

Poitier had a small challenge to achieving that dream.  As the single mother to a three year old while living on her own, she did not have the money to afford a plane ticket to her first admission audition with Berklee.

Two years later and on her third attempt at leaving the Bahamas, Poitier finally auditioned and was admitted with a scholarship.  Missing her son who was being looked after by her parents while she was stateside, Poitier finished the four year degree in two years despite bad technique when first arriving.  “My teacher called me ‘frog hands,’” Poitier recalls.

After graduation, Poitier got together with Berklee alums to record her original song, “I’ve Learned to Love Me.”  She recorded this after having lost her job while facing eviction from her apartment.

Facing homelessness, limited musical prospects and missing her son, Poitier thought she was destined to return to the Bahamas where prospects of a musical career were limited.

An emotional Poitier felt that her opportunity in music was slipping away.

Her mother would have none of that. “She tells me to keep on going no matter how hard it gets,” says Poitier.  Shortly thereafter, the recording which had been posted on Berklee’s YouTube Channel began to get traction.  In a relatively short period of time, views reached 100,000 and her life began to change.

She performed on the same stage as George Clinton in Everett, Massachusetts.  She was invited to perform at a prestigious event on Martha’s Vineyard on Cape Cod.  She even met one of her personal inspirations, Indie.Arie who gave her the blueprint to success.

Arie’s words echoed those of Poitier’s mother – “keep it going no matter how hard it gets.”

Poitier is doing just that.  She just finished a twelve night engagement in the Bahamas with fellow Berklee alums including some of her teachers.  Next stop: Joshua Tree.

“All of the music will be original songs and arrangements,” says Poitier.  “The set will be a gumbo of everything I’ve done on this wild journey so far.”  We can expect soul, jazz, funk, reggae, hip hop and a fusion of world sounds that Poitier has been exposed to.

After that?  Poitier is determined to move to Los Angeles to further advance her musical aspirations.