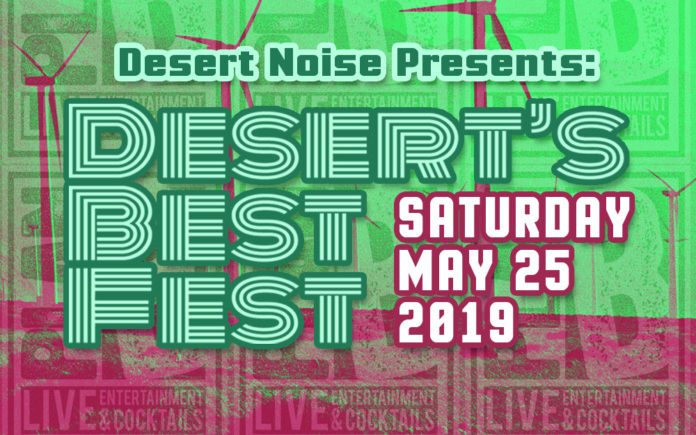 Desert’s Best Fest at Plan B Live Entertainment & Cocktails 32025 Monterey Avenue, Thousand Palms will be held on May 25, 2019 starting at 5 p.m. The event features 7 bands and 7 acoustic performers, many nominated for multiple Coachella Valley Music Awards. The show will be recorded and streamed by host and emcee Ben Crawson of ‘Live from Uncle Ben’s’ podcast. The show is 21 and over and there is a $3 entry fee after 9 p.m. There will be food for purchase as well.

Coachella Valley Weekly spoke with Desert’s Best Fest organizer Corwin Hendricks and many of the artists scheduled to perform.

The music partnership Desert Noise is the promotional arm of Hendricks’ solitary efforts. He shared about its beginnings, “I started Desert Noise almost three years ago as an effort to build a music scene at Plan B and to promote it as a venue in the desert allowing for bands to play and have shows. I do it as a volunteer to make it happen so any money we make on bar sales can go to the performers. It’s not me promoting Plan B as much as it’s the collaboration of all bands and performers involved to support each other and work together in growing our desert’s music scene.”

Initially, Hendricks did have a difficult time getting the show on the road. “At first it wasn’t easy. We made an attempt to book the first and last Thursdays of each month. I had two bands, Upper Class Poverty and Hundred Forms performing on alternate Thursdays, and we would invite another band and acoustic opener to play. During that time, I asked bands I was connected with like Right On, Right On, Sunday Funeral and The Dirty X’s to perform. We would all juggle trading shows to build interest. It was hard to get bands and people to come out to Thousand Palms on a Thursday night so we often only played for 10-15 people or just each other. After a year, a lot of new bands started popping up so I was able to have shows with a more variety of music. Attendance significantly increased. A lot of bands had their first shows at Plan B as a kind of ‘dress rehearsal’ before playing a big event, like Mega Sun did before their first CV Weekly Showcase.” Plan B has become a necessary stop for all Coachella Valley musicians. “At this point bands are asking us to play instead of me searching for someone willing to come out. Once in a while I get a weekend night when karaoke isn’t available and end up having a good night, so this time I wanted to make it a big event and celebrate the whole music scene. I tried to involve as many as I could to show the camaraderie we have and show that Plan B is a great spot for music. I wish I could have more but if it’s a success who knows what we can do in the future!”

Hendricks also has had the opportunity to connect further with his multi-talented father, Buz ‘Buz Blvd’ Keplinger. “My dad has always helped with doing sound and being an acoustic opener when we needed to fill a spot. It has been cool watching him perform and improve as well as us having something we can do together. Now we have slowly built what I hoped for, a place for bands to have a good time and bond together.”

“We are extremely excited to be playing at this show with some of the most recognized acts in the valley. It’s going to be an amazing time watching other performances, while having cocktails with our friends. It will be a night to remember. Captain Ghost is rolling on, and proud of the responses we have had from our live shows and music releases. The video for Poison Skies has been well-received and we have dropped our new single, Raise The Flag, with a video coming shortly. We feel proud to be a part of this scene and are excited for the future.”

“I am always honored to be included in events like this celebrating our vibrant and diverse music community. Thanks to Corwin for putting this together. Right now, I’m laying low, meditating, writing and recording my upcoming studio album.”

“We have to say that it’s always a real treat to take the stage among a wide array of local bands, because it really helps the audience of the Coachella Valley with having a good variety of music choice, making the events deservingly recognizable on a larger basis. More specifically, all the bands on the list have always been a real blast to perform alongside and we can’t wait to shred with them again!”

“We are excited for Desert’s Best Fest at Plan B. Corwin has put together a great line-up of diverse bands and artists. It should be a lot of fun. He’s asked us to play at Plan B before, but for one reason or another, our schedules haven’t been able to line up to do it. I’m glad it has finally worked out and we can’t wait for Saturday. Blasting Echo has been pretty busy the past few months. We’ve gotten to play a good number of shows, and meanwhile we’ve started recording our 3rd album with our good friend Rob Peterson. We’re all excited about the sounds we’re getting at his place. It will still be a while before the music sees the light of day, but we can’t wait to share it with everyone.”

“It’s wonderful to see the community come together for a pre-show to the awards ceremony with over a dozen local performers and nominees. We always look forward to playing with everyone and to see the effect of the scene work together to brand and promote feels refreshing to the venues we’ve played so often. At the moment we’re still working on our album. We’re hoping to have a lot to give to the people who’ve given the time to listen to us for so many years. Until then, you can still find us doing local shows.”

“I’m really excited about it! So many amazing talented bands! I’m just still in a transition, continuing to write and record my own music. I think it’s great that Corwin and Plan B are putting this on.”

“I’m excited and anxious! It’s our biggest event ever at Plan B! I perform there regularly and I’ll be opening the Desert’s Best Fest! Yikes! It’s gonna be a long lit night of great music and social fun for the Coachella Valley music community.”

CAKES AND THE ASSHOLES

“The boys and I plan on taking a lot of mushrooms and we are legit going to fuck that stage with our melodies. Is that too much?”

“Bottom line, I’m more than happy to be performing for this particular venue because I’m very familiar with it. It’s another one of my homes away from home. it’s a place you can always expect to run into familiar faces like everywhere else out here. And I’m excited that Desert Noise will be hosting the show at a venue that deserves the exposure. With my music, I’ve recently been writing more and trying to hit it hard, paying attention to my surroundings and thoughts and making sure I get in the habit of writing it down on anything and everything then take it home.”

“I’m really stoked for such a talented line up at Plan B. Corwin’s been booking shows on Thursdays forever there and it’s nice that we get to have a killer line up like this on a weekend. It’s a big room and deserves to be filled with people! As for my solo music goes, I’ve been really trying to get on stage more and I’m back to writing while we finish recording the Upper Class Poverty album. This is kind of my opportunity to focus on my acoustic stuff for a little while before hopping back into playing and writing for the band.”

“We are super-honored to be considered a part of the DESERT’S BEST! These bands are crazy good! We have to share our slutty guitar player with every friggen band that night so hopefully his fangers don’t fall off! Also, we are working on some new tunes and maybe will finally fill a whole 30 minute set! And we still need a band name! We’re stumped! We’ll have Carlyn Park Basore on bass, Tyler Ontiveros on drums and Nick ‘The Whore’ Hales on guitar. Carlyn’s in two bands and used to be in Hundred Forms. Tyler is in two bands and Nick is in nine ha ha!”

“We are so happy with Desert Noise booking all our shows. The upcoming show, Desert‘s Best Fest, will show once again the dedication of Desert Noise to the local music scene. Corwin and his crew always go above and beyond and run a tight show. This show is extra-special in recognizing some of the ‘desert’s best’ in some clever ways. You will have to attend to see what I’m talking about! As far as an update on the bar, I really don’t know what to say except we keep growing and new customers discover us every day. The beers are always cold and the atmosphere is fun and relaxing, especially on the patio with the misters.”