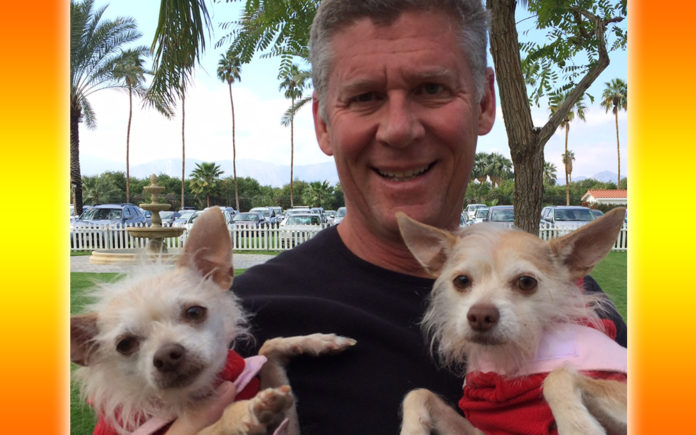 If they could talk, two precious pups, Devon and Dixie, would tell you there is a special bond between mother and daughter in the canine world. That bond has been cemented during the 3 years they have been together. They look so much alike that newcomers have a hard time telling the 10 pound dogs apart. They move as if they are one, sleep together, eat together, and happily play together. Devon and Dixie appear to be a Terrier Chihuahua blend.

Dixie’s story, as we know it, began in a housing tract under construction in Thermal. Workmen in the area spotted the tiny dog for two weeks as she darted between the buildings. She was emaciated from hunger and thirst. Her parched throat was relieved when small amounts of water trickled down the street from nearby sprinklers, but there was no food. There were no residents in the area, and the complex was surrounded by the stark desert containing coyotes and other dangerous predators.

Jim Hartman was on a job at the complex when he spotted the dog. An ardent dog lover, he tried to catch her, but she was skittish and in flight mode. Jim returned to the site the next day armed with dog food and a crate. A couple of the workers helped Jim corral the dog into a gated yard. The starving dog dashed inside the crate to eat the food, and Jim closed the door. The dog was safe.

Jim always had dogs growing up as a boy in the Coachella Valley. His first adult dog was an amazing Australian Shepherd named Blue. Blue was his best buddy who would joyfully run with Jim when he went mountain biking. His dogs were always rescues. He could not bear to think of a defenseless animal suffering from homelessness or abuse.

Jim was shocked when he saw how this dog’s bones protruded, and realized she could not have survived much longer. He bought a large burrito, and she gobbled down the entire meal in seconds. She had no collar and was not microchipped, and Jim concluded she was abandoned. Dixie started to gain weight, but it was not until six weeks later that he realized her expanding belly contained growing puppies. A week later, Jim came home from work to find Dixie snarling at his other dogs as she protected two tiny newborn pups. He found a great home for Danny, the male pup.

Jim describes Dixie and Devon who are now seeking their forever home. “Initially, they are shy when you first meet them. Once they get to know you, they are really affectionate. They snuggle under the bed covers at night, a trait that is often a Chihuahua thing. The magic words that make them go wild with happy excitement are ‘dog park’. They love to run in the park, and they are a popular pair at the Seely Dog Park in La Quinta.”

Jim explains, “I care about all dogs, but I feel a special responsibility for a dog I rescue, and I wasn’t about to risk their being euthanized at a public shelter. Dixie and Devon will make wonderful pets for a dog experienced owner. Because they love human attention, the best home would be with a retiree or someone who works at home. They are active little pups, and will entertain you with their games and antics.” Both dogs are very attached to Jim, but dogs live in the moment, and quickly transfer their love and allegiance.

Devon and Dixie faithfully attended many Loving All Animals’ adoption events only to be passed over for the “white fluffies” and more pure breed looking rescue dogs. They made sure their foster Dad understood they should remain together when they are adopted, even if that means a longer journey to find the right home. Dixie is now almost five years old, and Devon is almost three.

The happiness of two dogs who love each other (and their humans!) promises to bring great joy and love to your home. To meet Dixie and Devon, contact Loving All Animals at (760) 834-7000, www.lovingallanimals.org. Their adoption package includes obedience training classes from dog trainer extraordinaire, Tabitha Davies. Double the fun, and adopt this pair of bonded pups together.