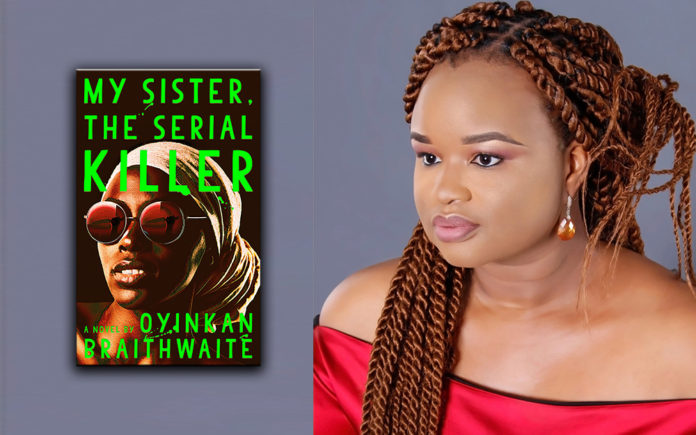 —–
My Sister, the Serial Killer
by Oyinkan Braithwaite – Fiction
—–

Siblings are not always easy to get along with and often the first-born has an added responsibility to care for and protect those younger.  In Oyinkan Braithwaite’s My Sister, the Serial Killer (Doubleday, 227 pages) sibling devotion becomes dangerous.

The story is told by Korede the eldest of two daughters in a prominent Nigerian family.  Her little sister, Ayoola is beautiful and beguiling, and also a sociopath.

For the third time, Korede, a nurse, is called by her sister to fix Ayoola’s mess – another boyfriend stabbed to death.  After they clean up the blood evidence and dump the body, Korede is pretty certain her sister is now clinically a serial killer.  Ayoola claims – once again — she stabbed the boyfriend in self-defense.

Ayoola refuses to follow Korede’s instructions to lay low and quit posting comments and selfies on social media which make Ayoola look suspicious and guilty.  Ayoola also refuses to get rid of the murder weapon — the nine-inch knife that was once their father’s.

When Ayoola meets the doctor Korede has been pining for at work, Ayoola uses her charm to reel in the good man.  Worried Ayoola will kill the only man she secretly loves, Korede tries to intervene only making herself look jealous, mean and crazy.

While dating the doctor, Ayoola has an affair with a married man who ends up dead during their tryst in Dubai.  When Korede finds out, she wonders if her sister struck again even though Ayoola insists it was from natural causes.

As the police close in on Ayoola, she charms them and lies with shocking ease.  Korede does her best to protect her sister’s horrible secret, but the situation gets way out of control and Korede herself is looking guilty.

This is author Braithwaite debut novel.  She lives in Nigeria.  With short, vibrant sentences, the reader is pulled into the world and Korede’s terrible dilemma.

Korede is a fresh and complicated character.  She is the head nurse at a private hospital — in charge and controlling.  She works hard, likes things ship-shape and abhors laziness.  She is not pretty or good with men.  Her sister is everything she is not.  Ayoola’s beauty and charm make her life easy.  Men flock to her and fall for her quickly.  To Ayoola, it’s all a game.

Ayoola is an intriguing character.  She is a predator who destroys influential men who want to possess her.

As the story unfolds, the author hints at how Ayoola was shaped into a man-killer.  Korede reveals the family dynamics and cultural eccentricities.  The father beat his daughters and allowed the pretty, innocent, fourteen-year-old Ayoola to be used sexually by an important chief to gain favor.  For Ayoola, her beauty was a curse and not a blessing.

Braithwaite is a recognized slam-poet and her prose reflect a tight, colorful, rhythmic, minimalism that moves the provocative story along quickly.  She writes with honesty and intelligence.  I appreciated the subtle cultural subtext of the story about surviving male dominance and women being mere property.

One of my favorite moments in the story is when Korede realizes the doctor she so loved and respected is not at all interested in a mutually compatible mate like she had imagined, but rather he only wants a pretty young thing at his side.  She sees the doctor as just another shallow man wanting to own a beautiful woman.

When Korede asks the doctor what he loves most about her sister Ayoola, his answers are dismissive and superficial.   I was pleasantly surprised by the genuine love Korede had for her sister as she ticked-off Ayoola’s unique and admirable gifts and talents that the doctor – and her parents did not recognize.

I wanted to know exactly what was going to happen to these complicated women, but the ending is ambiguous, which was not fully satisfying, yet is perfect for a book club discussion.

Sibling relationships are considerably nuanced and often complicated, but family is something we are born into without choice.