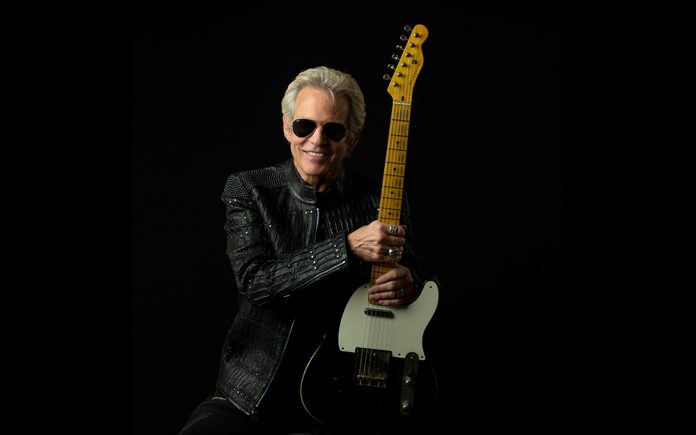 After we established our parts in a longtime bitter rivalry (as a Gainesville native, he’s a big Florida Gators fan, and as an alum, I’m a Florida State Seminoles fan), Don Felder’s fascinating stories – from childhood to the Eagles and beyond – had me hanging on his every word so much so that I almost wanted to start rooting for the Gators. Almost.

From his early days in Gainesville, FL (the genesis of our Gators/Noles conversation), Felder’s first love was music and his musical peers were the likes of Bernie Leadon, Stephen Stills, Duane Allman, and Tom Petty, the last of which he taught to play guitar. “I started playing guitar when I was 10. By the time I was 14, I had put together a little band called the Continentals with Stephen Stills. My mom used to drive Stephen and me around to women’s tea parties and we’d sit there with our acoustic guitars and play for them. Finally, when we got the bass player and drummer, we started playing frat parties.” Stills eventually moved to California, which brought the addition of Bernie Leadon to the Continentals. Felder’s repertoire of instrument mastery expanded to the slide guitar, care of Duane Allman, whose mother’s house he’d stay at in Daytona Beach. “I walked in and Duane’s sitting on the floor with a slide guitar. I had never seen anyone play it in person. Duane was on fire, so I sat down with him and he showed me how to tune the guitar. I used a Coracidin bottle and he got me started playing.” Felder worked at the famed Lipham Music Store in Gainesville, where he got a job teaching guitar lessons, as well as selling guitars on the floor. “I didn’t get paid in cash, I got store credit. I would trade in my guitar and get a better guitar. They were giving me the regular retail price not even store discount,” he chuckles. “In walks this scrawny, buck-toothed blond kid who wants guitar lessons. He has a band called The Epics and doesn’t want to play bass, so I taught him guitar.” Tom Petty – the scrawny, buck-toothed blond in the story – had an early claim to fame that he’d taken guitar lessons from Don Felder. Says Felder, “I saw when he was young, he really commanded your attention, flipping his hair, singing with a snarl. He really sold you on what he was doing. Even before he wrote songs of his own, his stage performance was astounding. I was devastated when I heard of his passing and honored for what part I played in his life.”

From Florida, Felder made his way to California, where he joined The Eagles through his connection with Bernie Leadon. At that point, The Eagles had recorded two albums with record producer Glyn Johns and were struggling creatively about the direction they wanted their next album to go. The band left Johns and hired Bill Szymczyk, trying to veer away from the country feel of their last two albums and go toward a more rock n’ roll path. Says Felder, “They were working on “Good Day in Hell” and had seen me play slide guitar. They called me up and I went into the studio. The next day, I got a call from Glenn Frey to join the band. I was working with Crosby and Nash at the time, but I told Glenn, “Absolutely.” With a pregnant wife at the time, Felder had apprehension about what he’d heard from Bernie about the drama in the band. “From that day on, it was like walking into a fight. I just wanted them to hold it together until my baby was born!” laughed Felder. Felder and his childhood friend, Bernie Leadon, only played together in the band on one album. Says Felder, “Bernie came from a country background. The first couple records have a lot of that country sound, but Don [Henley] and [Glenn] Frey wanted to make more commercially-acceptable records. Bernie became unhappy moving from country to rock and left the band.”

Speaking of country music, Felder tells me enthusiastically about his band, playing with him at Fantasy Springs Resort Casino on November 20. “I have some of the greatest musicians in that whole ‘country music side man level’. These guys are incredible!” Seth Rausch, his drummer, has played with Rascal Flatts, Sheryl Crow, Little Big Town, Brad Paisley, and Keith Urban. His keyboard player, Loren Gold, has played with Steve Winwood, Chicago, the Doobie Brothers, and currently The Who. David Myhre, his guitar player, has worked with Kid Rock, Kenny Chesney, and as the main guitar player for Tanya Tucker. “If you could imagine what that caliber band is going to sound like. Every time we play, I light up!” Felder tells me. The band plays a lot of classic Eagles songs, you know…the ones that everybody likes (which doesn’t narrow it down). A big chunk of his show includes a lot of Eagles favorites that Felder either co-wrote or played on. In addition, he plays Pride and Joy, a tribute to Stevie Ray Vaughan, a song from his last album that serves as a tribute to many cream-of-the-crop rock musicians, and more. “It’s a great show. By the end of the show, the first 10-15 rows everybody’s dancing and leaves sweaty and very happy. We have a great time. It’s all about positive energy and lighting the place up. I love electrifying people!” And the people love being electrified by him.

To end the interview, I ask Felder about being inducted into the Rock N Roll Hall of Fame (in 2016), what that recognition means to him, and what’s been the biggest joy of his career. He thinks for a second that then tells me, “If I don’t really like and enjoy something in life, I don’t do it. The thing I love most in life is playing music. I struggled through bloody fingers to be able to do that. That’s been my goal since I was 10 years old, whether it’s on a record or live. And it’s so much better live and in person. I’ve actually been inducted into the Rock N Roll Hall of Fame, the Musicians Hall of Fame, and the Florida Artists Hall of Fame. That last one was a really special honor to be inducted into my own home state’s hall of fame with the company of Ray Charles, Jimmy Buffett, Tom Petty, Ernest Hemingway and more.

To be electrified by this Hall of Fame musician, visit https://www.fantasyspringsresort.com/entertainment/ to purchase tickets to his November 20 show.