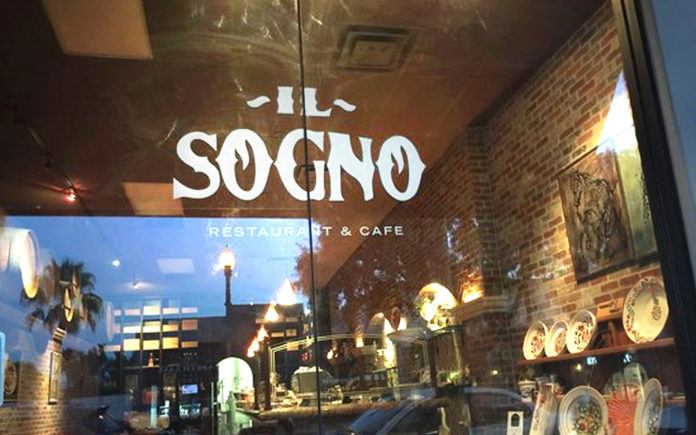 There is a scene in Willy Wonka and the Chocolate Factory that quickly came to mind when my boyfriend and I entered IL Sogno café. It is at the beginning of the movie with the scene in the candy shop, when the candy shop is overloaded with sweets to the point where the owner and the children customers are singing and dancing from pure joy. That is kind of like what IL Sogno is like, but instead of candy, imagine pastries galore, way too many to take visual inventory of. Of course, no one was singing, but I’m sure they wanted too, and after a pastry or two singing could commence just from the sugar rush alone. 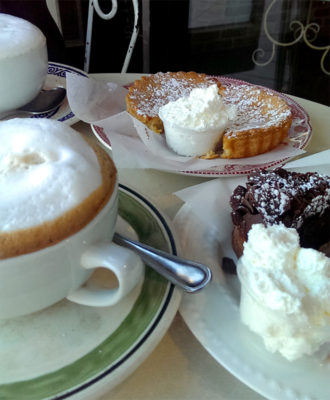 IL Sogno which means “Dream” in Italian, is a small café located on swanky El Paseo in Palm Desert. It is super adorable, charming and cozy. The quaint patio with its dainty white metal chairs and tables, allow for a whimsical place to people watch alfresco. Inside, the brick colored walls inspire a romantic mood, with intimate banquette seating. But it’s the long granite counter across from the seating area that can make your eyes pop out. It is a sweet tooth haven, or a diabetic’s nightmare. There are so many desserts displayed on the counter, it’s almost dizzying. It is natural to want to try every single one of them. Exquisitely made in house baked delights from cookies, to tarts, to flourless cakes, and those with plenty of flour sit patiently on the granite surface, waiting to be chosen, to be adopted into some ones palate, content to be devoured and never to be seen again.

My boyfriend and I didn’t set out to go to IL Sogno, but I had remembered going there years before, so when he suggested that we stop for coffee, I led him to something way better than a commercial coffee spot. After staring at the sugar fest, and before my boyfriend had a minute to choose something, I jumped in and ordered a beautifully crafted flourless ultra-chocolate cake for him and a lemon tart for myself. I guess I became sweetly possessed for a moment. My boyfriend went ahead and ordered us a couple of cappuccinos. 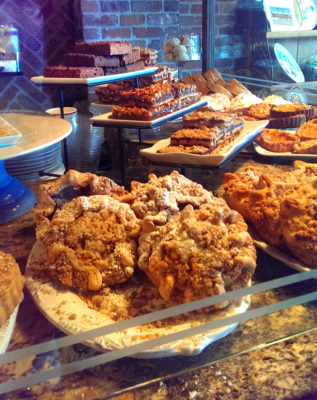 The owner Mirjama, who was tending to us, asked us to go and take a seat and that she would soon deliver our newly acquired treats to us. We took a seat outside on the patio to enjoy the shade and late afternoon breeze. Our delivery was swift, and the jovial Mirjama was as charming as the café itself, complete with a lovely Italian accent. The desserts came accompanied with a side of fresh whipped cream. There is always a distinct difference between fresh and canned whipped cream…and as a whipped cream connoisseur, it’s always refreshing to get the good stuff. The cappuccinos looked as if they had been super-sized. The extra frothy, extra-large cup had a comforting coffee aroma, a perfect accompaniment to our confections.

The Chocolate Flourless cake that my boyfriend had was deeply chocolatey, with rich flavor and density, but somehow still held on to its flourless light integrity. My Lemon Tart was served warm, heightening the lemon flavor and emphasizing the depth of the tart. Both of the desserts proved too much for us to eat at one sitting, so we took the rest to go, which made for an enjoyable treat later on that night…and some for even the next day.

After sitting for a while longer and finishing up our mega cappuccinos, we paid up and hopped back on El Paseo to hopefully walk off the some of the calories that we had just consumed.

Our time at IL Sogno was truly lovely, from the excellent desserts, to the pond sized cup of cappuccino, to the charming staff. Opened for Breakfast and Lunch, it is a real treat to stop into the café, and although they might be a bit more pricey then stopping by some of the other coffee spots on El paseo (our bill was $35), it is well worth the price. Remember, you get what you pay for.

We look forward to going to IL Sogno again in the near future, for a “Dreamy” afternoon of coffee and a sweet treats.

Opened daily from. 9am to 5pm