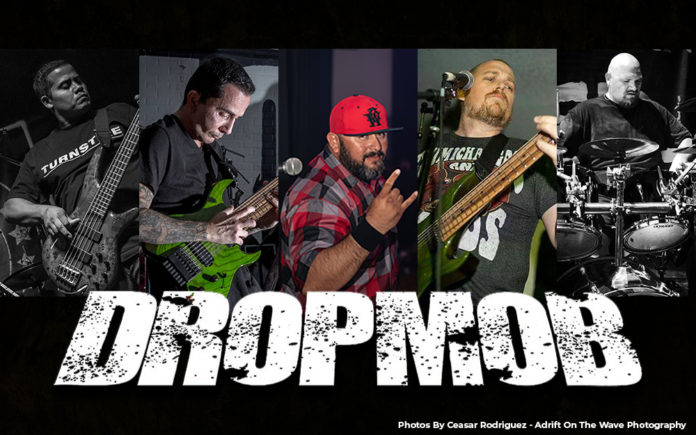 Blending Metal, Hip-Hop and Rap, Drop Mob has reloaded with former Remnants of Man drummer, Alex Milward, and will be pulling the trigger on Saturday, August 31st at The Hood Bar & Pizza at 74360 Highway 111 in Palm Desert, California with SoCal Metal artists Contortion and Melodic Death Metal maestros Call Upon Your Gods. The FREE SHOW is 21+ and starts at 9 p.m.

The collection of Gabe Perez on vocals, Dave Burk on lead guitar, Curtis Hendricks on guitar, Steven Zepeda on bass and Milward on drums are psyched-up for a break-out performance.

Coachella Valley Weekly connected with the band to give us the rundown on everything Mob related.

CVW: What has it been like for you through the process of being in Drop Mob and now that you have Alex on board?

Perez: “It has been a cool process bringing Alex in. As you know he’s a bad-ass drummer and has chops. He played with Remnants of Man, so it was an honor when he said, ‘count me in’. Now we’re creating new music and looking to record soon.”

Zepeda: “The process of being in Drop Mob has been a roller coaster that’s for sure, mentally, physically and musically, but in the end, we are there for each other. Adding Alex has been a big plus for our family, he’s a very creative drummer and is bass player approved!”

Hendricks: “We get together, we learn parts, we jam, rinse, wash, repeat. Alex brings his drumming experience and brings it hard! The guy is a monster on drums with a kind soul.”

CVW: Alex, what has it been like for you acclimating to the guys and was there any kind of Drop Mob initiation?

Milward: “The initiation was pretty easy, I asked for three songs with just guitars recorded to a click track. I was given full creative license to write whatever I wanted. I knew Drop Mob as a Nu metal band, so I kept that in mind when writing my parts. The guys liked what I was doing and liked my range of chops and ideas. Since then, the process has been completely organic.”

CVW: Alex, how is the songwriting different from past experiences?

Milward: “Typically, Dave has his ideas and riffs and we all come into practice with an open mind and just dive into putting it all together. Many times, the final product is very different from Dave’s original blueprint. We all riff off each other and put it all together over the course of a week or two. At any given time, we’re working on 3-4 song ideas; re-working and, sometimes abandoning ideas.”

CVW: There’s a lot of Hip-Hop interwoven into the Drop Mob sound. What Hip-Hop inspires you?

Perez: “Yes Hip-Rock is the real deal. We do it a little different than other bands and that’s what makes us unique. I’m ‘old school’ so Eminem, N.W.A., Rakim, LL Cool J, Busta Rhymes and so many more.”

Burk: “Good question, as you know I am a very musical person but there are raw primal elements to Hip-Hop or Rap artists like NAS, Tech N9ne and Jedi Mind Tricks that come to mind. Back in the 90’s there was obviously a huge movement with Linkin Park and Limp Bizkit but honestly I didn’t really listen to them as much I was listening to bands like Bionic Jive and Insolence who are not as popular but you can put on any song from those two bands and it’s relevant today. I Shot Lucifer by Bionic Jive is a crazy good tune.”

Milward: “I’m the youngest of four boys and my two oldest brothers listened to a lot of Hip-Hop, Wu-Tang Clan, Ice Cube, Snoop Dogg and 2PAC, The Notorious B.I.G., Warren G and Bone Thugs-N-Harmony. But, me personally, I really like NF, I’ve been listening to him as soon as I heard Mansion. I’ve always liked Eminem. I have Jhené Aiko, Lolo Zouaï, Drake, The Luniz, some Chris Brown and The Weeknd in my mix too. I really like what Blue Sky Black Death are doing. I listen to a lot of EDM/Hybrid genres that incorporate Hip-Hop beats, or Metal that adds rap, so the influence is and has always been there.”

Zepeda: “I’m versatile in music whether its Rock, Latin, Ska, Metal or Hip-Hop. I love it all, so I really don’t have a specific group that inspires me. There are a whole lot of talented musicians out there to explore that feeds my love for music.”

Hendricks: “I don’t really listen to anything new as far as Hip-Hop goes. I’m still in the 90’s to early 2000’s regarding Hip-Hop.”

CVW: Why do you feel it’s important to be from the Coachella Valley?

Perez: “We have an abundant amount of talent here from Punk like Throw the Goat, Rock like Mega Sun, Reggae like Mozaiq, Death Metal like In The Name Of The Dead, Thrash like Instigator and the Mob for our Hip-Rock. Don’t forget the Hip-Hop scene is pretty dope too with 2 Toxic and Tip Toe Stallone. There’s no community like us. If you haven’t heard us, make sure to come out and rage.”

Burk: “The Coachella Valley is my home and always will be.”

Zepeda: “I’ve lived in the Coachella Valley all my life and have experienced the generator parties to major concerts. The valley has come a long way. People I’ve talked to from L.A. think it’s a happening place and I’m like…really?”

Hendricks: “Didn’t know it’s more important to come from any specific place more than another. Although, if I wasn’t here, I wouldn’t be in the band, so…”

CVW: What are your plans for new music & performing?

Zepeda: “We have so many songs stored away and we’re just wondering whether to bring them out or scratch them, but recording will happen soon. We will also be branching out to perform in the Los Angeles and San Diego areas.”

Milward: “We’re an ambitious bunch. We’re fleshing out a sort of ‘road map’ of where we want to take this thing. New music is constantly in the works. You don’t even want to know how many songs we have in the backlog right now.”

CVW: The desert metal scene seems to be consistently temperamental. What do heavy music artists & fans need to do to better the environment and improve the outlook on desert metal’s future?

Perez: “Support local music! If we all support each other and promote each other’s shows and music and maybe bring a few people to discover new bands that would be dope. Thanks to Tracy Dietlin and Phil Lacombe at Coachella Valley Weekly for being big supporters of all genres of music.”

Zepeda: “The Metal scene is alive and well, but you don’t see a lot of venues and Metal bands in the valley. Metal bands tend to branch out to L.A. We just need support from all angles to grow.”

Milward: “Ultimately, it’s a collective; there needs to be support from all facets of the scene, businesses, bands and fans alike. In my opinion, that’s the key to keeping Metal alive. It’s a niche market here in the desert, yet, there’s a surplus. You can throw a tamale down just about any block and find a Metal band jamming! But some places don’t want to host such a rowdy bunch. And others that do may not be set up to handle live music. But we all must keep pushing! Push each other up! Attend each other’s shows! Share a beer. Share video footage. Wear a shirt, a patch, a sticker, whatever we can get our hands on! The only way the scene will not just survive but thrive is if we all help support each other.”