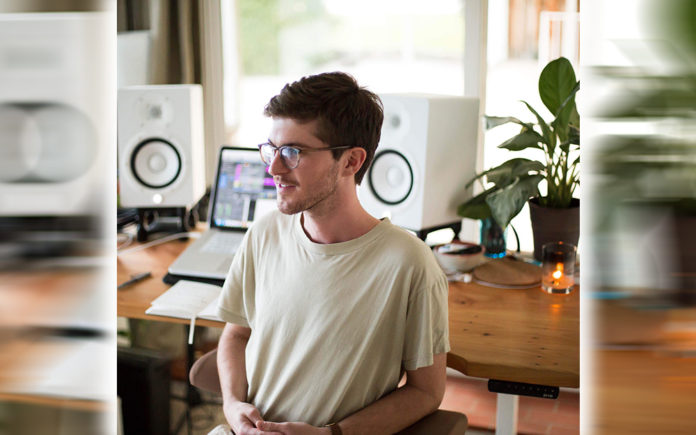 Will Sturgeon won the ‘Best Producer’ award at the 2019 Coachella Valley Music Awards for the second straight year but you wouldn’t know it by speaking to him. He is as mild-mannered as he is talented and reminds you of Clark Kent, unassuming and seemingly only attending to his duties.

Sturgeon the superhero is not incognito and does not don a cape when trouble calls. What he does do is attend to his numerous roles in the local music community faster than a speeding bullet. Those functions include running his home studio The Sturdio, leading and continuing to develop the music of 2016 Coachella artist brightener and achieving the responsibilities of Executive Director and Music Educator at the Academy of Musical Performance better known as AMP, a contemporary music education program whose goal is to enrich the lives of young musicians living in the Coachella Valley by fostering productivity and social responsibility through creativity, communication and collaboration in the development and enhancement of musical performance and concert production skills through participation in a “rock band” style educational setting.

Coachella Valley Weekly is inspired by his work and honored to celebrate him as ‘Best Producer’ for 2019. We spoke with Sturgeon recently as he conducted the arduous task of auditioning students for AMP.

On Winning ‘Best Producer’ for the Second Year in a Row:

“I feel honored and proud to be recognized! I’m passionate about making good records and I’m glad that other people feel that I do. There are so many great musicians and producers out here and I’m glad to grow alongside all of them.”

On the Highlights of His Producer Role:

“One of my highlights has been the range and diversity of projects I’ve been involved with in the past two years; ‘Dream Pop’ with The Flusters, ‘Country Rock’ with The Sieve and the Saddle, ‘R & B’ with eevaan tré, ‘Acoustic Pop’ with Lance Aaron and the Lonely Hearts, ‘Alt Rock’ with Before the Funeral, and recording a whole parody Country cover album, in one day, with the Red Neck Jeep Club (not a musical group – just a group of friends who go jeepin’). I also record my solo recording project, brightener, in The Sturdio. One of the hardest and best projects I worked on was with Israel Pinedo, a 16-year-old kid from Indio and alumni of AMP. The songwriting is great and after a two-year process, we got some recordings that we’re both happy with.”

“The Sturdio is a concept that kind of ties together many of the music projects that I’m personally involved with. It’s also the name for my production business, and a physical room in my house where I record. My last name is Sturgeon, so the name itself is a VERY hilarious pun on that, amirite?”
On What Artists Can Expect from The Sturdio:

“I want The Sturdio to be your one-stop shop for taking your song from its current state to a finished, professional recording. As a songwriter myself, I’ve honed my production skills through years of starting from nothing, writing music and lyrics, editing the lyrics and the structure, settling on an arrangement for the song that fits, engineering and recording all of the instruments necessary (drums, bass, guitar, keyboards, vocals) and then mixing it into a recording that sounds great. Because I can do all of that for myself, I feel like I can really fill in around the edges on whatever an artist may need when wanting to record their song. On some projects, I’m only there to hit record and mix the tracks together; on other projects, I am editing the songwriting structure and lyrics, writing the arrangement(s), singing backup vocals, and playing every instrument except for the artist’s own vocals. I aim to be flexible, and ultimately I want the artist (and me) to think that the finished product is exactly what they envisioned from the beginning.”

“The Sturdio is currently a room in my house in Palm Desert. It’s more about the ear than the gear, (catchphrase trademarked Will Sturgeon 2019), and I keep my space slim and useful. I have a UAD interface with a bunch of their incredible software plug-ins, and know my way around Logic Pro X. There’s so much I can do with today’s modern recording technologies. My one very much prized hardware piece is my Juno 60, straight from 1984.”

On What’s Next for Will the Producer:

“I have a lot going on outside of The Sturdio — I run the non-profit AMP and I have my own musical projects with brightener, SIBS, and my beat-making. So, to do a good job on my Sturdio projects, I’ve had to accept fewer moving forward, in order to ensure that I have enough time to do a quality and timely job on the projects I do commit to. I’d love to continue to hone my skills and elevate the music of the Coachella Valley in the next few years.”

On Balancing brightener, Producer and Executive Director or AMP:

“It’s tricky! I’m blessed to be so involved with music in so many aspects of my life, but it does get overwhelming at times. I have a very strict calendar that I adhere to, and I’m always working on honing my routine and making time for exercise and meditation.”

On His Production Credits:

“There is a playlist on Spotify called The Sturdio: Releases that you can follow. Many of my Sturdio projects are coming out later this year, but there are a lot of projects on that playlist currently that you can listen through. And if you want to get in touch with me to talk music or recording, email me at thesturdio@gmail.com.”

Look for The Sturdio: Releases on: