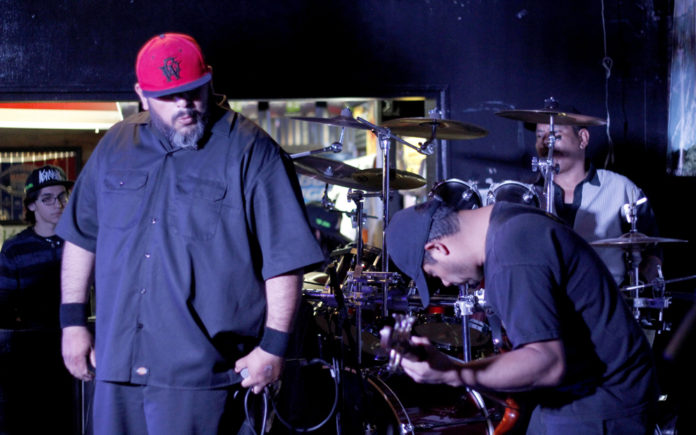 Funk-Metal masters Drop Mob will be performing on November 10, 2018 at STICKY FEST at The Palms located in 29 Palms with fellow desert rockers Throw the Goat, Sticky Doll, Sleazy Cortez, Brain Vat, Mega Sun, Instigator, The Wastedeads, Generic Response, Ormus. The DirtBays Satanic Johnny and UU. The all-ages event is outdoors and offers free camping. Tickets can be purchased for $12 now at https://www.accelevents.com/events/stickyfest2018accelevents.com or $15 at the door. Members of the military and children under 16 with parent receive free admission with identification.

Drop Mob is based out of Indio, California and is the collection of Gabe Perez on vocals, Dave Burk (DRB) on lead guitar, Steven Zepeda on bass and John Camacho on drums. Coachella Valley Weekly caught up with the Mob in anticipation of their performance at Stickyfest.

CVW: What have you guys been up to?

Perez: “We took a little time off to take care of some personal stuff but were back at it again! During our time off we’ve been working on new music.”

Burk: “We’ve been working on an EP and looking forward to performing live. I’m releasing a solo EP of instrumentals under the DRB name. DRB is my alter ego name as my regular name is quite boring. The music will be all things I love from tacos to shredding guitar acrobatics; short and sweet.”

What are your thoughts about Stickyfest? 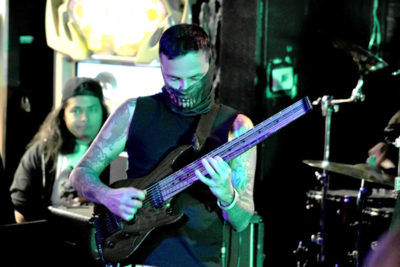 Zepeda: “It’s frickin’ bad ass and awesome! I’m glad that someone is stepping up to the plate for the local scene to engage our talent. Stickyfest could be the start of many more. I’m excited to attend and play with all the amazing bands that will be there.”

Perez: “There’s a lot of talent throughout the valley and a variety of styles. There are festivals for almost all genres except metal here in the desert. Thanks to Greg Gendron of Sticky Doll for setting up a festival that will feature Nu Metal to Punk. All the bands playing Stickyfest are talented bad-asses and we’re all gonna tear shit up!”

Perez: “I write all my own lyrics. They all come from my life experiences. We share these experiences live in a little more aggressive manner. We want to see the crowd bobbing and moshing if they feel it. We also hope to have them singing along to our songs.”

Perez: “Dave and Steve are two of the quietest bad-asses on the scene; same with John our drummer. They are my total opposite. I’m the talker.”

Zepeda: “David is the mad scientist of music composers/guitarists. I’ve known David since he worked at the video store. When we met up our conversations were always about music. He was doing his thing and I was doing my thing as far as the music scene at the time and I think at one point we jammed-out one time. I always thought one day we would jam again and years later here we are.”

In 2018 Drop Mob paired up with local rap and hip-hop artist 2Toxic for the bonus track “Set It Off” from the album Focuz. The song is available on iTunes.