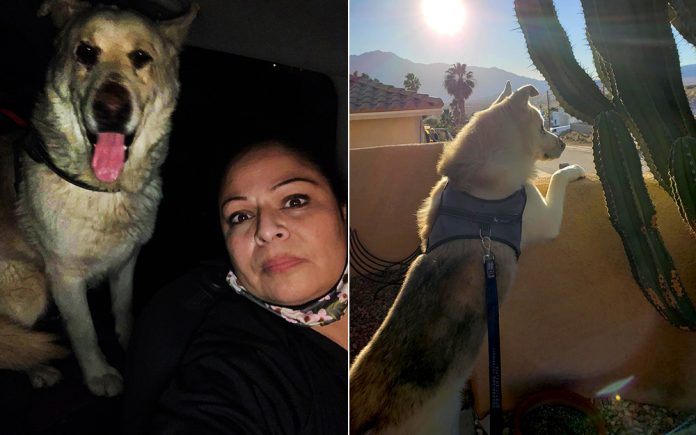 They are the rescuers.  There is an army of them across the country, united by their love for animals and a shared understanding of how amazing dogs are “medicine” for us humans.  We don’t just love dogs, we experience the healing magic they create in our lives. We get that they would risk everything to be by our side and sometimes risk their lives to protect us.  The curious way their presence in our lives nurtures and transforms us explains in part why we go to great lengths to save just one of them.  While other humans may disappoint at times, the dog is ever loyal and loving.

On December 1, 2020, Rebecca Aldrich Hansen posted the first Facebook photo of a stray Husky laying on a street corner in a Desert Hot Springs neighborhood.  Animal lovers began tracking the dog, and more sightings were recorded on social media.  Some of the rescuers were part of a loose coalition of rescuers, The Emergency Foster Group, that helps abandoned animals with foster homes and eventual adoption.  Others were new to the crisis facing homeless animals in our community. Danger lurked from packs of coyotes who roam our desert, as well as fast moving vehicles that kill and injure thousands more.  The drama unfolded during the weeks of December. Friendships formed while strategies were forged.  Hundreds of people in neighboring communities, including myself, anxiously logged on daily for social media updates about the husky.

Neighbors united to help, many of them actively trying to capture the large animal.  Others provided food and water.  Some worked behind computer screens sharing social media posts, gathering and sharing leads.  The dog eluded city animal control officers tracking him in their truck, and the smart fellow relocated to another section of the city after that.  Soon they learned he teamed up with a brown pit bull dog in his new area, perhaps for protection as well as companionship.

On the night of December 16, Georgina Rolden-Smith, and Cali Trevino set a trap while Vanessa Partida drove around searching for him.  Vanessa recalls, “I was thrilled and excited to be part of this rescue, especially for this special dog.  I decided to go back close to where we found him last night.  As I approached that area, I looked in my rearview and saw the shape of a dog walking.  It was dark, and the lights of an approaching car confirmed it was the husky.  I made a U-Turn and started following him. I was shaking, and though I wanted to text Cali and Georgina but I couldn’t.  I did not want to lose sight of him.  Then something interesting happened.  The nearby cars there turned out to belong to Georgina and Cali!  How does this happen?  The three of us were at the right spot at the right time without even knowing it.  Georgina told me she was going to try to push the dogs out of traffic and asked me to go to the other side of the street in case they went the other way.  When I drove back to where Georgina was, I saw the most beautiful thing ever!  The Husky and his Pitbull companion were close to Georgina and she was feeding them!  I have a video of that moment.  How does this happen?  It was mind blowing.  People have been trying to capture this dog since December 1, and no one has been able to rescue him until Georgina.  Georgina had only joined our group two days before, and now the job was done!  We are not a 501 (c) 3 organization, we are just a community who share a love for animals coming together.  We want to protect, care for, and provide loving families for them.”

Georgina “Georgie” Rolden-Smith, animal advocate and employee at Animal Samaritans Veterinary Clinic, is no stranger to rescue.  She is a major player among Coachella Valley animal lovers, having adopted many rescue dogs over the years, and networks to save countless more.  Upon learning about the wandering husky that roamed an area not far from her home, she couldn’t sleep well at night thinking of him suffering out in the cold.  She was heartbroken to see videos of how he laid in the street, lifting his head occasionally to look at a passing car, weary and perhaps giving up.  Her post about the stray Husky alerted others and united the five women who finalized the dog’s capture.  Georgina’s experience with catching other skittish and frightened dogs was the key to the saga’s happy ending.  (Once Georgina bravely stopped the traffic on busy Palm Drive in order to help a meandering stray Chihuahua get to safety, much to the amazement of the other drivers.)

On December 16th when Georgina set the large trap, she allowed time for her to check back to protect a captured animal’s safety.  As we know, the trap wasn’t needed.  It was a 3 hour saga from start to finish, with over 2 hours spent combing the area for a sighting.  After doing a U turn and corralling the dog towards a dead end street, Georgina knelt on the ground near the dog, not looking at him.  She had purchased $25 worth of fresh carne asada and tossed pieces of the meat in his direction.  Georgina tells us, “I knew not to chase him because that would cause him to bolt.  I tossed the meat closer to where I was, calming assuring him he was ok and he finally ate out of my hand.  I reached down and snapped a leash buckle on the harness he wore.  I then slipped a lead over his head.  When I looked at his face in my car, I could see the relief and trust as he relaxed, exhausted from his ordeal.”

The brown pit bull was more of a challenge to capture, but eventually Georgina got her in tow as well, finding out she was a female in heat.  It turned out she was a fence jumper in that neighborhood, and they reunited Duke’s traveling companion with her family.  Georgina offered to provide spaying and vaccines for the pit bull, but has not received a call yet to take her up on her generous offer.

December 17, Georgina posted this Facebook update: “This guy is a big sweet Teddy Bear.  You can just see the relief he feels.  Thank you Jesus!  These ladies are amazing, Cali Trevino, Vanessa Partida, Elanna Burke, and Yo Younger.  None of us knew each other until we ended up in the middle of the desert on a cold and dark night. None knowing the others would be there.  When it comes to helpless furry creatures there is no limit to what we will do to make sure they are safe and protected.  They count on us humans.  Because they have no voice, ours will never stop.  Side note – No microchip.”

It was a journey from the cold menacing streets to transformation in a loving foster home.  Duke’s transformation can be viewed on a You Tube video of a well groomed, well fed dog walking confidently with his foster parents Caroline and Stan Hall.  His “temporary” foster home turned into a more extensive commitment when they realized how well the grateful pup fits in with their family including the other pets.

Duke’s past is a mystery.  It turns out he is only 5 or 6 years old per his veterinarian’s estimates.  He appears older and “worn” due to apparent neglect.  He may have been abandoned by someone on the nearby Highway 62.  He appears to have been an “outdoor only dog”, perhaps for guarding purposes with little or no prior veterinary care.  Duke clings to his harness, and insists on wearing the only remnant of his past life.  He is a gentle sweet natured dog.

The rescue warriors have raised funds to pay for thorough vetting to ensure his health and future well -being.  Georgina takes Duke to work with her at the Animal Samaritans Veterinary Clinic for needed vet work.  Duke has had blood work, vaccinations, deworming, x-rays, and will be neutered.  The condition on his nose is being treated with antibiotics, and he continues to be evaluated after years of medical neglect.  He happily went to a groomer and had his mattered and overgrown fur made clean and lovely. 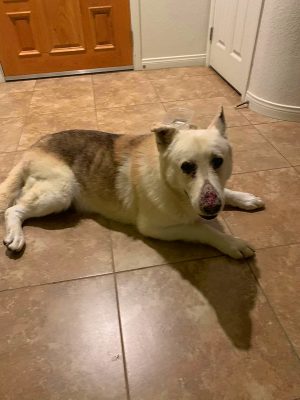 In addition to the five amazing women who captured Duke, many of you rescue warriors were part of his journey.  I don’t know all of your names, nor is there space to acknowledge your individual skills, bravery, and kindness.  You kept Duke alive, provided nourishment, blankets, leads on social media, and showed what a community can do when they work together. Kudos to Caroline and Stan Hall who opened their hearts and their home during the holiday season to foster this big precious pup.

There are many lessons from Duke’s miracle, but I hope everyone who reads this remembers the techniques Georgina Rolden-Smith utilized for his successful capture.  Understand that lost and abandoned dogs often develop a “flight” mindset. Often dogs who are friendly will instinctively run when someone chases them.  Use food to lure them towards you, gradually tossing tempting bits closer to her.  Sit on the ground, getting down to their level.  Inch slowly towards them.  Reassure them in a calm loving voice.

The rescue warriors are in communication regarding Duke’s medical treatment and foster status.  They are committed to seeing him through to adoption in a loving home.  These newly bonded friends are also committed to teaming up again when the next stray homeless pup comes to their attention.  There will be another dog on another day.  The “heart of rescue” understands the miracles we create for homeless dogs creates miracles for ourselves when we keep precious canine hearts beating across the Coachella Valley. Their transformation reminds us that we too can have a “second chance”.

(You might want to join me in making a donation to Animal Samaritans, a worthy charity at www.animalsamaritans.org located in Thousand Palms.)