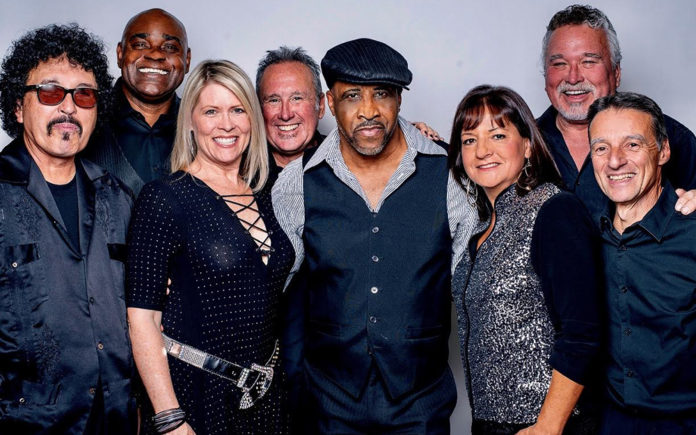 Art is so many things that enrich our lives. Music is an art that can transform us; it can move us; it can inspire us; it can make us happy. dysFUNKsion makes you want to dance!

dysFUNKsion is an 8 piece musical team that exudes happiness, disco platforms, New York Swagger and the pedigree to back it all up.. The music spans contemporary to disco to R&B but each song is just good feelings. This is live performance – no lip sync, no guide tracks. It is that element of engaging with the audience that keeps music alive.

Why do they do it? dysFUNKsion came together with the common goal to play 100% live music.  The husband and wife team of Johnny and Connie Henderson formed dysFUNKsion in 2006 while living in Seattle, Washington. They moved to the desert in April 2016 keen on bringing the sound of dysFUNKsion to the Coachella Valley.

Johnny, the bass player and King of Disco Flamboyant, is joined by brother Tim on drums and drummer, vocalists Connie LaClair-Henderson, Desera Charat and Eddie Gee, Keyboardist Paul Phillips, Percussionist Pat Henderson and Guitarist Mike Ruiz. Since coming to the desert the band has played The Palm Desert Country Club, The Hard Rock Cafe, The River Amphitheater, Tradition Country Club, The Club at Morningside and the Spotlight 29. In December they will be on the main stage of the Tamale Festival. The band is available for private functions.

How did these talented musicians get together? Love of performing is evident.  Love of music goes without saying.  Love of life that is most compelling.

“dysFUNKsion started when Connie and I were living in Seattle. When we came here the pieces began to fall into place. The depth of talent here is amazing. We were able to bring together a group of talented professional artists from our own backyard,” said Johnny. “We work together as a team. We respect each other’s talent. We share a love of the music we play. While it looks effortless, as it should, we put in the work.  We are always looking to improve the band and ourselves. The hard work is worth it when we see everyone having a great time.”

But what about those platform shoes? “I can move and play in them. I cannot move gear but that ok!” laughed Johnny. “Being in that dress is being part of the music that was evolving during the 1970’s.”

“We are playing music that takes us back to our youth,” said Desera. “It is hard not to move when you hear this music. From R& B to disco to funk – how can you stand still?”

“We engage with our audience,” continued Desera. “Our audience knows the words, or most of the words, to the music we play. It is energizing to hear them sing along and dance to the music.”

“Bad Girls is the exception – everyone knows the words to that song! Every one!! I can sing that song every night and every night the reaction is the same! It is iconic and everyone makes it their own!”

“When I was recording in Munich, my band recorded in the same studio that Donna Summer recorded that album, “ said desert icon Eddie Gee. “In a way the music dysFUNKsion plays is a lesson in history.  For example, the roots of hip-hop can be found in Funk. Every generation builds on the music that came before.  We are doing our part to keep not only this music but also live performance alive and well. This is our life and we want to share that exuberance. ”

dysFUNKsion may be the new kids on the block but they are 24-karat, ‘nsync talent! Toot toot! Beep beep!