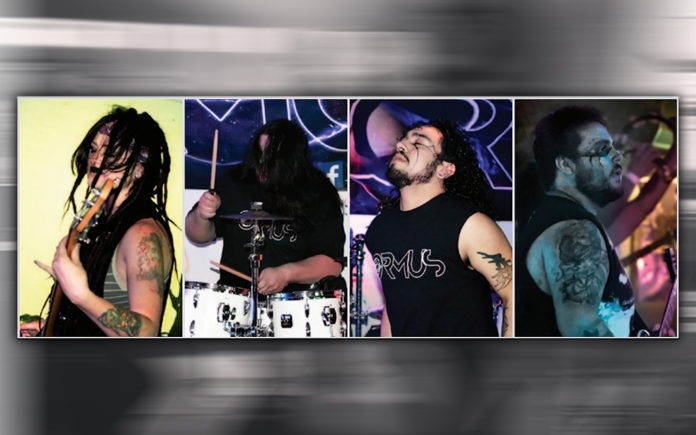 Stickyfest hasn’t even happened yet and it has brought our attention to some pretty amazing new hard rock bands. One of those bands is ORMUS. Comprised of four desert dwellers, ORMUS, a fictitious group of substances exhibiting many miraculous properties, is tangible and ready to astound audiences with their brand of high energy hard rock. ORMUS will be performing at Stickyfest on November 10, 2018 at The Palms located in Twenty Nine Palms, California with bands Throw the Goat, Sticky Doll, Sleazy Cortez, Brain Vat, Mega Sun, Instigator, The Wastedeads, Generic Response, Drop Mob, KARR, The Dirt Boys, Satanic Johnny and UU. The all-ages event is outdoors and offers free camping. Tickets can be purchased for $12 on-line or $15 at the door. Members of the military and children under 16 with parent receive free admission with identification. You can purchase tickets now at: accelevents.com/events/stickyfest2018. ORMUS is: Martin P. on the unclean and clean vocals, keyboards and tambourine, Chaz M. on guitars, Dave F. on percussion and Serene T. on bass and vocals.

Coachella Valley Weekly spoke with the band in preparation for their Halloween shows and Stickyfest.

CVW: Can you describe the ORMUS sound in layman’s terms?

SERENE: “I like to think of ORMUS as a good soundtrack for when the world burns.”

CVW: ORMUS is undoubtedly heavy music. In many opinions, metal has always maintained a kind of “underground” reputation. How can ORMUS further legitimize hard rock or should bands in this genre be content with the way things are?

ORMUS: “Legitimizing a genre as an underground band is a difficult task to tackle. By the time you get to the point where you can have an effect on an entire scene/genre, you’d already be big enough to realize the amount of pull or influence you have.”

DAVE: “We feel that we are not currently at the stage in which we are able to have a notable effect on the scene or help legitimize “heavy music” nor do we aim to, as much as we would like to. We currently are in the stage of making ourselves known within the scene and to hopefully get to a place where we can live off of doing what we love; creating and sharing our music with people. As far as the place that “heavy music” currently has in the desert, we realize that we may not be able to compete with bigger city scenes like Los Angeles or San Diego but we are excited to see that the scene here is alive and well, moving and growing.”

ORMUS: “Our music, as of today can only be found at reverbenation.com/ormus6 but we will soon be on most major streaming services (Spotify, Apple Music, Google Music, Amazon Music, etc.)”

CVW: You call Sky Valley, CA home. How much does the environment impact the music?

ORMUS: “Individually, we are from all around the valley, from East to West. ORMUS was born, as it is today, in Thousand Palms.  We’re basically in the middle of nowhere, you know.  We can be as loud as we want and since the general aesthetic of the valley seems to be pretty bland, we figure why not add some color to it through music.”

SERENE: “We formed in Thousand Palms, but we spend our time practicing and recording in the wide open spaces of Sky Valley where the natural ambience flows through, fueling our creativity.”

CVW: If you could get on a bill with any 2-3 current metal acts in the desert or beyond, who would they be?

SERENE: “I like to think big and would love to play a show with Avatar, Jinjer, and Twelve Foot Ninja.”

CVW: What are your thoughts on Stickyfest and furthermore, the metal scene in the Coachella Valley/High Desert?

ORMUS: “We’re excited about the show and the lineup has a lot of good acts, we don’t really know what to expect except a lot of fun.  As far as the low desert is concerned, we feel it’s going well, there’s definitely a lot of talent. Can’t speak to the high desert but we feel like that says enough in and of itself.”

SERENE: “Stickydoll is really putting themselves out there to support the local scene and I have faith that Stickyfest will be a hit. I’m proud to be a part of it.”

ORMUS is space, death, thrash and speed metal that is unabashed. They were obviously built for the live setting and we look forward to their recordings being available for purchase. If you’re in the area Halloween weekend or can make the trek to Stickyfest don’t miss ORMUS.