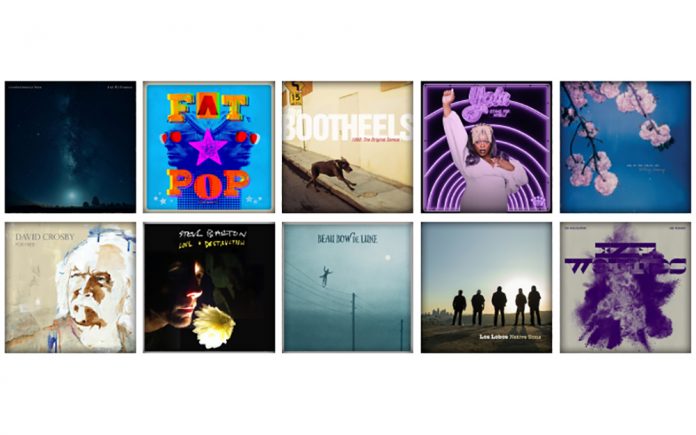 Jimmy Cliff wrote and recorded that song over 50 years ago, in response to the death of his mentor and producer, Leslie Kong. But it drifted into my mind this morning, as I contemplated this last year, and I realized it seemed completely apropos when summing up 2021, especially for the music community. After more than a year of Covid lockdowns and limitations, venues have finally begun to reopen, bands are back out on the road, but with the emergence of the Omicron variant, everything may shudder to a stop once again. After 800,000 Covid deaths, you would think people would mask up, get their shots and get back to their freedom-lovin’ lives. But that rant is for a different kind of column. Right now, I’m just going to fully record-nerd out and tell you about my 10 favorite albums of 2021.

For Ani, the personal has always intersected with the political. Those themes beautifully coalesce on her 20th studio album. The songs unfurl slowly, echoing the intimacy of Joni Mitchell’s Blue and Marvin Gaye’s What’s Going On, (epochal 1971 albums that both hit the half-century mark this year). Marital bliss sustains a blow on Bad Dream, while “Simultaneously” untangles the duality of human nature. Her POV expands globally on the both the languid title track, as well as the effervescent first single, “Do Or Die.” Meanwhile, on the sleek and serpentine “Contagious” she borrows Michelle Obama’s sagacious mantra, “When they go low, we go high.” Throughout her 31-year career, Ani has made watershed records, beginning with “Out Of Range,” and continuing with “Dilate,” “Little Plastic Castle” and “Knuckle Down.” Stacked with tracks that limn domestic discord, deep introspection and what John Lewis characterized as good trouble, “Revolutionary Love” can be added to that august pantheon.

15 long-players, six EPs, several live efforts and a soundtrack score later, he has released Fat Pop (Volume One), written and recorded from scratch, during the pandemic. Tackling a plethora of styles, the songs hopscotch from Electronica, stripped-down Punk, Creamy Soul, introspective acoustic-Folk, Gospel, Funk, Blues and Jazz. Following in the footsteps of heroes like John Lennon, Curtis Mayfield and Marvin Gaye, “That Pleasure” offers a veiled response to the murder of George Floyd and the Black Lives Matter movement. The title-track is a stone-cold gas, blending squiggly synths and skittery guitars, as lyrics salute the salubrious effect Rock & Roll has on the soul. Then there’s “Testify,” Paul’s electrifying call to arms is a combustible combo-platter of sounds. But then, every track on this album is a mind-blower.

R.E.M. their sound was equal parts sharp and shambolic. Trace elements of Punk, Country and Stones-y swagger can be found in these demos, which should have secured a record deal. Obviously, Luther, Tobi, Jakob and Aaron went on to bigger and better things. But for one brief shining moment, The Bootheels created some righteous, raucous and ramshackle noise.

The album is the perfect blend of instrumental prowess and laid-back attitude. On “Brush Strokes,” Humor and humility are equally on display Meanwhile, on “Reverence Al Green Dream,” the Sunshiny AM Pop melody pairs nicely with stacked, Beach Boy-esque harmonies and lyrics that pay obeisance to sanctified Soul giant Al Green. Then there’s the irresistible ‘70s AOR crunch of “No Trouble In The Bubble.” These guys already have steady, fulltime gigs, but BBdL offers a pleasant detour.

So that’s it, my Top 10 for this year, I would remiss if I didn’t take a moment to shout-out a few albums that nearly made it onto this list. That includes Wes Stace’s stylistic about-face, Late Style, the blast of pure Punk energy found on Beebe Gallini’s debut, Pandemos and Tony Marsico and his recently resuscitated Cruzados return, She’s Automatic. And…even though it’s not music, per se, I must genuflect to Rickie Lee Jones’ brilliant autobiography, LAST CHANCE TEXACO: Chronicles Of An American Troubadour. Not only does it chart the course of Rickie’s first quarter of a century, it does so with humor, heart and a stunning measure of candor. This no-holds-barred account of her tumultuous childhood, wild-child teen years and struggle to make it as a singer-songwriter made me love her all the more. I didn’t think that was possible. But enough mushy stuff. Onward and upward to 2022. More music, more shows, less Covid, no masks. Maybe we can finally party like it’s 1999.