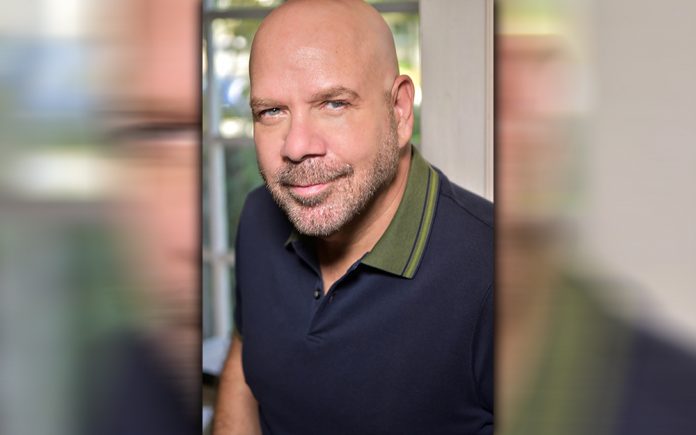 Actor and comedian Jason Stuart has seen an eventful year in 2021. In addition to his show-stopping comedy performances, Stuart has had successful recognition with his Amazon, Revry / Apple TV / U Tube comedy series Smothered. He also starred in the Billy Bob Thornton drama series Goliath opposite Oscar winner J.K. Simmons.

Besides his acting ventures, Stuart also released his online comedy album I’m the Daddy and I Have Candy and his autobiography Shut Up, I’m Talking! that came out during the height of the COVID-19 pandemic.

“I always do shows with comedians who I know and love. One thing I try to prioritize is having more women in my show because they don’t always get the same opportunities that guys do in the comedy world,” stated Stuart.

Stuart’s comedy show focuses on his dating life as a single gay man and moving next door to his mother. He pokes fun at his so-called “spinster” life and promoting his own hashtag—#StillSingle.

“I live next door to my Jewish mother, but I do not live with her. There’s a difference! I live upstairs and she lives downstairs and one over. It’s almost like an L-shape, which means ‘loser’,” joked Stuart. 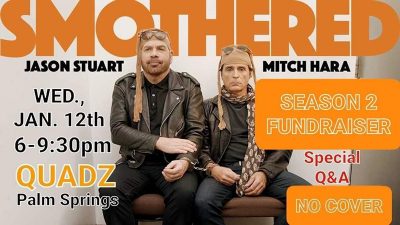 All attendees are asked to provide proof of vaccination and masks must be work per California COVID-19 regulations. Seating prices range from individual seats at 25 dollars, table seats of four at 120 dollars and premium couches seating three at 120 dollars. All Desert Rose Playhouse ticket purchases are non-refundable.

After the comedy show, Stuart will be attending a fundraiser for the 2nd season of the series he co-created and co-stars with Mitch Hara, Smothered. The fundraiser will be held on January 12 from 6 p.m. to 9 p.m. at the Quadz Video Bar in Palm Springs, showing video clips of the first season of the hit series and Stuart and Hara’s careers.

The event will be hosted by the Filmmakers Gallery’s Paul Belsito and Steven Roche. There will also be a special appearance by Felipe Rose from The Village People, where he will be playing his new hit dance song “Dance Again”. The end of the fundraiser will feature a Q and A with Stuart where attendees can get more insight into his life and career.

“It’s great being a Palm Springs local. I feel really welcomed and supported when I do shows here. I also feel like the crowd really gets me,” shared Stuart, who claims to be very selective of where he performs.

Stuart is currently working in pre-production for the second season of Smothered, which was up for an Emmy nomination and garnered over 50,000 views on its streaming platforms. The show centers on two married men who hate each other and have been together for 30 years, but cannot afford to get a divorce. Episodes can be viewed on smotheredtv.com.

“I never thought I’d make my own show. I didn’t even think I had the ability to do it. I’ve had 15 deals to make a show over the years, and they all fell through,” revealed Stuart.

Looking back at his unexpected film career, Stuart recalls a scene in Goliath that he shared with A-list actors Bruce Dern, J.K. Simmons, and Haley Joel Osment. Everyone had been nominated for an Oscar except for Stuart, and he recalls how nervous he felt in that moment but also how much gratitude he had to get the opportunity to experience it.

“I feel so lucky to be able to do all this. I encourage anyone to come to the show, laugh their head off, and have fun,” encouraged Stuart.

Tickets for Stuart’s comedy show can be purchased at desertroseplayhouse.org