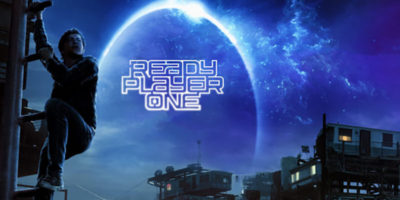 Before I even saw this film based on Ernest Cline’s eponymous bestseller (the pop-culture obsessed screenplay is by Cline and Zak Penn), I was already a bit put-off by the many postings of RPO movie posters that referenced previous hit movies like THE MATRIX, RISKY BUSINESS, THE IRON GIANT, THE SEVENTH SEAL, THE GOONIES, BACK TO THE FUTURE, RAMBO and so on.

Steven Spielberg’s latest big budget ($180m before advertising) mash-up of action, nostalgia, sweetness and eye-popping effects is like eating a Twinkie.  There’s no real nutrition in the sponge cake with it’s synthetic filling.  In fact, what’s the appeal beyond the sugar rush and comforting familiarity of rekindling childhood memories?

The sci-fi adventure is set in the year 2045 when our over-populated, corporatized world is on the brink of chaos and environmental collapse.  Sound familiar?  I almost expected to see Spinners and Blade Runners!  It’s a time when people have found escape from their harsh reality — or is it salvation? — in the OASIS, a vast, seemingly infinite virtual reality universe created by the brilliant eccentric James Halliday (Mark Rylance) in which “players” can live as avatars of their own creation, go anywhere and do anything.

When Halliday expires, he leaves his incredible fortune and control of OASIS to the first person to find a digital Easter egg hidden somewhere in the OASIS, sparking a contest that grips the entire world – the “real one.”  When an unlikely young hero named Wade Watts (Tye Sheridan) decides to join the contest, he is hurled into a breakneck, reality bending treasure hunt through a fantastical, mysterious and very dangerous universe.

The poster’s tagline: “An adventure too big for the real world” is a bit misleading because if the movie has a point, it’s that reality has more to offer than any synthetic construct no matter how alluring or convincing the artifice may be.

There’s so much more to be said regarding our mind-boggling technological advances, especially re A.I. and the ability to create convincing, photo-realistic alt worlds that everyone has access to in the palm of their hands.  The issue of surrendering control of our lives to computer assisted, seemingly all-knowing, almost God-like cyber entities is not explored in Spielberg’s film.  Beyond the admittedly stunning visuals, there’s a cold void where it’s heart should be.  However, I did like the thematically and morally solid but limited battle between corporate greed and the real world’s natural rewards.  Pass the Twinkies please.  A missed opportunity.

ALL THE MONEY IN THE WORLD 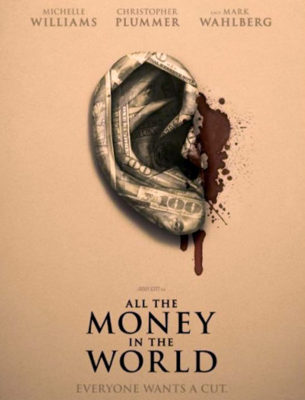 Follow the kidnapping of 16-year-old John Paul Getty III (Charlie Plummer) and the desperate attempt of his devoted mother Gail (Michelle Williams to convince his billionaire grandfather (Christopher Plummer) to pay the ransom.  When Getty Sr. refuses, Gail attempts to sway him as her son’s captors become increasingly violent and brutal.  With her son’s life in the balance, Gail and Getty’s advisor (Mark Wahlberg) become unlikely allies in the race against time that ultimately reveals the real value of ­­– and, differences ­­between — love and money.

Director Ridley Scott masterly recreates a time and place in this compelling and satisfying historical thriller.  The tight screenplay by David Scarpa was adapted from John Pearson’s book.  There are wonderful exchanges about the meaning of having great wealth and the true and perhaps meaning of acquiring value of beautiful things.  Interesting extras include 8 deleted scenes, “Ridley Scott: Crafting a Historical Thriller” and “Recast, Reshot, Reclaimed” a featurette that examines the recasting of the character J. Paul Getty just weeks before the film’s theatrical release! 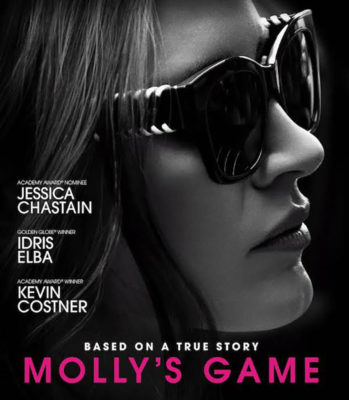 From writer/director Aaron Sorkin, the mind behind The Social Network, The West Wing and Moneyball comes the incredible true story of 26-year-old Molly Bloom, who through sheer nerve, wits and acumen builds an empire and takes over the ultimate boys club: exclusive high-stakes poker.

Two-time Academy Award© nominee Jessica Chastain delivers a powerful performance as the determined and tenacious Molly, a former Olympic class skier, who ran the exclusive games for a decade becoming a target of the FBI.  Her players included Hollywood royalty, sports stars, business titans and, unbeknownst to her, the Russian mob.  Her only ally was her criminal defense attorney Charlie Jaffey (Idris Elba) who discovers there’s much more to Molly than the tabloids led us to believe.  Recommended.  Sony.  Blu-ray.