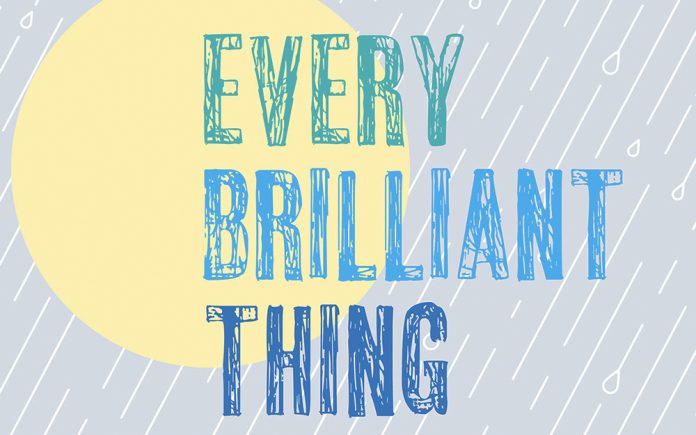 Suicide is the 12th leading cause of death in the U.S.  In 2020, there were 1.20 million suicide attempts and 45, 979 Americans who died from their self-inflicted lethal efforts.  Suicide isn’t normally a topic described as entertaining or engaging, but Every Brilliant Thing, written by Duncan MacMillian with Jonny Donahoe, manages to be a script that is so moving, touching, humorous and engaging, that it’s near impossible to look away from the eventuality of the outcome.

This one-person show, originally produced in 2013, is not based on a true story, but touches the truths of many stories.  The show was most recently presented at Dezart Performs in a ‘Theatre in the Round,” arena, with no sets or costume changes, minimal props and a single actor, and it was one of the most powerful shows presented this season.

Every Brilliant Thing, is the journey of one man’s efforts to make a list of everything that is brilliant about the world, so that his mother may see all of the things worth living for. Over the course of his lifetime, he manages to list a million things that are ‘brilliant.’

Macmillan, has described his reasons for writing the play as to communicate to people “You’re not alone, you’re not weird, you will get through it, and you’ve just got to hold on. That’s a very uncool, unfashionable thing for someone to say, but I really mean it. I didn’t see anyone discussing suicidal depression in a useful or interesting or accurate way.”

Every Brilliant Thing, is a play about depression and the lengths we will go to for those we love. But it’s also about finding joy in all of the simple things that surround us.

Joel Bryant, is the Storyteller. Beginning at age six, facing his mother’s first suicide attempt and traveling throughout the journey of his life as he discovers love and loss. Bryant, is without doubt, one of the most brilliant things in this show. His ability to evoke laughter and poignancy and take the entire audience with him on this journey of love, sadness and joy, is pure magic.  Bryant, is a master of his craft.

In theatre there are four walls surrounding a stage. Three that are solid and the 4th wall is the one between the performers and the audience.  The 4th wall is rarely breached. The vast majority of plays maintain the integrity of their world, as if not being observed by a crowd of voyeurs sitting in the dark behind an invisible wall.  But MacMillian’s script shatters the 4th wall and demands that the audience becomes engaged.  A few are pulled in as characters, but everyone is given a card with a numbered ‘Brilliant thing,’ from the storyteller’s list, which they must read when that number is called.

Deborah Harmon, directs this piece. Harmon, is without doubt one of the desert’s most gifted directors.  She infuses a sensitivity in her staging that brings this story to its fullest heights.  In her ‘Director’s Notes,’ Harmon, comments that Bryant “owns this play in a way that I have never seen an actor own a role.”  I most definitely concur with that assessment.  But Harmon’s own gifts to this show are apparent.  This production is a shining example of a synchronicity that defines the wonder of theatre.

Bravo to Dezart Performs and Producers Michael Shaw and Clark Dugger.  Every Brilliant Thing was originally slated to be the closing show of the season that was abruptly ended by the pandemic in 2020.  Instead, it brought brilliance to the conclusion of Dezart’s current season.

If you or anyone you know is in need of support:

Dee Jae Cox, is a playwright, director and producer.  She is the Cofounder and Artistic Director of The Los Angeles Women’s Theatre Project.