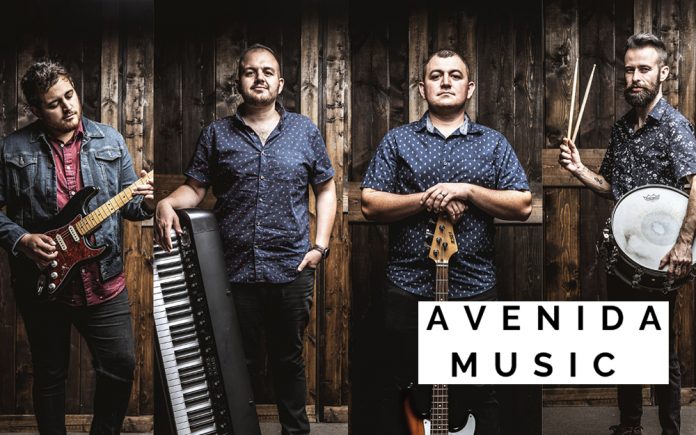 As far as bands go, Avenida Music has been a homegrown favorite in the desert scene for quite some time. The band of brothers consists of Sam Gonzalez on bass/vocals, Vince Gonzalez on guitar/vocals, and Josiah Gonzalez on keyboards, with Sean Poe on drums. Gracing the stage and performing at numerous weddings, parties, events, and celebrations of life, the band has taken a huge step to further integrate Avenida Music into the Coachella Valley community.

The band is currently in the final stages of leasing a two-story 5,357-square-foot building in downtown Indio with a goal of turning it into the best indoor music venue and taproom in the east valley. The lease for the building at 82-707 Miles Avenue was approved 3-0 by the City of Indio. The lease agreement with Avenida Music is for three years.

“We used to have a space that we rented on the same street and we would daydream about having that corner building because it was a cool spot. We ended up vacating the previous building we were in and asked about acquiring that building on Miles. We came up with a proof of concept and business plan for the city that outlined our goals for the space back in October and we are now finalizing it,” explained Sean Poe.

Avenida Music were previously subtenants for the Academy of Musical Performance (AMP). Josiah Gonzalez approached the AMP director in 2019 to discuss taking over part of the building to make it their personal studio. Avenida Music successfully used the space for live concerts and other community events until the COVID-19 pandemic began, putting a stop to all gatherings.

Coming out of the pandemic, AMP needed that space back as they wanted to expand their programming and gave Avenida Music a 30-day notice to vacate last October.

“We already had experience speaking to the City of Indio and spoke to the Director of Economic Development and asked about available buildings and the new downtown-specific plan the city had. We were able to move forward with sharing our own business plan that catered to the desires and outlook that the city laid out for us,” added Josiah.

Avenida Music has been playing together as a band since 2017 and became incorporated as an LLC in 2019. The band members became business partners and all own 25 percent of Avenida Music. A concept for a longterm vision for the band was developed in late 2018, and the bandmates continue to update their business plan. The band has trained with the Coachella Valley Small Business Development Center and utilized local resources to figure out how businesses work.

“This was a natural step for the band. We adjusted our business plan so that there still will be live music, corporate events, and residences, but responsibility will shift regarding the new venue,” stated Josiah, who also acts as the CEO of Avenida Music.

The members of Avenida Music want to ensure that local and regional musicians and artists feel like they have a home in the downtown area. The band also wants to get involved in the community and have reached out to nonprofits like Desert Arc with the intention of hiring people with developmental disabilities at the new venue. Avenida Music strives to help provide outlets for music in the Coachella Valley while also giving back to the community of Indio.

“When I think back to where we were a few years ago and where I see us now or in a couple more years, I get really excited for the future,” said Sean.

“And what I think I’m most excited about is being able to have a platform for musicians and artists to take the talent that they have and turn it into a career. It’s really hard to find footing sometimes because there’s not a lot of resources for artists starting out, but we understand the struggle because that’s what we do,” stated Josiah.