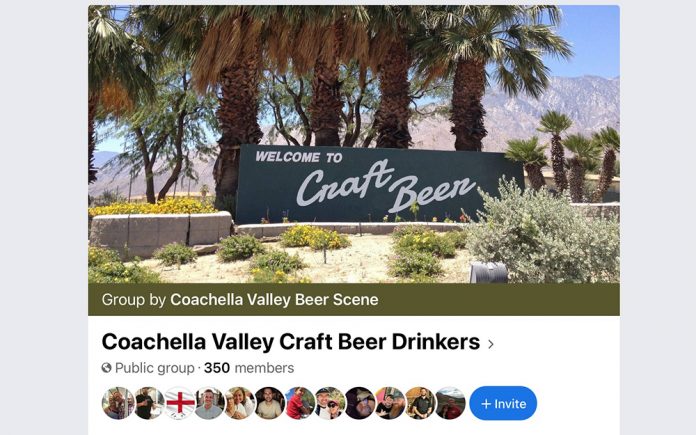 Beer lovers are most certainly as passionate a group as any; and craft beer lovers? Well, even more so. While novelty may be considered their call to arms, it is scarcity which enables their game to ratchet up another notch or two. But raise a doubt about the latest one-time release from a favored brewer and watch passion morph to fury in less than a heartbeat. The evolution of internet beer scoring has certainly changed over the past three decades.

In the early days of the internet, BeerAdvocate.com became the leader of the pack in terms of advancing beer education and chat forums. Founded by Jason and Todd Alström with the tagline Respect Beer, the brothers gave lovers of the world’s oldest alcoholic beverage a place to gather, review, and discuss beer in greater depth than any platform before or since. As a seventeen-year member, I’ve seen the progression of passion of craft beer fans all over the globe.

BeerAdvocate has single-handedly led to the growth of what brewers refer to as the hype train. So, you might ask, what exactly is a hype train? Simply stated, it’s an underground swell of support for a particular beer, brewery, of brewer (and often a combination of the three). In the past 10 years, BeerAdvocate has become less of a dominant force, acquiescing to more local themed pages on Facebook and Instagram. These local pages include local and regional groups such as the Coachella Valley Craft Beer Drinkers on Facebook, currently sporting exactly 350 members as of press time.

The CV Craft Beer Drinkers page gives the local populace a chance to show off their cans (ahem) so to speak and to give props to brewers both distant and local. It also allows Coachella Valley Retailers who are members to occasionally post special beer events or simply to remind desert residents that they are open and ready for business.

Far and away, the biggest gainer in the online beer review market goes to (drum roll, please) the Untappd application for iPhone and Galaxy. Free to download and use, Untappd has almost singlehandedly turned every user into an unqualified critic. The app not only encourages users to check in the beers that they sample, it does so by rewarding badges for everything from the ‘Untappd at Home’ badge (thanks Covid!) to various endeavors such as ‘God Save the Queen’, awarded for checking in British beers, to stylistic check ins such as ‘Haze for days’ which reward the user for exploring the many variations within a particular beer style.

Untappd realized early on that the awarding of badges would turn their userbase into Train Spotters…folks who would purchase and sample a beer just for the privilege of checking it in on the app. They created Local Badges (for the benefit of regional brewers and beer destinations), Beer Badges for every style, country, and occasion imaginable. The Liquid Lunch badge rewards those who check their beer in between 11am and Happy Hour…and if you cannot possibly wait that long to begin your beer exploration, there is also a Top of the Mornin badge for check-ins from 5-11am.

For good or for bad, Untappd badges seemingly encourage and motivate the younger drinking sect. in looking at my personal account, I’ve checked in over 4,600 different beers over the past nine years. Since I pay little to no attention to the badges, imagine my surprise when I realized that I had earned a total of 3,201 badges for my efforts. Now, if I could trade those badges for something worthwhile like $1 per gallon off a fill-up, I might be motivated to pursue, collect, and trade them with my friends, to borrow a phrase. Since they are in electronic form only, my mantra is that we don’t need no stinkin’ badges. (But, I’m not the target audience)

The real dilemma of Untappd is that each beer checked in by a consumer also awards each participating member with the ability to rate said beer on a scale of 1 (bad) – 5 (outstanding) in quarter-point increments. This is where the true fun begins; Craft beer enthusiasts range from Expert (Such as brewers, Beer Judge Certified Members, Cicerone levels 2-4, etc.) to everyday folk who just like to try different beers while out and about. As someone who has toiled for the better part of thirty years to understand and judge beer, the rankings of the untrained general public can not only be confusing, but confounding as well.

What the general populace using Untappd doesn’t understand is that all of their cumulative scores result in an overall rating for not only a particular beer, but for a brewing operation as a whole. Owners and Brewers tend to keep an eye on Untappd ratings in an effort to not only look for emerging market trends, but to track the performance of both core and specialty offerings. Paying attention to these numbers reaps dividends in terms of continuous improvement and future stylistic exploration. 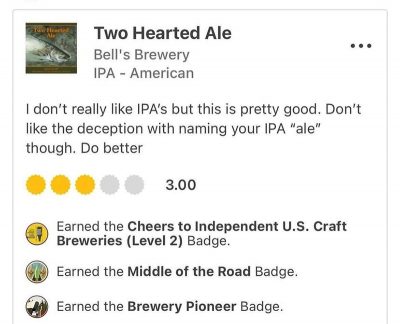 When Joe or Jane Untappd User enters a ranking for a beer, the tendency is to rate on the “how much do I like this” standard. This may serve the individual user quite nicely, but it has a way of skewing the beer’s overall rating for a beer in a negative way. It is quite common for reviews to have rating explanations such as, “I don’t really like IPA’s, but this is pretty good. Don’t like the deception with naming your IPA ‘Ale’ though. Do better”. To a true craftsman and beer judge, there are a couple of things that are really wrong here. If you ‘don’t really like IPA’s’, then please don’t rate them. You will still get your check-in and presumably your three stinkin’ badges, so not including a rating is really a no harm, no foul way to go about this. My second point is that it is far better to remain silent and have folks think you are a fool than to begin typing your unqualified comments and suddenly remove all doubt. In case you haven’t guessed it, every IPA made since the beginning of time has fallen into the Ale category.

Please, my gentle readers, be nice to your local brewers when clicking away at your beers. As my Father always reminded me, “If you don’t have anything nice to say, say nothing at all”.

(When Ed Heethuis isn’t brewing at Spotlight 29 Casino for 29 Brews, you will find the Certified Cicerone® / Brewmaster out on his road bike, training for the next Competitive Sleeping competition, or talking beer with the patrons at Taproom 29. He may be reached at: heethuis.ed@gmail.com or wherever beer may be found in the wild.)