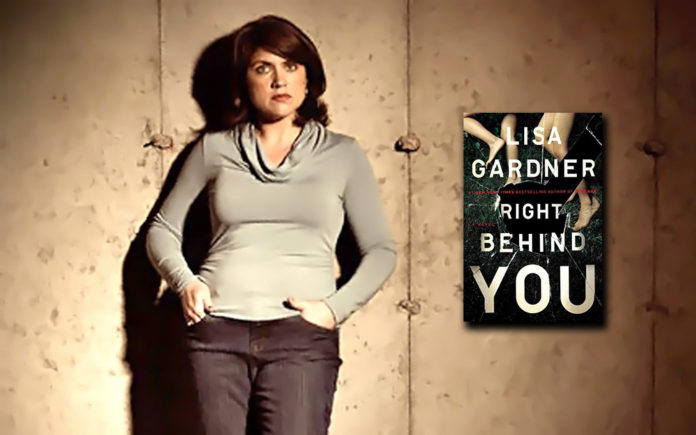 —–
Right Behind You
by Lisa Gardner – Fiction
—–

Family should always have your back. But, not so they can better stab you! In Lisa Gardner’s, Right Behind You (Putnam, 391 pages) one family tries to stop the bloodshed.

The story opens with a boy remembering his young life and dysfunctional family. He recalls his parents’ fights, their drugs and alcohol abuse. His best memories are of helping his little sister eat her cereal, get her to the school bus on time and reading to her at the library — a place where they could escape the chaos of their home life.

The boy is Telly Nash, and one night he killed his father to protect his sister. His father stabbed his mother to death and then attacked the kids. It was his sister, Sharlah, who handed him the murder weapon – a baseball bat. The rest is a painful blur.

Telly, eight-years-old at the time, was not charged with a crime. The judge decided it was a clear case of self-defense. But, once orphaned, the children were permanently separated and put into the state’s foster system.

Years later, Telly has bounced around foster homes and is in constant trouble. A senior in high school, he is about to age-out of the system when a couple, the Duvalls, take him into their home. The couple has a son away in college, and wants to help Telly get ready for life on his own. This includes learning how to cook and shoot guns.

Meanwhile, Telly’s sister Sharlah is about to be adopted by a husband and wife law enforcement team who consult as criminal profilers. Sharlah is 13 and can only remember bits and pieces of what happened to her family. She was seriously injured during the childhood attack.

After the murder of two people at a convenience store, Sharlah’s soon-to-be parents are asked to profile the killer for the local sheriff. The only suspect looks to be Telly.

Soon, it is clear to the profilers they are searching for Sharlah’s only living family member. Telly is considered armed and dangerous, on a shooting spree probably caused by some kind of psychotic break.

Sharlah, worried about her foster parents being attacked by Telly, sets out with her German Shepard to find her brother first. She wants to know the truth about what happened, not only at the convenience store shooting, but about the fateful night her family was destroyed.

This story held my attention. To begin with, kids who kill is always a fascinating subject.

The author does a terrific job drawing the reader into Telly and Sharlah’s fractured world. Teaching a troubled teen target practice seems like a terrible idea. What on earth is Mr. Duvall thinking?

But, as we get to know the Duvalls from Telly’s point of view, we learn just how much he respects and loves them. So when they turn up dead, we are shocked and in disbelief that Telly could have killed them. Yet, if he didn’t do it, who did?

As the big picture of events unfolds and the police are hot on Telly’s trail, Sharlah hopes to reconnect with her brother before it’s too late. When she does, Sharlah is overwhelmed by love for the brother who saved her life, leaving the reader little doubt the boy is a hero. But still, the evidence against Telly is overwhelming.

Kudos to author Gardner for trusting the reader and weaving such an engaging mystery without it becoming too convoluted and far-fetched.

So, yes, maybe there are one or two things that finally don’t quite connect, but overall, I was rooting for these kids survival emotionally and got completely caught up in their difficult world.

What really works is that Sharlah’s law enforcement folks, who genuinely love the child, want their daughter to connect with her only family. They see the enduring value of the family bond. So they believe her when she tells them Telly is not a killer. They then use all their skills and resources to get to that truth.

Right Behind You is a fun thriller and unexpected psychological drama. The serious issue about children being able to bond and how that forms in their early life was fascinating.

The bonding theme resonates throughout the story and is often quite moving. I particularly appreciated the significance of the relationship between Telly and Mrs. Duvall.

My only beef with this book, and any other for that matter, is the pages and pages of italicized print. I find it hard to read. As readers, we get it’s a different voice and time period, please trust that we can follow without the italics to tell us so.

Although Gardner reprises some of her characters from her other published books, it is the children’s powerful narrative I most appreciated.

No doubt, Gardner has a new franchise ahead when little Sharlah grows up to become a detective herself.