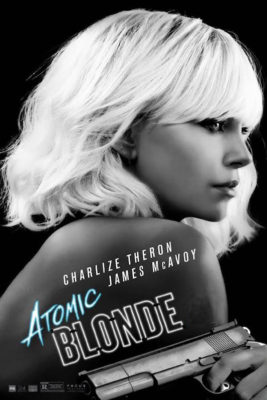 Is anyone more deserving than Charlize Theron to be crowned Hollywood’s next action hero? Consider “Atomic Blonde” if more proof is needed.

Lorraine Broughton (Theron) is a female James Bond. Sexy and tough, she’s one of the best spies in MI6 because she has no problem using her feminine wiles (is that still a term?) and deadly skill set to survive what seem impossible missions.

The time and place of the story unfolds during the final days of the Berlin Wall. Broughton’s orders are to investigate the murder of a fellow agent and to retrieve an invaluable missing list of double agents and, finally, to bring down a brutal spy ring!!.

Broughton boldly and bravely penetrates the heart of the volatile, divided city. Once there, she teams up with an embedded station chief (James McAvoy) to help navigate her way through the deadly web of political intrigue.

Careful production design amplifies the 80s vibe as does the great music track. 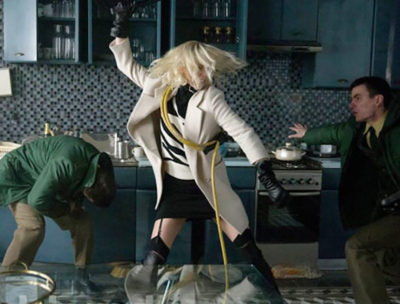 Clearly the primary draw for this spy-vs-spy thriller is the undeniable thrill watching Theron, an Amazon in red patent-leather stilettos, dismantle German cops with breathtaking efficiency while George Michael’s “Father Figure” blares over a boom box. As murky the visuals and muddled the plot may be, it’s the eye-popping action that’s the real draw here and where you get your money’s worth. The touching and unexpected lesbian love scene is the most honest and human moment in the entire film. It’s a fascinating, and welcome revelation of Broughton’s true persona that fleshes out (no pun intended) the dramatic tension.

Considering director David Leitch’s past as a stunt coordinator, it’s no wonder the movie’s core set piece is a supremely well-choreographed fight inside a closed stairwell that reminded a bit of “From Russia With Love” and Bond’s fight in the train car. It’s always nice to see long action takes with no cg. I always notice, don’t you? 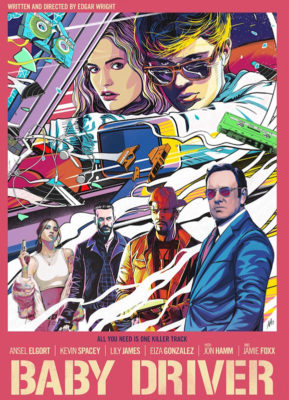 Talented getaway driver “Baby” (Ansel Elgort) literally relies on the beat of his personal music mixes to be the best in the game. After meeting the woman of his dreams (the beautiful and charismatic Lily James), he considers an unexpected opportunity to ditch his shady and dangerous gangster life and make a clean break, but — as often happens in these kinds of stories – he’s coerced into working for crime boss (Kevin Spacey) one last time. Now Baby must face the music as a doomed heist threatens his life, love and freedom.

This wonderfully engaging, fast-paced action film runs full-throttle from fade in to final frame and proves that good writing need not sacrifice great action — especially when energized with a killer soundtrack.

Top pick of the week

See the implied backstory (strictly speaking, it’s not really an origin story) of perhaps the most powerful cinematic monster myths of all in this intense, action adventure from director Jordan Vogt-Roberts (“The Kings of Summer”) that tells the thrilling story of a diverse team of scientists, soldiers and adventurers uniting to explore a legendary, unmapped island in the Pacific that’s as dangerous as it is beautiful. Quickly and unexpectedly cut off from everything they know, the team finds themselves in the domain of the mighty Kong (now 100 feet tall!), triggering the ultimate battle between man and nature.

Without warning, their mission of discovery becomes one of pure survival, but only if they can manage to escape this primeval Eden where humanity clearly does not belong.

Vogt-Roberts directs from a story by John Gatins and Don Gilroy and a screenplay by Gilroy and Max Bornstein. But even with so many experienced hands shaping the core story, the less than gripping plot is a disappointment — plus the fact that the big ape bears no resemblance to his titular predecessors. (Where is Andy Serkis now that we need him?) 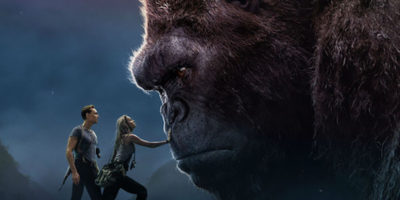 It must be admitted the 3D is effective and surprisingly immersive. The extra dimension, and great sound design make the movie seem a tad better than it really is. The large cast (Tom Hiddleston, John Goodman, John C. Reilly, Samuel L. Jackson and Brie Larson) are all fine, too bad the lovely Larson didn’t get a lot more screen time in a thankless part as a photo-journalist and just possibly Kong’s potential “girlfriend.”

The movie was shot across three continents over six months, capturing the primordial environments on Oahu, Hawaii, Australia’s Gold Coast and Vietnam, filming on some locations that have never before been seen in a feature film.