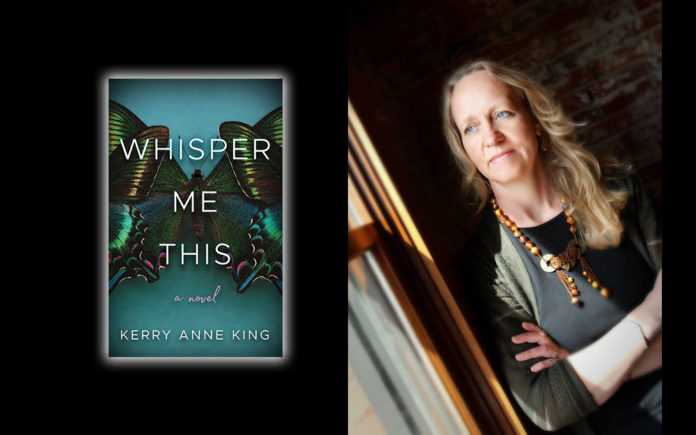 —–
Whisper Me This
by Kerry Anne King – Fiction
—–

The story begins with Maisey, a little girl playing with her imaginary friend Marley.  Marley is bossy, brave and filled with mischief, always getting Maisey into trouble.  When her mom Leah, finds Maisey talking and playing with “Marley,” she violently punishes her daughter warning her to never “imagine” Marley again.

Now an adult with a child of her own, Maisey is adrift.  Elle, Maisey’s daughter, is a precocious and capable twelve-year-old who mothers her mother, takes charge and makes sure things get done right.

Maisey never married Elle’s father.  He is a lawyer, married with a new baby and lives nearby. Maisey is the custodial parent, but allows Elle’s dad power and influence in both of their lives, fearing he could challenge her competency as a mother and gain full custody.

When Maisey gets a call that Leah is in the hospital and her father may be arrested for spousal abuse, Maisey goes back to her small town and childhood home with Elle.  Once there, Maisey discovers her mother is in a coma and will never wake, and her father is so confused he can no longer live by himself.

Leah’s medical “advanced directives” which describe her final wishes cannot be found.  Maisey searches the house only to find a mess of paperwork — some shredded while others burned in the fireplace.  Following Leah’s orders, her father has tried to destroy documents regarding Leah’s past.

Literally putting pieces together, Maisey finds clues that her sweet, kind and loving dad is not her birth father, and that her mother had created a new life for herself, and Maisey is a twin!

With the help of Elle, and Tony, a handsome fireman, Maisey is able to put a picture together of the woman who was her mother, find the sibling she always wanted and discover her own strength and truth.

I got really caught up in Maisey’s story and was quickly rooting for her, Elle and Tony.  At first, I thought Maisey weak and ineffectual but as the story unfolded I got to know her delicate nature and the way her childhood shaped her.  She never felt good enough and she could never please her mother.

Maisey is smart, sensitive and a good mother to Elle always encouraging and respecting her daughter’s energy and point of view.  Now, nearly forty years old, Maisey has clarity about her upbringing, her challenging relationship with her mother, and why she refused to marry Elle’s father.

The story is gripping as Leah’s abusive past, and the terrible sacrifice she was forced to make, is revealed.

Author King does a beautiful job delving into the main characters’ backstories.  She delivers a portrait of generational abuse both physical and mental.  She exposes the difficulty of stopping domestic violence, protecting children and finding freedom.

King shows the reader how spousal and child abuse is a poison that spreads throughout families and can continue to perpetuate through generations.  It takes a brave and conscious decision to stop the cycle of abuse.

The relationship between Tony and Maisey is organic and sincere as they find common ground other than going to the same high school.

This story is not just about the effects of abuse on women, but men as well, as we get to know Tony, his past with his family and father.  However, except for Tony, the rest of the family is quite well adjusted considering the intense trauma they collectively shared.  I wish the author took a little time regarding their ongoing path toward healing from the horror of an abusive alcoholic father.

Maisey is heroic as she confronts her weaknesses and stands up for what is right for her daughter and herself.

Finally, Maisey understands her mother. Noting: Leah gathered “…the strength to break free from indoctrination and violence to create a reality in which her daughters and her granddaughter stand free and independent.”