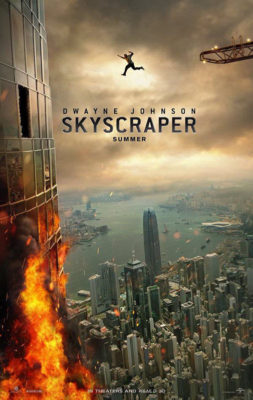 In director Rawson Marshall Thurber’s derivative and sometimes preposterous but fun film, former FBI Hostage Rescue Team leader and disabled U.S. war veteran Will Ford (Dwayne Johnson) now assesses security for skyscrapers. He’s on assignment in China when he finds The Pearl, the largest – and tallest — building in the world suddenly ablaze, and he’s being blamed for it!

Suddenly Will’s a wanted man on the run who must find those responsible, clear his name and somehow rescue his family, who are trapped inside the building, above the fire line. That’s a lot to ask of a man with a prosthetic leg.

It’s nice to see Neve Campbell as the hero’s smart, strong-willed wife and loving mother of their two kids. She elevates every scene she’s in. 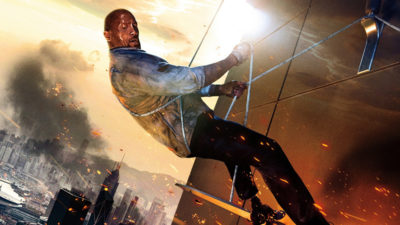 Johnson is an astonishing action hero, seemingly custom-made for the movies! Always a winning, charismatic presence Johnson has more big-screen action adventures in the pipe-line including a Jumanji sequel and Jungle Cruise.

I enjoyed this mindless, visceral ride even when it defied logic and the laws of physics.

If you’re looking for the perfect movie to enjoy while escaping the blazing heat in a cool theater. This is it. It’s not great but guaranteed satisfying, silly fun. And there’s nothing wrong with that. See it at Mary Pickford’s D’Place Entertainment and enjoy some of their terrific home-made ice cream. 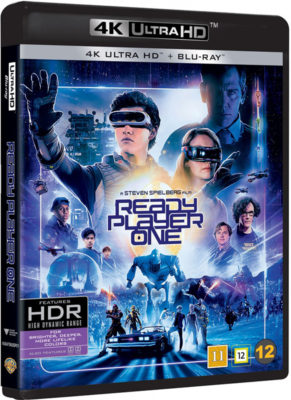 Step into Steven Spielberg’s immersive virtual universe based on Ernest Cline’s bestseller of the same name from a screenplay adaptation by Zak Penn (and Cline). CGI heavy film is intermittently mind-numbing and an assault on one’s optic nerves. But even so, it has already become a global hit for reasons that are hard to determine. Is it Spielberg’s name above the title? Or is there really a huge audience of middle-aged boy-men for 80’s nostalgia centered on older, mostly mediocre video games?????

In the year 2045 (getting awfully close to the time of the Blade Runner reboot but there’s no overlap in theme other than the world is a harsh place.  The only time Wade Watts (Tye Sheridan) truly feels alive is when he escapes to OASIS, a virtual universe where most of humanity spend their days. In the OASIS, you can go anywhere, do anything, be anyone – the only limits are your imagination. 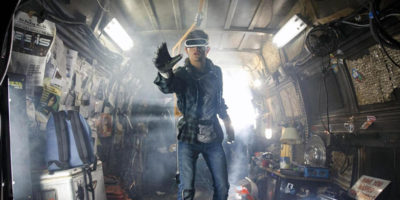 The OASIS was created by the brillliant and eccentric James Halliday (Mark Rylance), who left his immense fortune and total conytol of the OASIS to the winner of a three-part contest he designed to find a worthy heir. When wade conquer the first challenge of the reality bending treasure hunt, he and his friends – known as the High Five – are hurled into a fantastical universe of unexpected revelations and danger to save the OASIS and their “real” world.  The generous extras are fascination from a creative and technological perspective but add nothing to the lengthy movie experience which can be tedious and pretty meaningless.

The idea of a populace seeking alternate and artificial realties to their own detriment is a meaty and relevant meta-theme that is hugely relevant but was not touched upon .  Brainstorm did it better and that was decades ago.  Warner Bros. Home Ent.