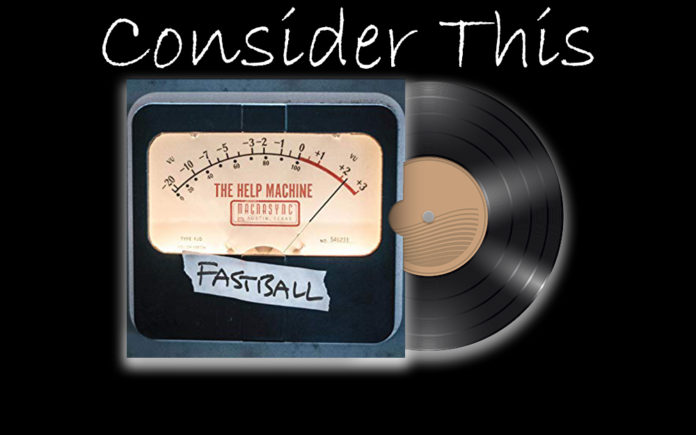 Forty years ago, Punk music seemed too problematic for mainstream radio, so someone coined the term New Wave. The phrase gained traction and became a catch-all for everyone from Adam & The Ants, Blondie and Elvis Costello, to the Go-Go’s and Billy Idol, to Squeeze the Talking Heads and XTC. A decade later the appellation Alternative Music came into vogue. It was an alternative to Top 40 and it easily encompassed the burgeoning Grunge and Riot Grrrl scenes, as well as Britpop. This made it easier for Jane’s Addiction, L7, Nirvana, Oasis, Blur, Offspring Pearl Jam and Liz Phair to get airtime on MTV and mainstream radio.

As the 21st century approached, the genre became watered down by generic crap like Collective Soul and Eve 6. Bands like Creed and Days Of The New clumsily drafted off the angst of Pearl Jam and Soundgarden, sans nuance. Both Matchbox 20 and Train came off like a poor man’s Counting Crows. Then came aggro, testosterone-fueled, slightly scatological, um, music by bands like Korn and Limp Bizkit, and in the immortal words of the Pretenders, “Lust turned to anger…”

But all was not lost, wading into this sea of mediocrity was Fastball, a band that harnessed the crisp wordplay of Costello, the angular attitude of the Talking Heads as well as the supple songcraft of the Beatles. All these ingredients made their second album, All The Pain Money Can Buy a genuine hit.

Bassist Tony Scalzo began playing music at age 14 and cycled through a series of bands in Orange County before achieving local success as part of The Goods. Looking for new challenges, he relocated to Austin Texas in 1994, just ahead of his 30th birthday. Following a false start in the Beaver Nelson Band, he connected with Miles Zuniga and Joey Shuffield. Miles, a native of Laredo, Texas had been drawn to the thriving music scene in Austin. Joey had grown up in Austin, but life in the musical fast lane of Los Angeles beckoned briefly. Both had played in the band, Big Car, but decided pretty quickly to join forces with Tony.

Originally, the trio was known as Star 69, then Magneto, then Magneto U.S.A., which evolved into Ed Clark’s Business Bible, then Starchy, before they settled on Fastball. Working their way through Austin’s fertile club scene, they cultivated a passionate fan base and created a bit of a buzz. Rather quickly, they signed with Hollywood Records, an imprint from the Disney Music Group. Their debut, Make Your Momma Proud was released in 1996, but somehow got lost in the shuffle.

The three-piece had better luck with their sophomore effort, “All That Money Can Buy, which arrived in 1998. Produced by Julian Raymond and recorded at historic A&M Studios in Hollywood, the album was quickly embraced by fans and critics alike. When the first single, “The Way” went into heavy rotation on MTV and crossed over to mainstream radio, the guys could finally quit their day jobs. Soon after, they were performing on “The Tonight Show” and “Conan O’Brien,” touring with popular acts like Everclear and Marcy’s Playground. They earned a spot on the final H.O.R.D.E. tour. Two other singles, “Fire Escape” and “Out Of My Head” also hit the Top 40. In turn, Fastball was nominated for two Grammy Awards.

With great success, great excess typically follows. The guys in Fastball were never caught on video steering boats with their, um appendages, they never violated women with Mud Sharks, dated underage groupies or ran over their chauffeurs. They basically put their heads down on got to work. They maintained a devoted fan base by making quality records. Their third album, The Harsh Light Of Day was released in late 2000, it was their final album for Hollywood Records. They jumped to the Rykodisc label for 2004’s Keep Your Wig On. Five years later Little White Lies was released independently, as was their sixth studio effort, 2017’s Step Into Light.

Perhaps the band has navigated a quarter of a century together by making time for solo projects, and outside collaborations, this methodology has managed to keep the music fresh and urgent. Recently Fastball reached out to the legendary Steve Berlin and persuaded him to produce their new album, “The Help Machine.”

Steve Berlin has been a fixture of the L.A. music scene for nearly 40 years. He first made his bones blowing saxophone for seminal Roots Rockers, The Blasters. He seamlessly joined Latin Roots Rock alchemists Los Lobos in 1984, an alliance that has lasted for 35 years. In between his duties with the Wolves, he has served as a producer for everyone from the Beat Farmers, John Wesley Harding, Rickie Lee Jones, Angelique Kidjo to Leftover Salmon and Buckwheat Zydeco.

The album opens tentatively with “Friend Or Foe.” Thrumming bass lines and searing guitar connect over a percolating rhythm; the melody roams the wide open spaces. Contemplative and yearning, the lyrics plumb the depth of the eternal disconnect of a long distance relationship; “I see the stars up in the sky, I wish I was with you tonight, so far away, 10,000 miles.”

As with previous albums, Tony and Miles divide songwriting duties, each handling lead vocals on their own compositions. Miles has the slight edge here, with seven songs, Tony contributes four. Following Miles’ timorous “Friend Or Foe,” Tony’s “White Collar” feels positively scathing by comparison. The melody and instrumentation are stately and sophisticated, accented by ornate piano notes, burnished guitars, shadowy bass and billowy organ. But biting lyrics offer a withering rebuke of a captain of industry’s moral ambiguity; “Sunshine overdose, body looks good but your brain is toast, driving up and down the Pacific coast, Grand Wizard of the weenie roast/Sunset and Beverly Drive, bees don’t fly too far from the hive, you’ll get ten years but you’ll only serve five, get religion and say you’re sorry.”

The best tracks here are by turns spiky, sarcastic, surprising, sincere and self-effacing. Miles’ take on spirituality and salvation are bookended by two tracks, “Holding The Devil’s Hand” and “Redeemed.” On the former, a jittery tribal tattoo runs counter to sleek guitars and elastic bass. The caffeinated melody and Noir-ish ambiance echo the classic ‘80s track “Eyes Of A Stranger,” by The Payolas. The lyrics cut deep, questioning the compromises we make and the shortcuts we take; “There’s a voice in your head when you’re trying to sleep, cos you gotta live with the secrets you keep/You’re damned if you do and damned if you don’t, and you should walk away, but I know you won’t.”

The latter takes a swipe at organized religion and the need of the recently reformed to convert every sinner in their path. “You say that you’ve been saved, good for you, now that you’ve been saved, you want to save me too/I’m not the one you should be worried about, keep your house clean, redeem, redeem yourself.” The playful melody, anchored by junky percussion, see-saw guitars and brittle bass lines, takes a bit of the sting out of this blunt message.

There’s a lithe efficacy to Tony’s “Doesn’t It Make You Feel Small.” The melody is fueled by a brawny backbeat, zippy guitar riffs, ricocheting bass runs and taut keys. Between the whiplash instrumentation, lyrics tackle feelings of middle age malaise; “The picture on the bathroom mirror, cracked and faded with age tells the same old story, maybe you should turn the page.” The arrangement is buoyant and expansive even as the lyrics wallow in the mire.

The melody of “The Girl You Pretended To Be” is tethered to a Texas Two-Step. Guitars twist and twang over roustabout bass. The lyrics sketch out a “Freaky Friday” scenario, catching a poseur in her tracks, however, the script is flipped and Tony casually admits he’ll take illusion over authenticity; “Now that I’ve caught you, you’ve got nothing to say, I’ve proven your guilt undeniably, if there’s one thing I can say, it’s I’d much rather stay with the girl you pretended to be.”

Meanwhile, “All Gone Fuzzy” spins the sad-sack saga of a paranoid (former?) radical who would rather relive the revolution in his mind than go buy some groceries. Powered by a hopscotching big beat, wobbly keys, breakneck guitars and wiry bass, the arrangement accelerates into the curve just in time for the anthemic (neurotic) chorus; “Somebody’s knocking on my door, while I pretend to be out of town/I peak through the curtains and watch as they walk away.” The neuroses is slightly undercut by the kinetic guitar solo and the fact that the whole song is bathed in a candy-colored glow. It gathers speed at the break before hurtling to a close.

Other interesting cuts include the moody “I Go South,” which vibes the same sexy gravitas as Bill Withers’ “Ain’t No Sunshine.” Then there’s the muscular confrontation of “Surprise, Surprise” which shares some musical DNA with Golden Earring’s “Twilight Zone.” Finally, there’s soul-searching grace of the title-track, which relies on whoosh-y keys, creamy choir boy harmonies, sidewinding guitars and an authoritative beat. Here, Miles quietly asserts, “I don’t want to spend my life chasing money.”

The album closes with “Never Say Never,” a South Of The Border ballad that blends courtly Spanish guitar, downcast piano, lush organ notes, agile bass and a Tex-Mex tick-tock beat. Here, Miles concedes he’s curbed his excessive lifestyle; “I guess I finally settled down at last, all that smoking and drinking, that’s all in the past…” but he hasn’t conquered his addiction to love; “I’ll never do another line of cocaine, and I’m never going back to Laredo again/Never do the crazy things that I used to, but I’ll never say never when it comes to you.” Somewhere, Marty Robbins is smiling.

Steve Berlin encouraged the guys to break out of their comfort zones a bit, so Tony almost completely abdicated bass duties to Bruce Hughes, and primarily played keys. Other pals who pitched in include Charlie Sexton and Kevin McKinney on guitar. John Chipman on drums, Gordy Quist on backing vocals and Andy Steck on drums, Wurlitzer, Juno synth, Ebow and piano.

25 years on, and this Texas trio continues to strike a balance between sly spontaneity and impeccable craftsmanship. Happily, their fan base is now multi-generational. The most astonishing thing about Fastball is their sound never seems dated or obsolete. There’s effervescence and an immediacy to the music found on the “The Help Machine.” In 1998 they hit the Big Leagues, and in the ensuing years, their popularity has levelled off. These days, they’ve settled into a silver age and that seems to suit them just fine.