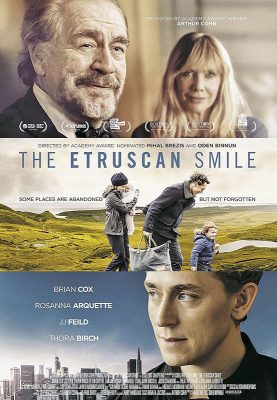 Originally titled “Rory’s Way, showcases acclaimed actor Brian Cox as Rory MacNeil, a rugged old Scotsman who reluctantly leaves his beloved isolated Hebridian Island and travels to San Francisco to seek medical treatment and is diagnosed with stage four prostate cancer.  Moving in with his estranged son, Rory’s life will be transformed just when he expects it least, through a newly found love for his baby grandson.

Based on the bestselling book La Sonrisa Etrusca by Louis Sampedro, the beautifully shot film story is transposed to Scotland and the United States.

The title refers to the famous terra cotta statues that bear an enigmatic smile even in their afterlife and instill hope towards the idea of a happy death.

This quiet film about generational divides is full of pain, love, life and death.  But mostly and finally, it’s about forgiveness.   As predictable as it is, this heartwarming story is worth a visit, if for nothing more than to savor Brian Cox’s winning performance.   Recommended. 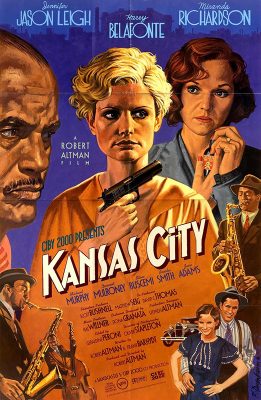 Returning to the city of his birth for inspiration, maverick director Robert Altman helms an evocative, bullet-riddled tribute to the music and movies of his youth in Kansas City, a depression era gangster flick as only he could make one.  Blondie O’hara (Jennifer Jason Leigh) resorts to desperate measures when her low-level hood husband Johnny (Dermot Mulroney) gets caught trying to steal from Seldom Seen (Harry Belafonte), a local crime boss operating out of a jazz joint The Hey-Hey Club.  Out on a limb, Blondie kidnaps laudanum-addled socialite Carolyn (Miranda Richardson), hoping her influential policeman husband can pull the right strings and get Johnny out of Seldom Seen’s clutches.

Nominated for the Palme d’Or at Cannes and featuring a remarkable soundtrack performed live by some of the best players in contemporary jazz, one Altman’s most underrated and idiosyncratic films finally makes its long-awaited 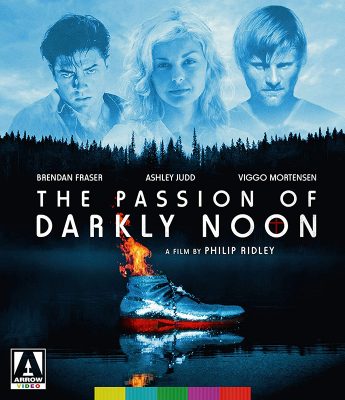 Described by critic Mark Kermode as an ”extraordinary filmmaker and one of the UK’s most imaginative talents,” visionary British director Philip Ridley followed his sensational debut The Reflecting Skin with another surreal excursion into the dark hart of the “American Dream.”

Darkly Noon (Brendan Fraser) is the sole survivor of a military style attack on an isolated religious community that reminded me of Ruby Ridge.

Stumbling through a forest in a daze, he is rescued by the free spirit and enigmatic Callie (Ashley Judd).  Darkly finds himself feeling strange new desires for Callie as she nurses him back to health … only to watch her jump into the arms of her returning mute lover Clay (Viggo Mortensen).  Lost in the woods with only his fundamentalist upbringing to make sense of his unrequited passions.  Darkly soon descends into an explosive and lethal rage.

Ridley’s talent for spellbinding, hallucinogenic dream imagery is on full display on a glittering new transfer of his most formally inventive and electrifying film.

The mesmerizing soundtrack includes two songs co-written by Ridley.  “Look What You’ve done (To My Skin)” performed by Gavin Friday and “Who Will Love Me Now?” performed by PJ Harvey.  Blu-ray.  Arrow Films.

Also new on Blu-ray are two extraordinary, must see films previously reviewed on these pages when they were released theatrically. 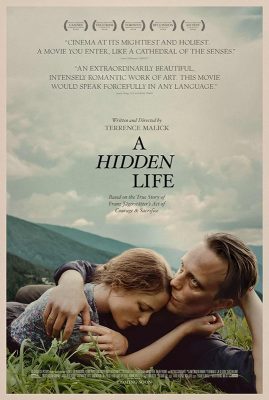 From writer-director Terrence Malick comes this beautifully crafted and timeless story based real events about an unsung hero, Franz Jaggerstatter (August Diehl), an Austrian farmer who refused to fight for the Nazis during World War II.  A truly great film that’s a about resisting evil even when no one, or hardly anyone, knows it.