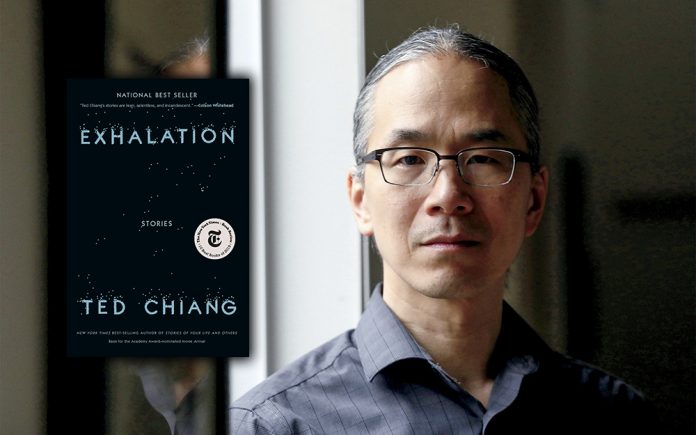 As the global pandemic spreads into our communities, human behavior is neither surprising nor unexpected.  It is clear people are very much alike all over the world.  In Ted Chiang’s science fiction short story collection Exhalation (Alfred A. Knopf, 355 pages) the future may be different but people remain the same.

Chiang’s Exhalation collection has nine stories, of which seven were previously published in periodicals and e-zines.  The film “Arrival” starring Amy Adams and Jeremy Renner was base on his 1998 short story “Story of Your Life.”

The first story is “The Merchant and the Alchemist’s Gate.” It is set in a medieval Muslim market place where the characters explore the value of time travel and what it is like to talk and commune with your younger self.

In the title story “Exhalation” an anatomist narrates his experience as he takes apart his own “cyber body” to examine consciousness, time and his “thin” memories.

The story “What’s Expected of Us” features a common device called the “Predictor.”  Those who over use the “Predictor” may suffer from “Akinetic Mutism” which is akin to a walking coma.  As the popularity of the device spreads, free will is only an illusion.

“The Lifecycle of Software Objects” is about a young woman who gets a job as a zoologist in a virtual world.  It is her job to create “digients” – digital organisms in a world that is all AI driven and everyone has an online avatar.

“Darcy’s Patent Automatic Nanny” tells the story of how a robot may do a better job at raising children, but the fear of machines replacing humans may keep the robot “Nanny” off the market.

In “The Truth of Fact, the Truth of Feeling,” new parents want to make sure their child grows up with real books, and that she can learn to read and write with actual pen and paper.  But the digital world no longer requires those skills.

A parrot narrates “The Great Silence.”  The bird talks about how human beings are searching for non-human life in outer space but have failed to listen to the life of those nonhumans who inhabit the earth.

“Omphalos” is told in prayers.  The protagonist is a “Philologist” — there are no longer scientists.  She experiences a crisis in faith as new evidence challenges her belief system.

“Anxiety Is the Dizziness of Freedom” explores our “paraselves” through the use of an object called “Prism” – Plaga Interworld Signaling Mechanism.   Like a fortuneteller, people can visit divergent timelines and look at the results of their alt-choices.

This is a fun collection of stories.  The author is brilliant as he creates a future that is both recognizable and alien.  His terminology and science knowledge makes sense and the future he postulates is relatable.

My favorite story in the collection is “The Great Silence,” which is told by the parrot.  As human beings search for intelligent life in the universe they neglect to listen to the intelligence of the creatures on this planet.  The narrator shares the “Fermi Paradox” a human explanation that there is no sign of intelligent life other than on this earth, yet they cannot hear the wild life speaking to them everyday.  The bird concludes his narration with a simple message to humans – “I love you” – which, of course, goes unheard.

The collection as a whole offers some very astute insight as our world changes and races faster and faster into the future.  It is something to consider how the next generation will learn and what their lives will look like when they seek employment

The Robot nanny story made me understand how easily children could prefer the robot to real people as it comes with less stress and judgment.   Yet, as the author points out, at the same time it may be crippling – or cause “psychosocial dwarfism.”

I was surprised how in the future religion was still significant in the “Ompholos” story.  This is a brilliant conceit by the author.  As blatant as it is, the story has subthemes and nuances that make us reconsider both why we believe in God and how God can still exist in the future.  The language the author uses is slightly different from today’s, but is understandable.  I also appreciated that scientists no longer exist, but instead are called “Philologists” (language experts) because religious fanaticism still has a tight grip on society’s thinking.

I enjoyed these thought provoking stories.  Over all, Exhalation is not about the future or the past, but about human behavior.  That seems to be something that never changes.  The big question is: How do we change our thinking and modify our behavior?