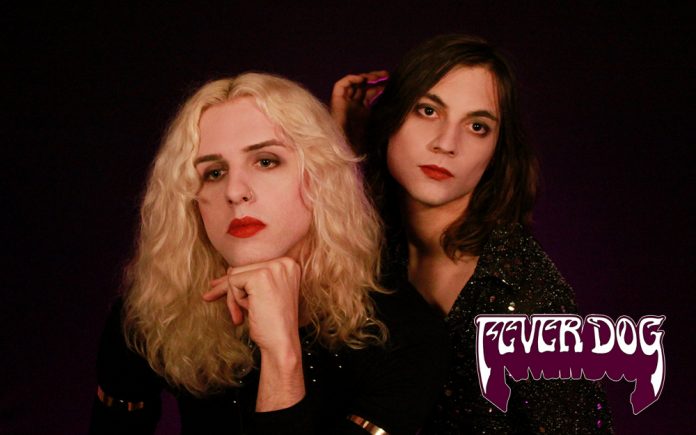 “Formed in 2012 by three longtime friends, Feverdog began life as a lo-fidelity garage outfit. Collectively drawing inspiration from their influences, guitarist Danny Graham, drummer Joshua Adams, and bassist Nathaniel Wood composed music in the vein of The Hellacopters, The Stooges, Turbonegro and The Supersuckers.”

Since then, Feverdog has released a multitude of tracks, collaborated with other local artists, toured throughout Europe, and changed their lineup, all while evolving their sound to the incarnation in which they currently perform. Between the theatrics of their look and the refinement of their music, Feverdog always brings a magical vibe to every performance and audiences eat it up.

Now that live shows are becoming a thing again, I was lucky enough to be able to catch these guys performing twice within the past month. First at a private event in Sky Valley, and more recently at Dale’s Records in Palm Desert, where they played for a youthful crowd of music lovers who were starving for a real-life, killer, rock show and left satisfied. I chatted with vocalist and lead guitarist Danny Graham about the current state and future plans for Feverdog.

Graham: “Our current lineup consists of myself on lead guitar and vocals, Joshua Adams on drums, Quanah Lienau on guitar and Jackson Fischer on bass. All of the guys do some singing, depending on the song. It was Joshua and I who were working on writing and recording the album over the years and in 2019 formed the new band. We played a few shows and released a few singles up until 2020 when the pandemic hit. Joshua and I took advantage of the time by finishing the album and looking for new band members to bring the album to life. We added Quanah, who we already knew and Jaxon who seemed to be a good fit. We started rehearsing and playing shows as the opportunities to do so opened up.”

CVW: So now that opportunities for musicians are starting to present themselves once again, what are your goals as a band in the near future?

Graham: “Our album was actually sent out to press last January. We are planning on releasing it around September of this year. Currently, our biggest goal is to tour the US and Europe in support of the new record.”

Check out Feverdog on all major platforms and keep an eye out for more on them in upcoming issues of CV Weekly.