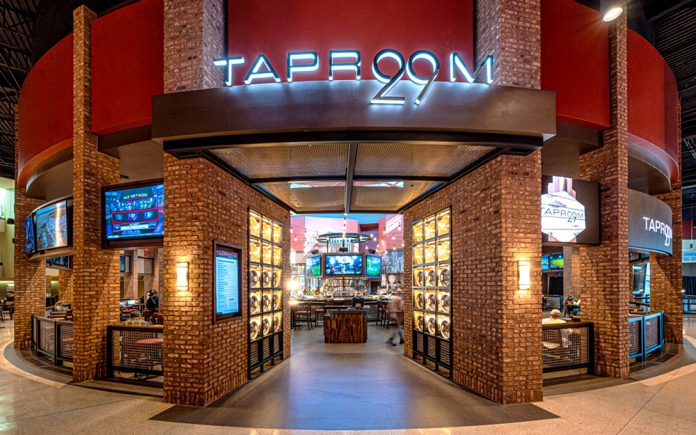 When Covid first reared its ugly head, the Twentynine Palms Band of Mission Indians quickly realized that their vaunted Capitata Buffet in Spotlight29 Casino might never return. Even if it could eventually rebound, who amongst the brain trust could even begin to conceive how the buffet of the future might look?

The casino moved quickly to redesign the space and yours truly signed on as a consultant for the Brewery and Taproom that were, in theory, to open before the end of 2020. It was an ambitious project which would need a large number of suppliers and contractors to come together in a significant space and in a very short window of opportunity. It didn’t help that much of the casino was already in the middle of a major remodel, yet the project ran on schedule from late April through December. 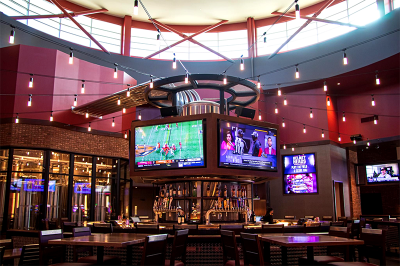 Fast forward to December 23, 2020 and the soft-opening of Taproom 29 came to fruition. It’s a multi-dimensional, circular room giving casino guests and diners a beautiful brick, steel, and wood environment which is both comfortable and stimulating in a smoke-free environment. The circular center bar features ample seating and an innovative wrap-around ice bar in an effort to keep drinks in the proper temperature range from beginning to end.

Tucked inside the Taproom across from the beautiful brick oven pizza station is a gleaming new brewery. Designed and installed by Portland Kettle Works, the Oregon company boasts over 10 years’ experience with over 300 craft breweries and taprooms under their belt, she shines like a newly minted coin. Christened 29 Brews, the new brewing system features 100% American manufactured stainless steel and workmanship. While the name 29 Brews is quite fitting for the property, I still feel that ‘Ship in a Bottle Brewing’ would have been much more apropos considering its goldfish-bowl appearance.

But this is a beer column, so let us get to talking about what brings us all together. Currently, 29 Brews is laser-focused on providing four core beers before expanding the house beer portfolio. The top-selling beer in Taproom 29 is a beautiful Golden Ale christened Chairman’s Blonde, named after the Tribal Chairman. As a wily veteran in this business, it seemed like a good career move to name the best seller in honor of the dude who puts his name on the bottom of my paycheck.

I feel Chairman’s Blonde is a nice representation of the brewers art. Simple in design and execution, it is literally what we refer to as a SMaSH beer in that it uses a single malted barley, a single hop, water, and yeast. It’s a bull-bodied beer that tastes like, well, beer.  At 5.2% Alcohol by Volume (ABV), it’s crisp, clean, and crushable without filling one up unnecessarily. It should be mentioned at this point that one of my brewing commandments is, “Thou shalt be able to have three”.

Next in the lineup is Rez Rage Red; an American twist on an ancient Irish classic. Despite its deep crimson color, Rez Rage is a good reminder that just because a brew isn’t golden, it need not be overly heavy in flavor and finish. It checks in at a responsible 6.1% ABV and is a malt-lovers delight. Four specialty malts combine with the base two-row variety to create a beer with a nice caramel backbone while boasting a background hint of both roastiness and toastiness. Hops are kept to a minimum, acting as a counter-balance to the inherent sweetness of the Red style. 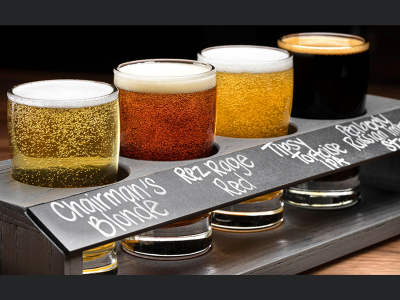 One simply cannot open a brewery in Southern California without offering an India Pale Ale to guests, and I do believe that our Tipsy Tortoise IPA is an excellent representation of this constantly evolving style. Named as a mascot for our sister property, Tortoise Rock Casino in 29 Palms, this West Coast style IPA boasts a bold nose of grapefruit and orange blossom with a backdrop not unlike walking through a pine forest after a gentle rain. The 7.2% ABV adds to a satisfying mouthfeel and is considered moderate in today’s world of big alcohol IPA offerings.

Bringing up the end of the tasting flight is Peabody’s Russian Imperial Stout (RIS). This style rose to prominence in the late 1700’s when brewers in Britain began to ship the stronger version of London Stout to the Empress Catherine the Great in European Russia. This beer is so dark that I fear it actually absorbs light and is filled with chocolatey goodness. By Russian Imperial Stout standards, I’ve shown restraint in keeping this decadent elixir at 8.2% ABV as most commercial examples clock in at 10% ABV or higher. 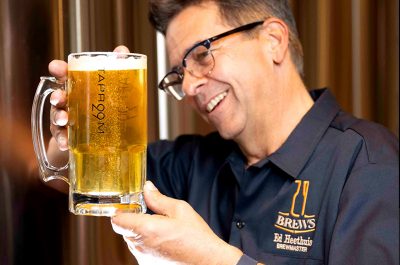 In addition to our house beers, I rotate 15 of our 29 total tap handles on a regular basis, offering both beer enthusiasts and casual beer fans with world-class options which are always changing. My almost 29 years in beer have allowed me to forge relationships with some of the best brewers, both nationwide and in Southern California. As a result, Taproom 29 has the luxury of pouring an eclectic portfolio of constantly changing suds; often changing as many as six different beers in any given week.

Mark your calendar for Wednesday, July 15th for our inaugural Chef/Brewmaster dinner in Taproom 29. I have teamed up with our Executive Chef Josh Hill to collaborate on a four-course, off-menu dinner of epic proportions. Chef Josh brings over 20 years of culinary experience to the Taproom; his most recent stint was as the Executive Chef at The Henry in Beverly Hills. The native of Hawaii has kitchened across America with notable stops in New York, Boston, and Minneapolis. He is promising us delicacies such as Borracho Brisket and Lobster Corn Fritters, all paired with a combination of beers from 29 Brews and the world. First seating is at 6:00pm and the second seating occurs at 8:00. Reservations may be made by calling the Taproom Host desk at 760-775-2880. I hope to see you there!

(When Ed Heethuis isn’t brewing at Spotlight 29 Casino for 29 Brews, you will find the Certified Cicerone® / Brewmaster out on his road bike, teaching himself Taxidermy, or talking beer with the patrons at Taproom 29. He may be reached at: heethuis.ed@gmail.com or wherever beer may be found in the wild.)