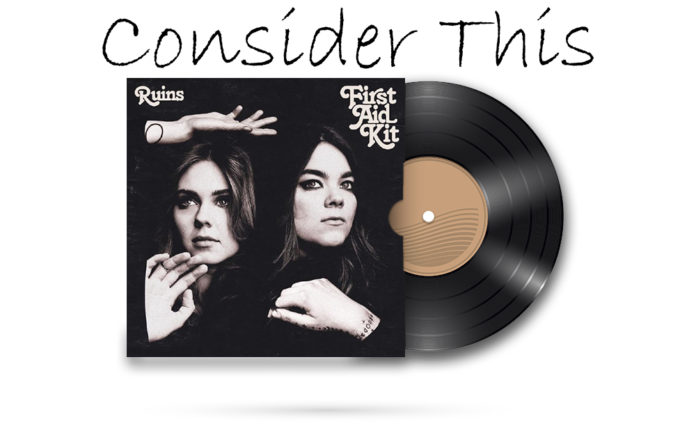 Listening to the high lonesome sound of First Aid Kit conjures up images of wide open prairies and smoke-filled Honky Tonks. Their Country Western verisimilitude is so acute that it’s surprising to realize their all-American sound was incubated in Enskede, a suburb of Stockholm, Sweden.

Sisters Johanna and Klara Soderberg have music in their blood. Their dad, Benkt, played guitar and bass in Lolita Pop, from 1979 to 1989. The five-piece was heavily influenced by American proto-Punk from like Iggy Pop and Television. Following his music career, Benkt became a teacher, but he continued to record music on his own in his home studio.

Johanna was born in 1990, Klara arrived in 1993. The sisters were musical from the start, using jump ropes for pretend microphones and belting out songs by Judy Garland and Billie Holiday. Klara actually wrote her first song at age six. The girls attended an International school and quickly became infatuated with American Rock N’ Roll.

In 2005, at age 12, friends introduced Klara to the music of Bright Eyes, and she was immediately smitten. She was so completely charmed by Conor Oberst’s sound that she began to dig deeper and explore his musical inspirations. She backtracked through Bob Dylan, Gram Parsons, Emmylou Harris, Johnny Cash all the way back to the Carter Family. Although Johanna was equally besotted by German Techno music, her epiphany came after watching the Coen Brothers’ film, “O Brother, Where Art Thou.” The rural, early 20th century Music on the soundtrack inspired her to begin harmonizing with Klara. The pair began writing their own songs and busking on street corners. They chose their band name by randomly flipping through the dictionary.

By 2007 they were uploading original songs to Myspace. Their music came to the attention of local Synth-Pop duo The Knife, who signed First Aid Kit to their own label, Rabid Records. Their contract gave the sisters complete control of their music and cover art. Their debut EP, Drunken Trees, collected all their Myspace songs and was released in 2008.

Although the duo was still attending school, they managed to tour and perform on the weekends. Their cover of the Fleet Foxes’ “Tiger Mountain Peasant Song” popped up on Youtube and caught the attention of the beardy Folk band’s front man, Robin Peckhold. He posted it on the band’s website and it received so many hits it nearly crashed the site.

Receiving Fleet Foxes’ stamp of approval gave the sisters instant international cred. Johanna promptly quit high school, (Klara hadn’t even begun yet), and they embarked on real tour. Their dad left his teaching gig to accompany the girls as their bassist. In late 2008, First Aid Kit leap-frogged from Rabid to Wichita Records, (home to Bloc Party, My Morning Jacket and the Yeah, Yeah, Yeahs). Their first full-length album, The Big Black & The Blue arrived in 2010.

During their first U.S. tour, the girls managed to get their album into the hands of Klara’s hero, Conor Oberst. The Bright Eyes visionary was so impressed he shared his new discovery with some famous friends. Jack White invited the band to record a song at his Third Man recording studio. Bright Eyes guitarist Mike Mogis assumed production chores for the duo’s sophomore release, The Lion’s Roar.

That record arrived in early 2012, and quickly created a bit of a buzz. Critical acclaim was immediate and nearly unanimous. The album shot to #1 on the Swedish charts and #35 in Great Britain. Propelled by the irresistible first Single, “Emmylou,” (“I’ll be your Emmylou and I’ll be your June If you’ll be my Gram Parsons and my Johnny too”), it reached #65 on the U.S. charts. Adventurous radio stations like KCRW in Los Angeles gave the song massive exposure that led to a deal with Columbia Records.

Their third record, Stay Gold, also produced by Mogis, was released in June 2014. Expansive, yet richly nuanced, it hit #2 and #8, respectively, on Billboard’s Folk and Rock charts. But the treadmill of writing-recording-touring (lather-rinse-repeat), was beginning to take its toll. By 2015 the girls were emotionally drained.

Barely 22 and 25, Klara and Johanna had missed out on the rites and rituals of late adolescence. So, the sisters took a much-needed break, retreating from the music business. It was a musical “divorce” of sorts. Johanna returned to Sweden, while Klara settled in Manchester, England to spend time with her fiancée. Unfortunately, that relationship imploded.

When they reconvened in 2016, Klara already had the skeletons of several songs, each one heavily influenced by her recent break-up. In the past the sisters’ songwriting method was a 50/50 collaborative process. This time Johanna recognized that her role was as more of an editor.

Some of the songs were fleshed out in a remote cabin in Joshua Tree, some in the smoggy sunshine of L.A. Once that was finished, they recruited producer Tucker Martine, (Laura Veirs, Decemberists, Neko Case, Modest Mouse and My Morning Jacket), and decamped to his Portland, Oregon recording studio. The result is their fourth long-player, entitled Ruins.

The album shudders to life with “Rebel Heart.” The tune was first conceived in Joshua Tree, so it’s wholly apropos that it feels like a sandblasted, kissin’ cousin to Phil Spector’s epochal “Be My Baby.” Fluttery harpsichord connects with lonesome pedal steel and a rustic Wall Of Sound. The lyrics carve up the remains of her relationship, honing in on some hard truths; “I don’t know what it is that makes me run, that makes me want to shatter everything that I’ve done/Why do I keep dreaming of you, is it all because of my rebel heart?” The sisters’ keening harmonies underscore the track’s epic ache. Just as the song seems to wind down, it suddenly accelerates, as urgent eBow guitar and plangent piano wrap around an extended instrumental coda.

For three numbers, Klara and Johanna wear their eclectic influences on their sleeves. “Fireworks” opens tentatively, layering searching piano chords and reverb-drenched guitar over a martial cadence. Under the sing-songy, lullaby melody (that echoes the Everly Brothers as well as the sunny sad-sackery of Skeeter Davis’ “The End Of The World”), lurks a theme of self-flagellation. “Why do I do this to myself, every time I know the way it ends/Before it’s even begun, I am the only one at the finish line.”

Somehow, on “Distant Star,” they harness the fire and brimstone Country Rock of the Louvin Brothers, but give it a Psychedelic twist. Strummy acoustic guitar and a loping rhythm are nearly elbowed out of the frame by shimmery melodica and spidery marxophone. Something of a restless farewell, the lyrics attempt a bit of rapproachement; “Babe, we could have made it easy, couldn’t we? Now I will never know you, you were just someone passing by/And it makes me sad to think about all the stories and the fates that I’ll be without, but I think I’m getting used to the silence now.”

Finally, the melody and arrangement on “Hem Of Her Dress” is a woozy tip of the hat to the sui generis pleasures of Neutral Milk Hotel. Jangly acoustic guitar circle plaintive vocals, a kick drum beat, lurching keys and swooping strings, along with mandolin, trombone and dulcimer; even as the lyrics seem to cycle through the five stages of (break-up) grief: anger, denial bargaining, depression and acceptance, the calibrated chaos distracts from the misery.

Two songs, “It’s A Shame,” and “My Wild Sweet Love” navigate the devastating lows and manic highs that accompany any break-up. The jaunty melody of “…Shame,” is tethered to a galloping gait. Striding pedal steel collides with kaleidoscopic keys that recall the wild thin mercury that colored Bob Dylan’s mid ‘60s sound. It nearly camouflages the lyrical sturm und drang that resentfully juxtaposes post break-up despair with the perpetually sunny surface of Los Angeles; “In L.A. the sun’s almost too bright, I cannot get it right/The emptiness I feel, and now none of it’s real.”

Meanwhile, on “…Sweet Love,” the emotional thunderclouds part (briefly). Over a pulsating beat and twinkling piano the mood is vaguely philosophical; “Will I know what this all means when we’re a hazy memory, with all the colors of a dream my sweet love.”

The best songs here are “Postcard” and the title track, “Ruins.” The former is a twangy two-step anchored by Honky Tonk piano notes and misty pedal steel. Lyrics that address Klara’s ex are equal parts bitter and sweet; “Honey, now that your shackles have been lifted, you’re a sweet young thing and you’re oh-so gifted, will you let me know if things turn bad??I wasn’t looking for trouble but trouble came, I wasn’t looking for change but I’ll never be the same/But life’s not what you make it baby, send me a postcard when you get where you’re going, send me a line to everything you’ve left behind.” It’s nice to find that when the dust settles, romance can give way to affection. The song, written following a particularly inspiring Lucinda Williams concert features the non-sequitur shout-out, “Pick it for me, James” that precede a guitar solo. That actually references an infamous Gram Parsons ad-lib to guitarist James Burton.

The latter blends a burbling beat, wobbly synths and keys, electric and eBow guitar over lush strings and woodwinds. The lyrics actually turn a corner. Parsing the past but resolutely looking forward. “Today I climbed the highest mountain I ever climbed, and I turned to look at ruins I had left behind/And you, where were you, so far removed from any truth, I lost you didn’t I? but first I think I lost myself.” Of course, the loveliest part is the Sisters’ sororal harmonies which yodel one minute and catch with emotion the next.

The album closes with the stripped-down beauty Of “Nothing Has To Be True.” Powered by stark piano, lapping acoustic guitar, plus pedal steel, cello, viola, violin and pump organ, lyrics like “I give in so easily, and I give up instantly, I chase what is gone and my friends are getting tired of the shit I pull” acknowledge (to paraphrase the Doors and Mr. Mojo-Risin’) there’s no more time to wallow in the mire.

Despite the through line of romantic catharsis, Ruins is actually First Aid Kit’s sleekest effort to date. That doesn’t necessarily make it polished. There are plenty of (endearing) rough edges to be found. These Swedish Sweethearts of the Rodeo take the listener on a tumultuous emotional journey. It’s a richly rewarding ride.