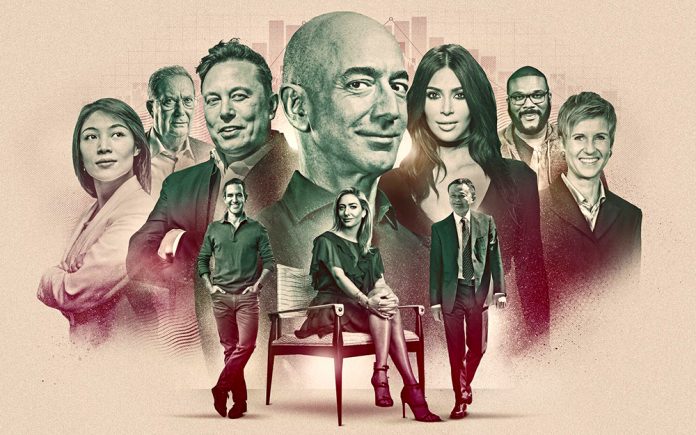 It’s that time of year again when Forbes publishes its lists of the wealthiest people in the world.  In its most recent issue, Forbes found that a new billionaire is minted every 17 hours.  This exclusive has 2,755 members – 660 more than last year. Billionaires as a group saw their assets grow by $8 trillion $13.1 trillion at the end of March.  To put this into some perspective, the Coachella Valley is home to roughly 400,000.  If the wealth of these billionaires was spread evenly across every man, woman and child in the Coachella Valley, each person would have $33 million.  A family of four would have a net worth of $132 million.

Using the ‘real time’ Forbes estimated of net worth at forbes.com/billionaires, the wealthiest of the wealthy is Jeff Bezos, the founder of Amazon at $177 billion, post-divorce.  His ex-wife MacKenzie Scott is worth $50 billion making her the 22nd wealthiest person in the world.

At $151 billion is Elon Musk, founder of Tesla.  For a short time, Tesla stock rose to a value that made Musk the world’s wealthiest person.  Musk moved from California to Texas prior to this rise in wealth to save billions in taxes.

Bernard Arnault, the CEO of LVMT Moet Hennessey saw his net worth double to $150 billion.  Last year, LVMT acquired Tiffany & Company, adding it to an impressive list of luxury brands controlled by Arnault.  Arnault started his empire in 1985 with $15 million from his father, the wealthy owner of a construction company.

In fourth is Bill Gates, the founder of Microsoft at $124 billion with Facebook founder, Mark Zuckerberg $1 billion behind him.

Everyone’s favorite grandfather, the Oracle of Omaha, Warren Buffett slipped to sixth amongst wealthy billionaires at $96 billion as his reached his 90th birthday.  Many people do not know that Buffett’s first job was working as a salesman for his father’s investment firm, Buffett, Falk & Co.

Seventh on this year’s list own Porcupine Creek as well as the BNP Paribas Open is Larry Elison, the founder of Oracle at $93 billion.  As his Rancho Mirage residence is turned into a luxury retreat, Ellison will be getting comfortable in his new $80 million mansion in Palm Beach, Florida.  How much do you want to guess that he will be changing his state of residence from California to Florida sometime soon?

In eighth and ninth are the founders of Google, Larry Page and Sergey Brin at roughly $90 billion each.

Rounding out the top ten Mukesh Ambani of India at $85 billion. He and his brother divided a family conglomerate.  Mukesh’ businesses include oil, cell phones and retail.

The richest woman in the world – Francoise Bettencourt Meyers, the granddaughter of L’Oreal, Eugene Schueller with $80 billion

Have you ever heard Dan Gilbert of Quicken Loans?  His voice fills the radio airwaves around the United States offering their mortgage loan services.  Gilbert is the 30th wealthiest billionaire at $46 billion.

The youngest billionaire at the age of 18 is Kevin David Lehmann of Germany.  He is the son of the 50% owner in Germany’s largest drug chain, DM (Drogerie Market).

The oldest billionaire is the founder of Mercury Insurance, George Joseph.  Worth $2 billion, Joseph is 99 years of age.

As this shows, those with money, make money while those without struggle.  This observation is nothing new although the concentration of wealth is reaching extreme conditions.  Here in the United States, 1% of the people controlled 46% of America’s net worth.  The top 8% in America control 86% of the wealth.