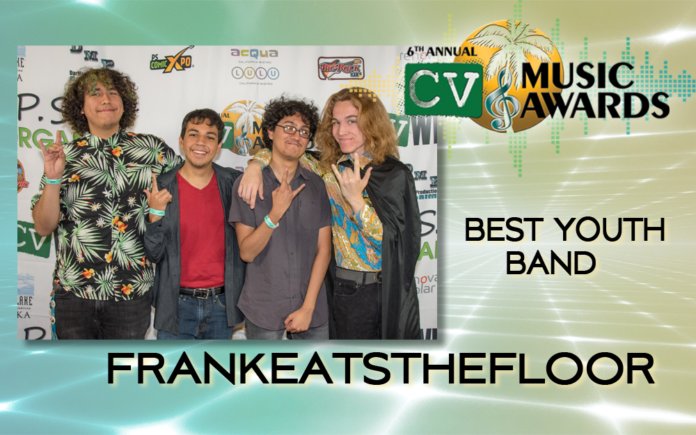 There’s a rumor that the name FrankEatsTheFloor was determined with the luck of the net by a prankish ‘band name generator’ website. Even if this is true, FETF have proven that Shakespeare was right…names don’t matter…all you need to know is what something is.

Desert rock group FrankEatsTheFloor won the 2018 Coachella Valley Music Award for ‘Best Youth Band’ and in doing so have placed themselves among some of the finest musicians in the valley. Matt King (vocals and bass guitar), Joseph Beltran (vocals and lead guitar), Alexander “Aleks” Romo (rhythm guitar) and Franky Altamirano (vocals and drums) are the cream of the crop when it comes to emerging artists and are out to prove their success is not fleeting. King shares, “Winning ‘Best Youth Band’ was an honor for us, especially since we were up against some very tough competition, but we are always moving forward and growing, and I think we have a good shot at becoming more and more recognized in the music scene.” Beltran concurs, “We’re just gonna keep giving it our all and having a good time.” Fans are feasting on FETF and the response has been outright positive.

FETF released their first EP in mid-2017. According to Beltran, the band has evolved since then, “We have bigger goals now than we did back then. Mostly, we have improved our ability to play, to be able to come together and create something amazing.” King adds, “This first year has been very eventful, but we have grown so much over this span of time and we have been able to constantly improve ourselves. We’re big boys now.” Already having played many of the desert’s live music venues and at the CVMAs, FETF have broken the proverbial ice. They continue to mature both in life and in music. Romo shares, “We’ve not only grown as people but as musicians. We’ve found ways to implement music more and more into our daily lives, and we are starting to see what kind of music we want to make. Growing up has brought us closer together and made us a better unit.” Coming of age collectively in the desert has created a rare bond within FETF.

Outside of FETF, its members enjoy that old teenage leisure activity…the mall. FETF enjoy going to Westfield Palm Desert and raiding Record Alley. Moreover, Altamirano admits, “My favorite valley pastime would have to be spending time with these guys. The band is my family and I love spending time with them even when we aren’t making music.” FETF may be wide-eyed but they stick together.

When not working on FETF each member has his own responsibilities and passions. King is looking forward to his senior year in high school where he is involved in the drama, improv, and filmmaking clubs. Altamirano also has his hand in the graphic arts with a focus on illustration. Beltran writes music both for the band and for himself.

Much has been said about their youth. Despite this, they have been at this for a while. King points out, “We have each been playing our selective instrument for 4-5 years, and

have been a band for about 2 years.” FETF is engrossed in the music community affiliating themselves with bands like Avenida and Sleazy Cortez. “Avenida are definitely our hometown heroes. They’re cool dudes who make awesome music,” Beltran responds. Avenida are also on the young side but have gladly stepped into the roles of big brothers. Altamirano concurs, “I have to give it to Avenida. Not only are they amazing musicians, but they’re also some of the most humble and kind guys I’ve ever met.” King discusses further, “Sam, Josiah, Vince, and Sean have been super helpful in our quest for music excellence! I’d also like to recognize Nick Hales and Derek Timmons of Sleazy Cortez who have been nothing but supportive of our musical endeavors.” FETF are influenced by both local and international artists. For King, the outlandish bassist of Primus is a main force. “Les Claypool is my idol; he’s part of the reason why I play bass. I also really like Randy Newman.” Beltran shares, “Hands down, Tosin Abasi from Animals as Leaders.” For Altamirano, the words are most influential, “Kristine Leschper from Mothers has played a big role in inspiring me in terms of lyrical content.” FETF are also the influencers. “It’s awesome to know that we are able to impact many of our friends and peers, but it’s mostly about having a good time playing good music,” King shares. Altamirano admits, “It would make me really happy if our music touched the hearts of people in our age group, but I’m also content with just writing music that’s true to the four of us.”

FETF are slowly becoming more multifaceted. Beltran explains, “Actually, we have incorporated Franky to sing some songs. We honestly just tell each other that whoever can sing and play a certain song should do it.” Romo adds, “What sets us apart from other bands is that we don’t have a specific sound. The older we get as musicians, the more that changes for each and every one of us, as we will all implement different messages and style into our music.” Having talent and a functional outlook will take them to the front of the line. “It’s awesome having such versatility musically, I just want Aleks to sing a song one day,” King declares.

With an ever-changing music business, how far can FETF go? Beltran shares, “If we worked really hard at making music the way we like, we can go really far.” King, agrees, “We were able to make it really far in two years, and if we keep this same effort up there’s no telling where we will be in five years.” It’s clear that FETF are stargazers. “Many people overlook the fact that music is always evolving, and I believe that we will be able to squeeze ourselves onto the airwaves in the future and I can become the rock star that ten year old me dreamed of being.” That vision has been fostered by a supportive network of key players.

FETF identifies deeply with the Coachella Valley, its music scene and those in it. King acknowledges, “Coachella is our home, and we are very grateful to have grown in this amazing community with it’s even more amazing music scene. CV Weekly, CV Independent, Lisa Lynn Morgan, Todd Killiam, Phil and Tracy, Esjay Jones, and so many others have been so good to us, and we hope to make them proud.” Altamirano admits, “I’ve never given much thought to how important the valley was to my identity. It’s just always been the place I lived in. It’s home for me.” Beltran is more blunt, “It’s hot as hell, but the desert will always be my home.”

FETF are currently working on their next EP that will be released soon with a release show at Record Alley. They will be performing next at the Not So Acoustic Palooza show at Big Rock Pub on 7/9/18 and are looking forward to the next CV Music Showcase. They have plans for shows in Los Angeles and beyond.

King is thankful overall for the support. “Just a big thank you to everyone who has supported us and given us opportunities so far. FrankEatsTheFloor is only getting started, so come see us at a show or check out our music online! We love you guys!”