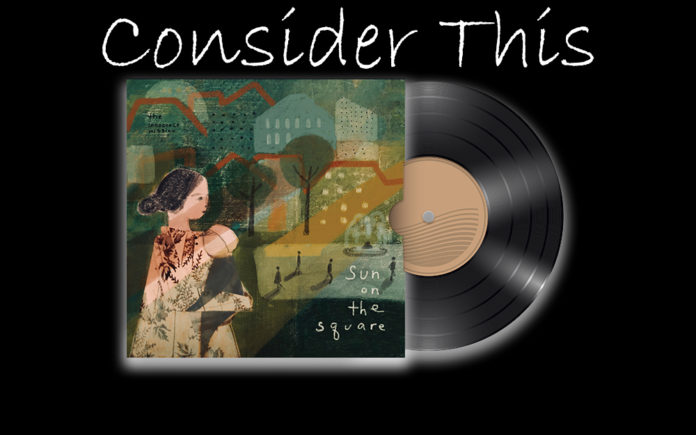 The dog days of summer are upon us. As triple digits hit, venturing outside can sometimes feel like a furnace blast of heat. It’s best to stay in, to hydrate and stay cool. Sometimes music can have the effect of aural air conditioning. A band like the innocence mission (they keep it low-key and lower case) has always made music that has conjured up images of icy lakes and snowy afternoons. Being a fan of the innocence mission takes patience as they are not what you would call prolific.

Growing up in Lancaster, Pennsylvania, Karen Perris (ne’ McCulloch) heard Judy Collins’ hit version of Joni Mitchell’s “Both Sides Now” on the radio, it was probably her earliest musical epiphany. Her older siblings had always played Beatles, Simon & Garfunkel and the live CSNY record, and those became early inspirations.  Pretty soon she was figuring out chords on her brother Ric’s guitar. She got her one of her own for her 10th birthday.

A few years later, while attended Lancaster Catholic High School, she participated in the school’s production of “Godspell.” It was there she met drummer Steve Brown and bassist Mike Bitts as well as guitarist (and future husband) Don Perris. They quickly formed the innocence mission. For the next couple of years they honed their sound playing high school events and local clubs.

After scattering to attend different colleges, the band reconnected in the late ‘80s and recorded a self-released EP, Tending The Rose Garden. This led to a management contract with Peter Asher (James Taylor, Linda Ronstadt), and a deal with A&M Records. Their self-titled debut was recorded in Los Angeles with producer Larry Klein.

Best known as Joni Mitchell’s husband (from 1982 to 1994), the bassist had already handled production chores for Cher, Don Henley, Peter Gabriel and Tracy Chapman. Released in 1989, the album managed to crack the Billboard Hot 100 and find a niche of the burgeoning Modern Rock and Triple A (Adult Album Alternative) radio formats.

Following a tour opening for Don Henley, the band hunkered down again with Larry Klein to record their second effort, 1991’s Umbrella. Sidestepping the dreaded “sophomore slump” the album quietly redefined the painterly quality of their debut. It’s success allowed critics to double-down on facile comparisons to like-minded acts such as 10,000 Maniacs, Mazzy Star and the Sundays.

The gamble paid off, released in early 1995, the album’s first single, “Bright As Yellow” peaked at #33 on the Modern Rock charts. Suddenly their music was gaining exposure through soundtracks like “Party Of Five” and “Empire Records.” The band toured extensively behind the record, headlining club dates and then opening for (new fan) Emmylou Harris. After more than a couple of years on the road, the band quietly disappeared, retreating to Lancaster, Pa.

When they emerged in the summer of 1999, they’d stripped down to a trio, amicably parting ways with drummer Steve Brown (who became a chef). They also ditched A&M Records once the label was subsumed in a merger with the Universal Music Group. Partnering with the indie label, Kneeling Elephant, they issued their fourth record, Birds Of My Neighborhood. A quiescent collection of Chamber-Folk songs the band produced themselves. Again they garnered rave reviews, and like Steely Dan and post-66 Beatles, they stayed in the studio, eschewing any real touring.

As the 21st century dawned, the band reaffirmed their Catholic faith by self-releasing a collection of hymns entitled Christ Is My Hope. The proceeds from the EP went directly to hunger relief charities, the only original song was the title track. 2001 saw the release of Small Planes, a surprisingly cohesive odds n’ sods compilation. Two years later, their beautifully bucolic Befriended album arrived.

For Karen and Don Perris, kids and family became the driving force in the lives, music, while important, had taken a backseat. So, it was surprising that fresh on the heels of Befriended the band returned in 2004 with Now This Day Is Over. Dovetailing nicely with their focus on domestic pleasures, the record offered up a collection of lullabies and standards included their gorgeous (and long revered) take on Henry Mancini’s “Moon River.”

The band closed out the decade with two more stellar efforts, We Walked In Song in 2007 and My Room In The Trees in 2010. In between, Don Perris released a few solo efforts and Karen also got in on the act, recording her first solo collection, Violet Blue in 2012.

2015 saw the release of their 11th effort, Hello, I Feel The Same and after a pretty quick turn-around (for them anyway), wrote and recorded their 12th long-player, Sun On The Square. The album opens with the tentative grace of “Records From Your Room.”

The listener is greeted with Finger-picked guitar, Karen’s dissonant mew and plinky, plaintive piano keys. A melancholy meditation on the power of music, the lyrics note that music allows us to feel things more keenly. Quietly, they ask “Is there a word for these things we’ve felt and we’ve seen, in the blocks of the town, the depths Of believe/The kindness of strangers in leaps and in ranges Where I’ve never been and you’ve never been before?”

The pure joy that has always emanated from the innocence mission’s music has been measured by the simple pleasures that life can bring. This rings true on two tracks, “Look Out From Your Window” and “Green Bus.” As spiraling acoustic guitar locks into a ¾ rhythm on the former, it is accented by a shuddery tambourine shake, timpani and tinkly piano. A Waltz-y Roundelay, the lyrics seem to address the Perris kids with the kind of parental affection and fealty that teenagers instinctively shy away from; “Look out your window now, can you see me cheering for you up and down? I holler across the park I’m waving these leaves.” On the instrumental break a viola stealthily shadow guitars that accelerate with a piquant, mandolin flavor. The song offers a final benediction; “All I cannot say I hope you know, all you cannot say I hope I can hear.”

Plucked acoustic filigrees power the latter. Delicate and intricate, the melody recalls the pastoral grace of Nick Drake. Meanwhile the supple instrumentation, which includes feathery guitar, haunting violin and quiet keys, manages a ye olde English verisimilitude. Leave it to the innocence mission to imbue a simple bus trip into town with the kind of ecumenical kindness that has all but disappeared from society. “What can I bring you,” she asks before she begins her quest; “Where will I find this, perfect and wondrous, I look into shops, I slip into rain/ Leaves on leaves I walk through deeply, gold, green, gold, for my friend/I cannot find a thing beautiful enough for you.”

In a record bursting with beautiful and brilliant songcraft, the best tracks unspool one after the next. The tinkling Classical piano notes and shivery guitar that open “Shadow Of The Pines” conjure up images of migrating birds. Plangent accordion gives the melody a Parisian inflection. The lyrics reflect loss and a deeply felt absence; “I hold you in my hearing, my sight, my every thought and wonder, since you’re leaving the shadow of the pines, some lost things I hope you will find.” Bereft, she confides, “So far I have only mangled the start of every song this winter.” As the drums kick in and the piano gathers steam on the wordless coda, a cascade of notes washes over the arrangement conveying an exquisite sadness that goes beyond words.

“Buildings In Flower” is anchored by sparkling bells, Rippling arpeggios and verdant piano. The lyrics obliquely wear’s the band’s spirituality on their sleeve with an eloquence and an economy of language. The images are deft and vibrant; “Will a lifting of a window let the Spirit in, and then we begin vividly to live? With lakes of orange, seas of green, cadmium scenes/I will hear everything you mean, I will see everything you mean.”

Finally, the title track is lithe and beatific, fueled by slipstitch percussion, darting piano and fluid guitar. The lyrics Paint in soft, watercolor hues, hinting at a celestial second coming; “The possible noon hour, the bells, the lemon-colored clang on the rooftops, footsteps in the sun…and he may be the one, he may be the one.” As violin and viola intertwine on the break, the tempo reaches a fever pitch before quietly exhaling.

Other interesting tracks include “Star Of Land And Sea,” which has a kind of Art Garfunkel-fronts-Big Star feel and Features Don Perris on lead vocals. Meanwhile, “Light Of Winter” re-purposes “From The Trains” (off The “snow on pi day” EP released in 2017), adding a Piano-driven patina to original.

There’s an ecclesiastic joy to the album’s final two tracks. On “An Idea Of Canoeing,” Guitars strum, chime and ring, kick-turning from verse to chorus. Even as the vocals feel impossibly fragile, there’s a tensile strength that belies the palpable yearning conveyed here; “Will I see you walking now, and will I be reaching out here and now?”

“Galvanic” closes the record with a note of optimism. Fluttery guitar encircles muted piano notes that hopscotch over the melody. With none of the sudden drama the title promises, the listener can take comfort from lyrics like “…The healing has now been authorized…I believe we’re going to see things will come right this time.”

As usual, Karen Perris handles guitars, piano, pump organ, accordion and voice, Mike Bitts plays upright bass and Don Perris is in charge of guitars and drums. It’s a bit of a family affair with Don and Karen’s kids, Anna and Drew adding viola and violin to select tracks.

Currently, the country is settling into this new age of incivility, garish displays of vulgarity and the crass coarsening of our daily discourse. The seven daily sins; pride, greed, lust, envy, gluttony, wrath and sloth have gone into heavy rotation over at 1600 Pennsylvania Avenue. Now more than ever, music lovers should embrace the achingly pure sounds of the innocence mission.

Sun On The Square is equal parts ethereal and ephemeral, spiritual yet never preachy. On the title track they plead “let there be more kindness in the world.” Listening to this record, that sentiment almost feels possible.