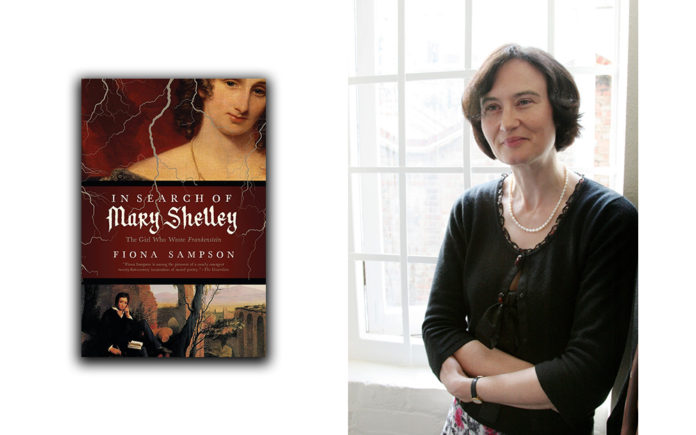 —–
In Search of Mary Shelley
By Fiona Sampson – Nonfiction
—–

Mary Shelley was born in 1797 to progressive parents.  Her father and mother were both considered intellectuals and “radicals.”  William Godwin and Mary Wollstonecraft were philosophers, political activists and atheists.  They were significant and well-respected writers who contributed reformist ideas to the European populace.

Wollstonecraft was an advocate for women’s rights and equality.  Her work is considered a major influence in the feminist movement.  Mary’s mother had her first child out of wedlock sired by an American diplomat and businessman.  She felt no need to marry the man.

Mary’s father was known for creating the anarchist movement.  The Wollstonecraft-Godwin household had friends from all over the world visit to talk about ideas.  Mary’s parents did not marry until late in the pregnancy.  Sadly, Wollstonecraft died less than two weeks after giving birth to Mary.  She was 38.

Growing up in a household visited by major influencers, authors and intellectuals, Mary’s childhood was filled with books, creativity and ideas.  Her father remarried and Mary had the quintessential evil-stepmother.

At sixteen, Mary meets Poet Percy Bysshe Shelley who is an admirer of Godwin.  They elope and marry a few years later.  They have an open marriage and Mary’s stepsister is a constant companion even sleeping in the same bed.

While in Switzerland, the trio spends time with Lord Byron and others.  During a horrendous lightning storm while reading German ghost stories, they decide they should each write a terrifying tale.  Mary is the only one to follow through.  Her book is Frankenstein.

Within three years, Mary is pregnant five times.  While writing her seminal manuscript, she is pregnant and gives birth to the only child to survive into adulthood.  Over the course of bringing her book to life, three children die.

Meanwhile, Percy travels around Europe to avoid creditors and debt-collectors sleeping with whomever he chooses.  After he dies at sea, Mary returns to England to pursue her writing career.  She is only 25 years old.  Mary continues to publish work through her 30s but nothing as significant as Frankenstein.

In Search of Mary Shelley is a minutely detailed and overwhelming read.  There is so much in this book that I often felt lost and wondered where indeed Mary Shelley could be found.   There is a tremendous amount of material on Percy Shelley and the other poets of the time.

Author Sampson is a poet scholar and her perception into these men is significant and revealing, but I did not feel that I was getting an intimate understanding of Mary Shelley herself.  I certainly came to know Percy well.

Sampson documents Mary’s early life, which is fascinating and clearly shaped the young girl.  Mary is aware that her life began with a matricidal birth.  Religion in her home is perceived as totally unreasonable.  She takes to heart her mother’s feminist views, but when her father remarries her reality changes.  Mary is eager to get out of the home that her stepmother controls and that’s only through marriage.

What is truly remarkable is that Mary, in a short three years, lives so many intense and difficult moments all while working on her masterpiece.  Yet, I hardly felt I got the complete impact on her personal life, even when the author interjects Mary’s own words.  I was disappointed that Mary never became a fully actualized person.  Men dominated her life.

There are details such as the summer Mary begins Frankenstein, a volcano eruption blocked out the sun generating crop damage and a fierce winter.  The Shelley’s were vegetarians, which made it hard to get adequate nutrition. Rivers were frozen over.

The cast of characters and their lifestyles are a sordid on-going soap opera.  Yes, I know more about the players in Mary’s life and how she matured into a woman, but none of that gave me a deeper understanding of who she really was as an independent person.

There is rich history throughout the book that provides awareness into the changing culture.  Mary is born into the era of science exploration and investigation like electricity and human physiology.  But with the dawn of the Victorian age and religiosity, women’s rights, sexual freedom and science become criticized and condemned.

Once in a while, Sampson includes her own insight and shares a provocative opinion that I found compelling.  Although I know a great deal more about Mary Shelley, I still don’t feel as if I know Mary Shelley the young woman and genius author.

The reader never gets a picture of the success of Frankenstein during her lifetime or how much money she made then — or her estate now.

The author concludes that it is Mary Shelley’s work, which inspires the era of new fiction like Dickens, Hugo, Cooper, Hawthorne and Poe.  Yet for women writers like the Bronte sisters, they must assume male pseudonyms to publish their work.  Several steps back from the work of Mary and her mother.