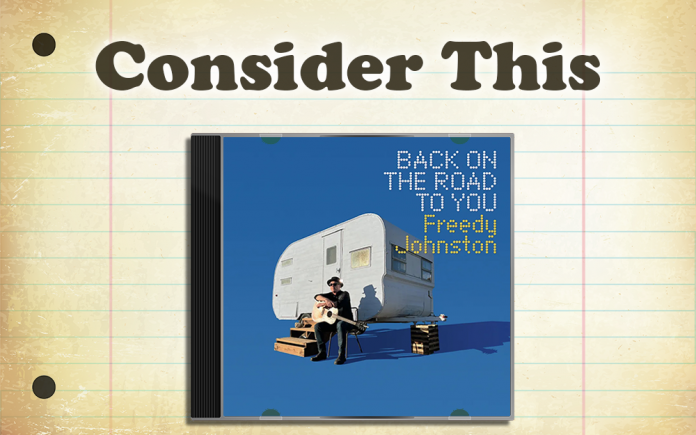 30 years ago, it seemed as though Freedy Johnston burst on the scene with his brilliant record, Can You Fly. Not only did it end up topping annual critics’ polls, it also garnered airplay on Triple A radio stations (Adult Album Alternative -I know, that moniker seems smug, super-specific and condescending- but where else would you hear Iris Dement, Marvin Gaye and Television? But, I digress…), as well as carefully curated MTV series like 120 Minutes. In reality, that album came about after nearly a decade of hard work.

Frederic John Fatzer was born in 1961 and grew up in Kinsley, Kansas. He displayed an affinity for music early on and by age 16, he purchased his first guitar via mail order. There wasn’t much of a music scene in his hometown, in fact, a year after he learned the guitar, he asked a friend to drive him 35 miles to the closest record store, so he could buy a record he’d been reading about, Elvis Costello’s debut, My Aim Is True.

He briefly attended the University Of Kansas in Lawrence, where he dug into the music of Tom Petty, Tom Waits and The Replacements. By 1985 he had relocated to the East Coast intent on pursuing a career in music. During childhood, his mom had nicknamed him Freedy and the moniker stuck, he added her maiden name Johnston, and viola! Instant nom de Rock! Soon enough, he signed with esteemed indie label Bar/None. 1990 saw the release of his debut, Trouble Tree, but two years later he really made his mark with Can You Fly. Critical acclaim was universal, and the record sold a respectable 40,000 copies. His sound, a wry amalgam of Folk, Country, Pop and Rock, coupled with his deft, novelistic lyrics, evoked comparisons to idols like Elvis Costello and Bob Dylan.

It wasn’t long before he was opening for acts like Soul Asylum, The Lemonheads and Matthew Sweet. Major labels came a’ courtin, and he signed with Elektra. Producer Butch Vig, who had been behind the boards with Grunge Gods like Nirvana (Never Mind) and Smashing Pumpkins (Siamese Dream), leapt at the chance to produce Freedy’s first Elektra effort. Bad Reputation arrived in late 1994 and once again, garnered rave reviews, prompting Rolling Stone to declare him “songwriter of the year.” The title track climbed to # 54 on The Billboard Hot 100 chart.

Throughout the ‘90s, Freedy released stellar albums like 1997’s Never Home and 1999’s Blue Days Black Nights, continuing his streak of excellence. His music also began popping up in hip indie films like Heavy, Kicking And Screaming, Kingpin and Things to Do In Denver When You’re Dead. His final album for Elektra, Right Between The Promises, released in 2001 wed idiosyncratic character studies to wildly accessible melodies.

Freedy slowed his roll slightly in the early aughts. He released a couple of live outings, Live At 33 1/3 and Live At McCabe’s. 2007 saw the arrival of a covers album, My Favorite Waste Of Time, and three years later he was back with a proper studio album, Rain On The City. Neon Repairman appeared in 2015. In 2009, he began collaborating on and off with Austin Texas singer-songwriter Jon Dee Graham. A few years later they roped in Susan Cowsill, becoming The Hobart Brothers and Lil’ Sis Hobart. Each taking a turn on lead vocals, their long-player, At Least We Have Each Other, came out three years later. Now seven years after his last album comes his long=awaited 10th album, Back On The Road To You.

The album kicks into gear with the title track. Banjo-riffic guitar collides with searing steel guitar riffs, angular bass, murmuring electric piano and a see-saw beat. Freedy offers up a declaration of love that hews less toward gooey romanticism and more toward gimlet-eyed pragmatism; “I don’t remember why, but I remember when you said you’d never see me again, man, after everything I put you through /But you’re the one I need, you’re the one I want, and you still got a lot of my stuff, baby, so I’m back on the road to you.” His still-boyish tenor and the buoyant melody come close to camouflaging his craven intentions. On the break, jaunty electric piano notes execute a swirly do-si-do atop some spiky steel guitar.

Three songs finds Freedy enlisting some fairly famous pals to add their voices. First up is “Darlin’,” with Aimee Mann. The erstwhile ‘til Tuesday vocalist first embarked on a solo career in the early ‘90s. She has since earned an Academy Award nomination for Best Song from the Magnolia soundtrack in 1999. She has consistently released smart, sharp and melodic records. “Darlin’” begins tentatively with plucky acoustic notes, bloopy keys, brittle bass lines, meandering steel guitar and a sturdy backbeat are quickly folded in the mix. Aimee’s supple voice blends beautifully with Freedy’s elastic croon. Lyrics offer some emotional rescue, following a devastating loss; “You know you did everything you could, Darlin,’ and none of it ever did any good Darlin,’ He’s gone and it’s not your fault, he could not live cause he could not stop, everything’s going to be alright in the morning.”

Susanna Hoffs achieved superstardom as part of the Bangles, but in between band commitments, she has managed to carve out a rewarding solo career. She’s on-hand for “That’s Life.” Burnished piano chords intertwine with high lonesome steel guitar, feathery acoustic licks, pliant bass and a barely-there beat. Although he’s neither “riding high in April, nor shot down in May,” Freedy has some hard-won wisdom to impart; “There’s a moment when you’re born, and there’s a moment when you’re not here anymore, between there are shadows and bright sunshine, Hey, that’s life.” Susannah’s ardent soprano shadows Freedy’s helpful homilies on the verses as sparkly electric riffs, a bit of Honky-Tonk piano and barbed steel guitar notes envelope the break.

Finally, the indominable Susan Cowsill is on hand “The Power Of Love.” Not only was she part of the supremely talented Sunshiny/Power Pop family band, The Cowsills (which included the protean talents of her five older brothers, as well as her mom), she’s also a critically singer-songwriter in her own right, and half of The Psycho Sisters, a duo that consists of Susan and Bangle/sister-in-law, Vicki Peterson. “Power…” blasts out of the speakers, courtesy slashing guitars, ramshackle bass, plinky-plunky piano and a cantilevered beat. Freedy and Susan’s rollicking harmonies achieve a spectral, Wall Of Sound density that elbows its way through the stripped-down arrangement. Lyrics offer a panacea for all of the world’s aches and pains: love; “We have been singing into the void to pull you out of a heartache, follow along with the song, and you will find your way to the daylight, see if you’ve been around the universe, you know everything runs on love, from the deep blue sea to the clear blue sky above.” Hard-charging guitars bluster on the break. As Freedy and Susan urgently echo the title, a Byrdsy guitar solo takes flight, ushering the ambitious track to a soaring close.

The best tracks here draft off Freedy’s signature sound but manage to add new colors and textures to his sonic palette. Take “Madeline’s Eye,” which could almost be a companion piece to “Back To My Machine” from his Right Between The Promises album. A pummeling back beat pivots off darting keys, spiraling rhythm guitar and boinging bass. Steel guitar riffs, equal parts Tropicalia and Twang, ride roughshod over the arrangement. Lyrics confirm that title isn’t a typo. He’s not gazing longingly into her eyes, he’s actually just looking at the one, as Madeline is an animatronic companion whose settings need recalibrating; “She’s a unit I bought on time, with a face from a long-lost dream, when she tells me how she feels, man she’s almost real.” The wily steel guitar solo on the break can’t disguise the fact that he’s not even equipped to handle the emotional demands of a mechanized woman; “Looking in Madeline’s heart, Madeline’s heart, I see the problem right from the start, she’s wondering why and she’s wondering when, so I set her on default again.”

There’s a breezy and Baroque, Bacharach-ian lilt to “Somewhere Love.” Liquid acoustic arpeggios lattice atop sunshiny electric guitar, thrumming bass, swoony strings, toy piano and a hi-hat kick. Encouraging, slightly cryptic lyrics could be addressing an ex, or a kid; “Somewhere love, somewhere underneath this beautiful sky above, and someday baby, I know you’re gonna see all we wanted for you was to be okay and to walk in the son another day/But until then you gotta try and you gotta understand, you always give a call if you ever need a hand, you know me, I’m always your bigger fan, I’ll see you somewhere love,” it doesn’t make much difference. The aural tableau has been set, between the gorgeous melody and the gossamer arrangement, the listener is instantly transported to a more elegant era. Gauzy electric piano partners with wobbly wah-wah guitar, shivery strings and tumbling drums on the break, for this musical Shangri La. Finally, there’s the snap, crackle and pop of “Brooklyn Girl.” An instant classic powered by a tic-tac-toe beat, Jangly electric guitar, rippling rhythm riffs, woozy keys and walking bass lines. Lyrics simultaneously parse the vagaries of love and paint a vivid portrait of hipster bonhomie; “There goes a Brooklyn girl, there goes my baby, she just told me she’s the one who’s gonna save me, she’s always sayin’ that it’s already been done, turning around and blowing me a kiss at the corner, then she’s off into the crowd/And I’m singing bye-bye baby, bye-bye baby, goodbye, and the city’s waking up around me as I’m walking back inside, you know it’s hard to know, and it’s hard to be the one who know, but it’s easy to say hello Brooklyn Girl, when the sun is low, how’d it go?” Much like Elvis Costello’s “This Year’s Girl” and Marshall Crenshaw’s “Cynical Girl,” the object of Freedy’s affection is an enigma always slightly out of reach.

Other interesting tracks include the Memphis muscle of “Tryin’ To Move On” and the wistful skepticism of “Trick Of The Light.” The album closes with “The I Really Miss Ya Blues.” Spiraling rhythm guitar partners with kaleidoscopic keys, wily steel riffs, tensile bass lines and a sturdy beat. Lyrics address wistfully an absent love who remains ever-present in his thoughts; “Today I thought I saw you again, and I almost said where you been, you know the days aren’t quite so bad, but the nights are kind of sad, and there ain’t nothin’ I can do, for these I really miss ya blues.” It’s a bittersweet end to a stellar record. This is a solo album in name only. While Freedy tackled rhythm guitar, lead and harmony vocals, he corralled a together a wolfpack of talented pickers and players to flesh out his sound. They include bassist Dusty Wakeman, guitarist Dou Pettibone, drummer Dave Raven and Sasha Smith on keys. Stevie Blacke handled strings and string arrangements and Wally Ingram added percussion.

Back On The Road To You continues Freedy’s rich tradition of matching nuanced narratives and crackling, cogent melodies to graceful arrangements. There’s a measure of melancholy that threads through each song, rendering them all the sweeter. Wry, regretful, introspective and observant, his tender vignettes are indelible. 30 years after his watershed Can You Fly album, this new one reminds you exactly why you fell in love with Freedy Johnston in the first place.