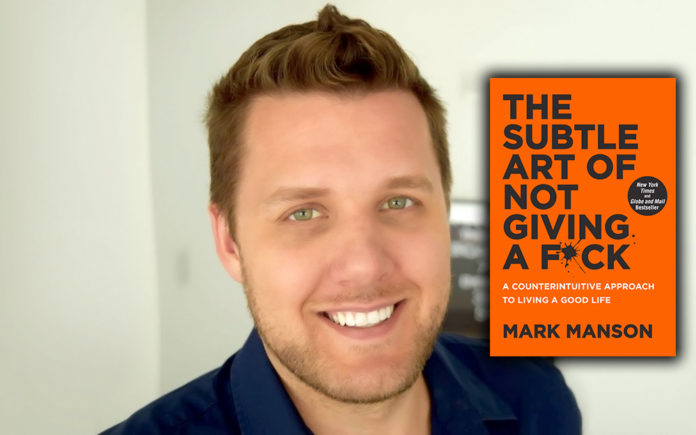 The Subtle Art of Not Giving a Fuck

The world is complicated and more than ever it seems the emotional, religious and racial divide between human beings is widening.  At times, it’s challenging to stay focused and be positive about the future when so much global strife bombards our reality.

Mark Manson’s The Subtle Art of Not Giving a Fuck: A Counterintuitive Approach to Living a Good Life (HarperOne, 212 pages) provides an enlightened methodology for living without fear.

“Not giving a fuck” at first appears to be a very enticing way to live.  Wouldn’t it be great to shut out the crazy world, and all its dumbasses and only focus on a select few personal matters?

However, The Art of Not Giving a Fuck is really about embracing life fully and caring deeply.   To give or not give a fuck turns out to be a paradox.

As the subtitle suggests, this self-help book is indeed counterintuitive.  It is also unconventional.

Author Manson suggests in order to really “not give a fuck,” one must completely ditch entitlement, take total responsibility for actions regardless of fault, own choices, deal directly with problems and acknowledge life is terminal.

Manson makes his case for self-improvement using five “counterintuitive values” or “backward laws” meaning although the advice may seem negative, unconventional and uncomfortable, they can be life-changing, renewing and rewarding.

The idea is to confront deeper problems in order to create a more honest and centered existence from which one can discover what is truly important — to be able to give or not give a fuck.

This book is fresh, surprising and seriously insightful.  Mason confronts self-help clichés that will jolt you.  For example: “Trust your gut.”  Manson says trust yourself less!  Our hearts and minds are not reliable.   It is better to question our intentions and motivations.  Self-skepticism, challenging one’s beliefs and assumptions, is “the only logical route to progress.”

Another provocative Manson quote is: “The pursuit of certainty often breeds more (and worse) insecurity.”  Manson recommends creating a “metrics” to define yourself in mundane and broad ways.  “The narrower and rarer the identity you choose for yourself, the more everything will seem to threaten you.”  An interesting idea to contemplate for sure.

Author Manson does not coddle the reader.   He writes, “This book doesn’t give a fuck about alleviating your problems or your pain.”  And it is not a guide to “greatness.”  Manson states: “This book will turn your pain into a tool, your trauma into power and your problems into slightly better problems.”

It is important to recognize that Manson is a millennial.  He grew up in the era of everyone is “special” and a “winner.”  After an existential crisis and being jobless after college (on the cusp of the economic collapse), Manson confronted his existence and realized he had to live his life.  He could either learn from his mistakes and move forward or go nowhere.

Manson is not a psychologist.  The book gives no information on his academic accomplishments or mentions mental health credentials.  The dust cover only states he is a blogger.  For some this may be problematic.

However, that fits Manson’s paradigm.  He does not give a fuck if you read his book or not.  You will either relate to what he has to say or you won’t.  If a lack of credibility is a problem for you, he doesn’t care.

At first, the book has a snarky attitude – foul language and a tad bit of badass demeanor, although it’s all in good humor.  But stick with the read because Manson gets more profound and his ideas become focused as he makes his case for a better way of life.

I wish Manson had included footnotes and an appendix.  Not only would it help with any credibility issues, but the references, quotes and sources he uses in the book are intriguing and worthy of further reading and exploration.

I found The Art of Not Giving a Fuck to be thoughtful, realistic, bold, and achievable.  I especially appreciated the chapter on death.  It is a subject so rarely discussed outside of manuscripts on grieving.  There are dynamic models and fascinating illustrations throughout the book.  Manson is bright, and more importantly, he is sincere.

Speaking as a millennial, Manson is not only providing help for his peers (and other groups), but gives the reader a view into the mind-set of a generation that is now taking its place in the world of business and politics.  They will soon be the new power brokers and decision makers.

To be a mature, self-actualized, responsible human is a constant challenge for people of all generations.  Author Manson tells it like it is.  Life is not easy, it’s always going to present problems, we will suffer, and we will die.  The art of not giving a fuck is to live a generous and full life without fear of the past, present and future.