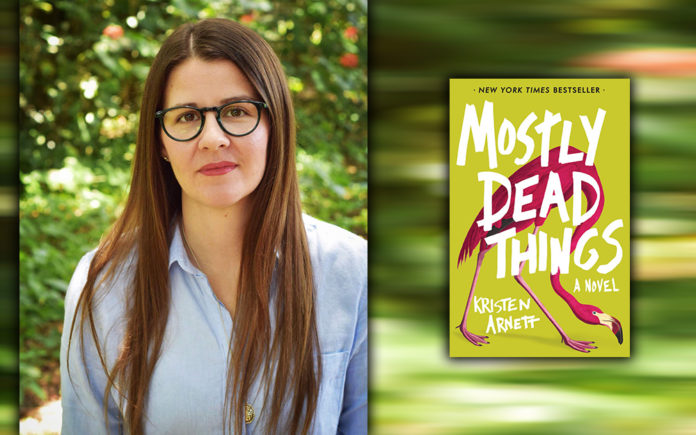 There was a time when a family business was passed from generation to generation. Typically, the son would learn his father’s trade, and he in turn, would one day teach his son.  Many successful businesses still function this way.  In Kristen Arnett’s Mostly Dead Things (Tin House Books, 356 pages), a woman must come to terms about passing along the family taxidermy shop.

Jessa Morton’s father decided his daughter was more cut out for taking dead animals apart and putting them back together again, than her brother Milo.  So, Jessa learned the taxidermy trade at a young age following in her father’s and grandfather’s footsteps.  Animals that her grandfather stuffed still took up space in the shop.  Her father and grandfather were known for their creativity and expertise.

After Jessa’s father takes his own life — at the office — Jessa must run the family business.  One day, Jessa’s mother sneaks into the shop and creates an obscene diorama made from the stuffed animals lying around and displayed it in the storefront window.   The image goes viral, and a woman from a new art gallery wants to feature Jessa’s mother’s unique work.

Jessa thinks her mother has lost her mind.  She gathers the family, her brother, niece and nephew, to try and stop the exhibit.  But, it gets complicated as Jessa becomes involved with the gallery owner, while also trying to earn a living and pay the bills.

The family is forced to confront the father’s suicide, as well as the family dysfunction that manifested over the years and left them emotionally crippled.  Together, they work out a future that can benefit them all.

Jessa is a fresh character.  I appreciated her integrity as she does her very best to work in a field that is gruesome as well as beautiful.  She never doubts her ability and she recognizes her skills are unique.  Jessa comes to realize she does not have to do it all alone.  Her nephew and young niece are happy to be a part of the family business — maybe too happy.  Sometimes killing animals to stuff them.

I also liked the changing relationship between Jessa and her brother Milo.  I liked Milo’s laidback style. The siblings are complete opposites, yet have been in love with the same woman, Brynn, since childhood.  But it was Milo who married Brynn and had kids with her.  Even though Jessa and Brynn continued to have sex.  Unfortunately, Brynn  abandoned them all.  This shared loss brings the family even closer.

Author Arnett does a wonderful job sharing Jessa’s world and her complicated love life.  Her same sex relationship with Brynn, which she believed was a secret, was not. Turned out that everyone knew.  Jessa’s regret and acceptance of who she is and her discovery of what she truly wants is a lovely journey.

However, as much as I enjoyed getting to know Jessa, the taxidermy details were hard for me to take.  It was far more graphic than I had expected, and I can’t stand to see any living thing in pain or harmed.  I have a new appreciation for good taxidermy and what goes into it – literally.